Antarctic Wildlife: a visitor's guide to the wildlife of the Antarctic Peninsula, Drake Passage and Beagle Channel, by James Lowen 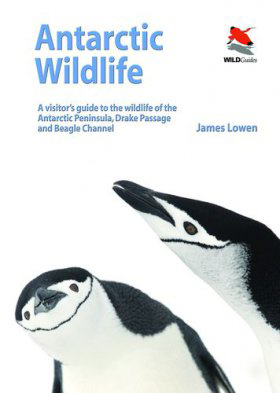 WILDguides, 2011; Pbk; 240pp, 350 colour photos, 35 colour illustrations; ISBN: 978-1-903657-32-4, Subbuteo code M20820, £17.95 My first encounter with the Southern Ocean was sailing from Southampton to Antarctica in 1970. The only guide we had was Alexander's Birds of the Ocean, and we struggled to identify many of the birds we saw. Since then several new guides have appeared, most recently Shirihai's outstanding Complete Guide to Antarctic Wildlife (A&C Black, 2007), and we have also made great strides in our understanding of the identification and distribution of Southern Ocean seabirds. Many birds previously thought of as rare or unusual are now seen routinely from the research vessels and tourist ships that visit Antarctica. This new guide takes a quite different approach from that of all previous guides to the area, reflecting the rapid changes in field-guide format and philosophy of the past few years. The first section of the book (68 pages) provides detailed background information covering topics such as brief descriptions of the environment, conservation and tourism, including advice on how to choose a trip to Antarctica. These are very good, and include a nice clear introduction to the different groups of birds and marine mammals that are likely to be encountered. The main part of the book is divided into three sections, presenting the birds and marine mammals likely to be encountered in the Beagle Channel, the Drake Passage and at the Antarctic Peninsula. Each species has a short description, an outline of where to look for it, and a short 'talking point' giving incidental information such as the derivation of the name, behaviour, and so on. Opposite the description are a series of carefully selected, high-quality, photographic images, skilfully arranged as a montage against a background image representing the habitat. Personally I remain ambivalent over the value of photographs for identification, and this guide is a good example of their strengths and weaknesses. The cetacean photos are very good and, coupled with useful diagrams showing diving behaviour, will undoubtedly help with identification. While the seabird images are technically excellent, in my view the images of diving-petrels Pelecanoides do nothing to help with the identification of this tricky group, and the plate showing Sooty Shearwater Puffinus griseus and White-chinned Petrel Procellaria aequinoctialis makes two species which appear quite different at sea look almost indistinguishable. Furthermore, the tripartite structure means that some widely distributed species (for example, Kelp Gull Larus dominicanus) mentioned in only one section have to be searched for. Despite its title, this book is not a guide to Antarctic wildlife. Rather, it is intended for those with a general interest in natural history joining a cruise to the Antarctic Peninsula from South America and wanting a small guide covering the birds and animals they might see in this small part of Antarctica. In this the book succeeds admirably. I do feel, however, that the author has missed a valuable trick in not covering South Georgia, which is included on the itinerary of many Antarctic cruises. While some rarely recorded species are included (for example, Mottled Petrel Pterodroma inexpectata), there is no mention anywhere of commoner species such as Grey-backed Storm-petrel Garrodia nereis or South Georgia Diving-petrel Pelecanoides georgicus. These small points aside, the book achieves its aims and should sell well. Birders visiting other parts of Antarctica, however, will probably choose to take Shirihai, if they can lift it. Andrew Clarke Buy this book from theÂ British BirdsÂ bookshop which is run byÂ Subbuteo Natural History Books This means thatÂ 5% of all sales generated byÂ British BirdsÂ subscribers, whether it is books reviewed in the journal, featured on its book page or listed on the Subbuteo website, will be paid toÂ British BirdsÂ - and will directly support the production of the journal. To browse the British BirdsÂ bookshop, please clickÂ here
Volume:
Issue 10