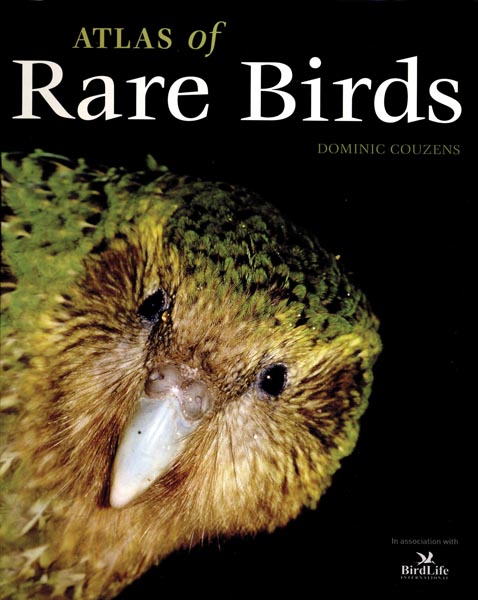 The title of this very enjoyable book is somewhat misleading. This is not a gazetteer of rare-bird sites but rather a collection of 50 extraordinary stories of birds on the verge of extinction - and some that have apparently already gone over the brink. There are (excellent) maps and they vividly illustrate the tiny ranges of so many threatened species, many of them single-island endemics. But this book is primarily a collection of intriguing tales accompanied by some superb photographs, many of which are the only ones of the species ever taken. Dominic Couzens has divided his 50 species accounts into ten chapters. All of the five species per chapter share a common theme. For example, those that are Back From The Brink (e.g. California Condor Gymnogyps californianus and Crested Ibis Nipponia nippon); those that face Threats In Many Guises(e.g. Tristan Albatross Diomedea dabbenena and Montserrat Oriole Icterus oberi); or, sadly, those that may be Lost Causes(e.g. Philippine Eagle Pithecophaga jefferyi and Spoon-billed Sandpiper Eurynorhynchus pygmeus). There are also Discoveries (e.g. Udzungwa Forest Partridge Xenoperdix udzungwensis and Araripe Manakin Antilophia bokermanni), Rediscoveries (e.g. New Zealand Storm-petrel Oceanites maorianus and Madagascar Pochard Aythya innotata) and Controversies (e.g. Spotted Owl Strix occidentalis and White-headed Duck Oxyura leucocephala). And then there are Unexpected Calamities (e.g. White-rumped Vulture Gyps bengalensis and Sooty Falcon Falco concolor). Many of these stories will be familiar to BB readers, but many will not be. What is familiar is the depressing litany of human activities that have driven all these birds towards extinction: hunting, habitat destruction, introduction of alien predators, pollution. Each of the species accounts is engagingly written and all are commendably up to date (the book was written in association with BirdLife International). And even the most well-informed readers are likely to learn something new about the species under review. Did you know, for example, how close the Laysan Duck Anas laysanensis came to oblivion? In 1930 this Hawaiian endemic was reduced to a handful of males and one female. She did nest that year but her clutch was eaten by a migrant Bristle-thighed Curlew Numenius tahitiensis! Happily, she laid another clutch and the Laysan Duck lived to fight another day. Today the duck has been introduced to Midway Islandfrom Laysan and the population is increasing. Meanwhile, the Bristle-thighed Curlew is declining... Much closer to home there are species deep in trouble, including Sooty Falcon, Bald Ibis Geronticus eremita, Houbara Bustard Chlamydotis undulata and Aquatic Warbler Acrocephalus paludicola. The Sooty Falcon is an intriguing species. It summers in the deserts of Northeast Africa and the Middle East before breeding in autumn to coincide with the southbound migration of its passerine prey. Then, like the ecologically similar Eleonora's Falcon F. eleonorae, it migrates to wintering grounds in Madagascar. Sooty Falcon was not regarded as a threatened species until recent survey work in Saudi Arabia suggested a population there as low as 500 pairs. A dwindling wintering population in Madagascar of just a few thousand was what first rang alarm bells. But why the species has declined is a mystery. And then there are the enigmas, the species that may have gone before we even realised they were in trouble. The Night Parrot Pezoporus occidentalis of the Australian desert, the White-eyed River Martin Pseudochelidon sirintarae only ever seen at one lake in Thailand, the Pink-headed Duck Rhodonessa caryophyllacea of Northeast India... the list goes on. Dominic Couzens places these tantalising species in The Pending Tray. More poignantly, perhaps they should be categorised as Gone But Not Forgotten. Read this book to remind yourself of what we've lost - and what we can still save from oblivion. Adrian Pitches Buy this book from theÂ British BirdsÂ bookshop which is run byÂ Subbuteo Natural History Books