A Bird Guide to the Fields of Experience 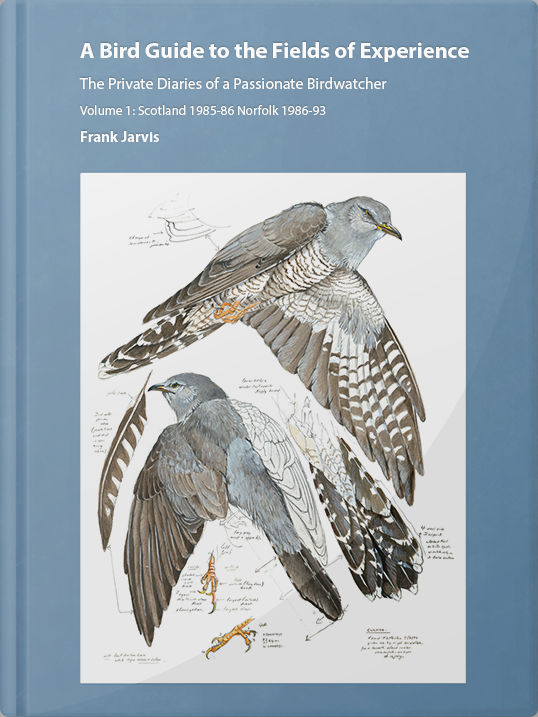 By Frank Jarvis Chatterpie, 2017; hbk, 152pp; numerous colour illustrations;Â ISBN-13 978-0-9957976-0-4 Â£24.00 âÂ buy it from the BB Bookshop Sadly, I never met Frank Jarvis, although I was well aware of his excellent artwork, the images of birds clearly being based on careful observation and field sketches. In all he kept no fewer than 26 field diaries and this book is based on just two of them. The subtitle of the book is âThe private Diaries of a Passionate Birdwatcherâ and covers Scotland in 1985â86 and Norfolk from 1986 to 1993. The book starts with a brief Introduction by his son Simon and widow Jane Ironside, a talented artist in her own right, and presents a resume of Frankâs life from schoolboy in Middlesex to artist in Norfolk, via travels across Europe, the Near and Far East, and in Scotland. The rest of the book is dedicated to extracts from his field diaries, illustrated on virtually every page with a mouth-watering collection of his pencil sketches and paintings. Putting aside for a moment the illustrations, I thoroughly enjoyed reading the extracts from his diaries, many of which brought back memories of the birding characters and species that he encountered during the late 1980s and early 1990s in Norfolk. It also made me realise just how much we have lost since those halcyon days, such as the Golden Orioles Oriolus oriolus at Hilgay Fen, Hawfinches Coccothraustes coccothraustes at Holkham Park, Turtle Doves Streptopelia turtur, Lesser Spotted Woodpeckers Dryobates minor and Willow Tits Poecile montana, to name just a few. It is clearly apparent from his writings that Frank was not in favour of certain birding practices as well as wildfowling, and this all adds to the amusing accounts of his days out in the field. However, the real joy of this book is the plethora of beautiful paintings and field sketches, from tumbling Red-billed Choughs Pyrrhocorax pyrrhocorax on Colonsay to a spinning Red-necked Phalarope Phalaropus lobatus at Cley. The upturned bill of an Avocet Recurvirostra avosetta is not always portrayed accurately, but Frank has captured it perfectly, while his drawings of Common Melanitta nigra and Velvet Scoters Melanitta fusca wing-flapping while on the sea at Titchwell, again shows his attention to detail in the positioning of their heads. Although the book purports to cover just Scotland and Norfolk, there are in fact several accounts of visits to Suffolk, and not all of the illustrations are from the years stated on the cover, but this does not detract from it at all. I know that for many years, Jane has been hoping to bring Frankâs diaries to a wider audience and Iâm absolutely delighted that she has at last achieved her ambition, even calling this book âVolume 1â. However, I am slightly concerned that it might be overpriced but only time will tell. One thing is certain though, everyone who has a copy of this book will undoubtedly enjoy returning to it time and time again. Moss Taylor
Volume:
Issue 11
Display Image: