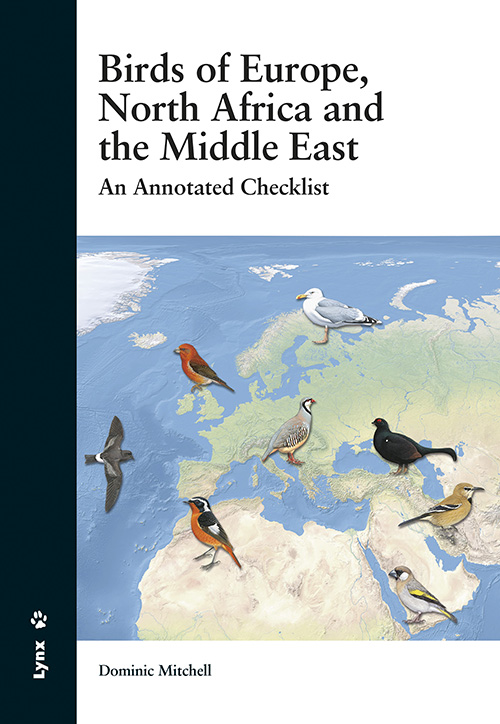 By Dominic Mitchell Lynx Edicions, 2017; hbk, 335pp ISBN 978-84-941892-9-6, Â£29.99 This book represents an extensively detailed checklist of particular use to the growing group of birders who keep a Western Palearctic list. Following IOC taxonomy and, for the most part, English names, the major part of the book details the status of 1,148 species that occur in the region, with brief notes on their distribution and taxonomy. For rarities, the number of accepted records for each country up to the end of 2013 is given. The cut-off for inclusion in the book is 31st December 2015, and some vagrants still under consideration by national rarities committees have been included. Drawing heavily on the work of national records committees, the book represents an enormous body of work by a single author, and is clearly a labour of love. There are appendices listing Western Palearctic endemics, extinct species, species that have been rejected for inclusion (with reasons) and a checklist with tick boxes. The geographical scope of the checklist continues the creeping expansion of the Western Palearctic. The author notes, but rejects, the carefully calculated avifaunal southern boundary to the Palearctic region defined by Roselaar (2006), choosing a more linear southern boundary centred on 20 degrees of latitude, but excluding Sudan and including the whole of the Arabian Peninsula. The whole of Iran is also included. These decisions open up boxes of Persian and Yemeni specialities for the competitive Western Palearctic birder and may help to drive the commercial success of the book. There are no plates â this is a reference book and should be valued as such. It is, of course, out of date already (this sort of rolling information is what the internet was invented for), but it represents a convenient and robust baseline list for Western Palearctic birders and many will find it useful. Roselaar, C. S. 2006. The boundaries of the Palearctic region. Brit. Birds 99: 602â618. Â Martin Collinson
Volume:
Issue 10