Birds of the United Arab Emirates, by Simon Aspinall and Richard Porter 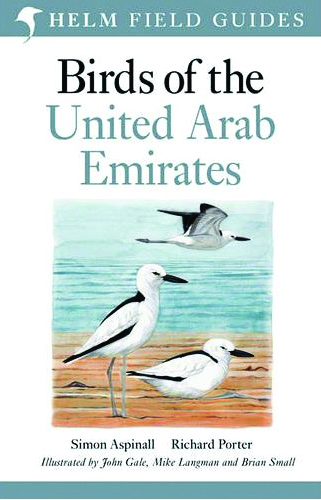 Christopher Helm, 2011; pbk, 240pp, 102 colour plates, maps; ISBN 978-1-4081-5257-7 Subbuteo code M21047, £24.99 It is no secret that Birds of the United Arab Emirates is closely modelled on the second edition of Birds of the Middle East, written by the same authors (see Brit. Birds 103: 737-738). The new volume, containing two-thirds the number of pages of the original, is now the ideal size for anyone with a few days to spend in the UAE (or elsewhere in the Arabian Peninsula). It is undoubtedly also a valuable reference for resident birdwatchers and longer-term visitors, being enhanced with useful, country-specific information. This is achieved in part by the addition of a status code and the redrawn maps, to show the status of each species within the UAE. The removal of species (from Birds of the Middle East) that have not occurred in the UAE makes for a smaller, lighter book, and the 'casualties' of the slimming process generally do not diminish the new book's worth. The shedding of four pages of gamebirds, for example, makes perfect sense, relegating the likes of Helmeted Guineafowl Numida meleagris to the 'miscellaneous escapes' section (although it does occur in a natural state in nearby areas of Yemen and Saudi Arabia) and removing alpine species unlikely to reach the UAE in a wild state. One minor disappointment was the omission of Swinhoe's Storm-petrel Oceanodroma monorhis, a species recorded regularly during pelagics into the Gulf of Oman from Muscat, and noted on five occasions during various UAE-based pelagics in August and September 2011. Larophiles will be relieved to find that the excellent comparison plate and table for large white-headed gulls is retained in full. One criticism of the plates in Birds of the Middle East was that they were slightly over-saturated, rendering feather detail difficult to discern, particularly on darker and more colourful species. The reproduction in Birds of the United Arab Emirates is a shade lighter, in my copy at least; plates featuring buntings, non-native weavers and many of the waders are among the most noticeable beneficiaries of this improvement. The plates themselves have not been redrawn, so the rather strange-looking streaked Acrocephalus warblers, the pelagic terns and one or two other peculiarities remain, though they hardly detract from the book's value. Indeed, it is very difficult to think of a country of similar size and population whose avifauna has been treated so thoroughly in a field guide. Simon Aspinall died shortly after publication of this guide (see Brit. Birds 105: 98-99). Simon dedicated half of his adult life to the birds, conservation and ecology of the UAE, and this book is a fitting tribute, illuminating as it does the avian riches of the country to birdwatchers and conservationists alike. Nick Moran Footnote: This is not the first book bearing this title. While focusing on status and distribution rather than identification, The Birds of the United Arab Emirates by Colin Richardson (Hobby Publications, 1990) provided an important foundation for much of the subsequent literature about the country's avifauna. Buy this book from theÂ British BirdsÂ bookshop which is run byÂ Subbuteo Natural History Books This means thatÂ 5% of all sales generated byÂ British BirdsÂ subscribers, whether it is books reviewed in the journal, featured on its book page or listed on the Subbuteo website, will be paid toÂ British BirdsÂ - and will directly support the production of the journal.
Volume:
Issue 6