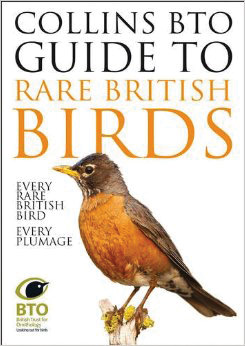 By Paul Sterry and Paul Stancliffe Collins, 2015; 304pp; over 700 colour photographs Hbk, ISBN 978-0-00-755154-5 Â£30.00 Pbk, ISBN 978-0-00-755156-9 Â£25.00 Since the 1950s, the association of Collins or the BTO with ornithological references has been a guarantee of their merit. So I had noted the announcements of two new Collins/BTO photographic guides with unusual interest but no prescience that I would be given both at the 2015 Birdfair. Pleased but also embarrassed, I offered to review the second, which addresses 340 rarer British and Irish birds. Of these, 151 non-passerines are featured, most of them with three images, before 139 passerines, most with two images each; after that, only eight of the 50 rarest species are illustrated within a very brief treatment. Even so, over 700 photographs of nearly 300 birds taken by Paul Sterry and over 50 other photographers is no mean offering in one handy book. To return the BTO's favour fairly, I first had to set aside my view that only truly gifted observers-cum-artists illustrate field guides really instructively. Although much impressed by the recent industry of Richard Crossley, I have found his plethora of images and short, challenging texts an uncomfortable mix. Hence my first scan of this book was nerve-wracking, but having gone more slowly through it (and its companion volume on commoner species - read the review on pp. 553-554), I started to relax. The authors' formula of fewer, closer birds and text with fuller sentences did feel more like home. Gradually, I began to find real gems of photographic instruction. The juxtaposition of Cackling Branta hutchinsii and Lesser Canada Goose B. canadensis parvipes was totally apt; the flying Spotted Sandpiper Actitis macularius was spot on; and when I got to the three flying Short-toed Larks Calandrella brachydactyla, I actually cheered. Since most of the photographs were new to me, their content was also refreshing. Looking more critically, I noted some choices of pose that did not actually illustrate linked characters and a few unfortunate processing errors or strange lighting effects. The latter glared in the flying drake Surf Scoter Melanitta perspicillata and Hoopoe Upupa epops and should really have been corrected. Rather more vexing was the authors' decision to feature mostly adult plumages or not those most likely to be worn by vagrants. Overall, however, the size and spacing of the images and their accurate colour printing conveyed most species' jizz and plumage detail very well. So what about the text? To be at ease with the text rhythms and contents, once again I felt the need to sample both volumes. In this one, I found the introductory guide to plumage topography, identification process and vagrancy vectors helpful. These and the interspersed well-constructed features on difficult tribes gave sound preparation for the individual species accounts. Their sequential discipline consists of English and Linnaean names, BTO code, length (but not wingspan), species capsule, plumage marks, main vocal clues, habits, status and habitats (but not peak occurrence periods). It worked well. Conversely in closer readings, I soon missed the (surely still helpful) italicised emphases of diagnostic characters. I was also miffed by the scarcity of notable behavioural actions - for example, no mention of tail dipping by either common or rare Chiffchaffs Phylloscopus collybita nor of tail spreading by both reed buntings Emberiza schoeniclus and E. pallasi. Such avian signals represent almost the last field-identification study wide open to amateur observers. Who better than the BTO to promote the challenge of its completion? (And to reduce the cloying overlay of DNA findings, which are provoking hedonistic split after split, and distracting us from a full perception of actual species recognition kits?!) My whinges apart and with young observers in mind, the Collins BTO Guide to Rare British Birds gets from me a full CREDIT. If revised additions appear in due course, as in other classic BTO guides, it could well complement the reigning champion Collins Bird Guide for many years. Already it sits beside the latter on my bookshelf, while the first volume has gone smartly on to my grandson. D. I. M. Wallace Buy this book from the British Birds bookshop, which is run by Wild Sounds
Volume:
Issue 11