The Eponym Dictionary of Birds 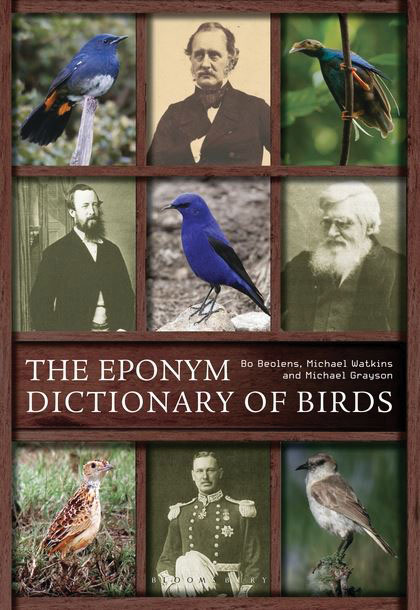 By Bo Beolens, Michael Watkins and Michael Grayson Bloomsbury, 2014; hbk, 624pp ISBN print 978-1-4729-0573-4, ePub 978-1-4729-0574-1, Â£50.00 This is the fourth in a series of eponym dictionaries that these authors have produced since 2009, the previous three covering mammals, reptiles and amphibians. Bo Beolens and Michael Watkins were also the authors of the excellent Whose Bird? (Brit. Birds 97: 151), so initially I wondered why a further volume was necessary. The answer is perfectly simple: the first book looked only at vernacular names whereas this one goes much further and takes in scientific names too. The result is a fourfold increase in both personalities and taxa. The figures are actually quite staggering: over 4,100 entries covering more than 10,000 genera, species and subspecies. We have, then, a major work of reference, a book to be browsed through and delved into and at the same time a source of all sorts of new information and, incidentally, much pleasure. They are all here, not just the ornithologists and the collectors, but also the doughty explorers, the wealthy amateurs, the assorted servants of Empire, the soldiers and the sailors, the long-suffering wives, the inquisitive clergymen, the backers and sponsors, and all the rest. Of necessity, the biographies are mostly brief, and in the case of many largely unrecorded individuals this may amount to only a few lines. I think the authors may be forgiven for rambling on a bit about such an extraordinary character as Charles Waterton, while allowing much less space to well-known historical figures like Napoleon or Queen Victoria. Remarkably, only 17 eponyms have completely defied their investigations and remain just names. I have learnt a lot from this book. I was not aware, for instance, that in looking up 'Wilson' I would be presented with ten different people, or in the case of 'Ross', to consult seven entries. To my surprise I also found that I know or have known or met at least 15 of the characters in this book, including three whose appearance here was unexpected - I had no idea birds had been named for them - there is even one with whom I have played cricket! My immediate thought is that I should recommend this book, despite its rather high cost. There is, however, an issue regarding accuracy, which is crucially important in a work such as this. For example, two sets of dates are given for the sixth Earl of Dartmouth, the second of which would have had him living for 136 years. If the dates are to be believed, then the ninth Earl of Dalhousie served under Wellington in the Peninsular War and at Waterloo before he was actually born. These might be down to carelessness, slipshod proofreading or lazy editing, or a combination of all three. Rather more worrying was the entry under 'Farquhar' where, if the authors had selected the correct Admiral of that name, it should have been obvious that a man born in 1855 would not be in command of one of Her Majesty's Ships in 1870, as the entry states! The Farquhar who fits their dates actually first commanded a warship in 1893: ironically, it was the sloop HMS Buzzard! Despite my general enthusiasm for this book, errors of this kind rather dented my confidence in it. Mike Everett
Volume:
Issue 5