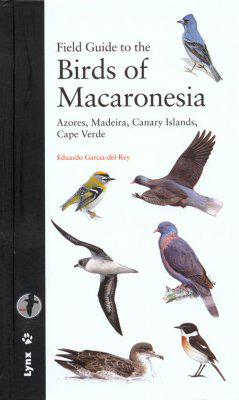 Lynx Edicions, 2011; hbk, 341 pp, many colour illustrations; ISBN 978-84-96553-71-2, Subbuteo code M20695; £24.99 This new field guide from Lynx Edicions is, in a sense, a spin-off from the Handbook of the Birds of the World (HBW) in that the vast majority of the illustrations used in the plates are taken from HBW. Apparently, a few additional illustrations have been commissioned to illustrate plumages or ages not available in the HBW plates. Consequently, the book has a familiar feel to it (at least to fans of HBW), though the clash of styles apparent when using the artwork of 25 different artists is sometimes too evident (see, for example, the plate of African Blue Tits Cyanistes teneriffae). The book contains a very brief introduction, a full coded checklist for each of the island groups, a fairly detailed bibliography and a species index. The remaining pages are taken up with the plates and the pages of text and distribution maps (laid out opposite the plates). The texts cover measurements, identification, voice, status/habitat, and (sometimes) taxonomy. These seem accurate and adequate for the purpose of this guide. Maps are not included for vagrants; instead, a list of islands where the species has occurred is given under status/habitat. A practical problem faced by books dealing with island groups that attract large numbers of vagrants is readily evident. This guide deals with 573 species, but only 144 of these breed. A further 51 species are winter visitors, 70 are passage migrants, and a whopping 291 occur only as vagrants. In other words, over half the species dealt with are vagrants that one is unlikely to encounter on a visit to any of these islands, with the possible exception of a visit to the Azores in autumn. There is no easy solution but it means that the resident (and often endemic) species, which are perhaps of most interest to visiting birders, are rather swallowed up among a mass of largely irrelevant species from elsewhere. I wonder whether it might have been better to divide the book into two halves, the first dealing with breeders, winter visitors and migrants, and the second with the vagrants (as in the well-liked Shell Guide to the Birds of Britain and Ireland - Michael Joseph, 1983). Of course, this is not the first field guide to this region. In 2006, Christopher Helm published the Field Guide to the Birds of the Atlantic Islands: Canary Islands, Madeira, Azores, Cape Verde, by Tony Clarke. A review of that title appeared in BB (Brit. Birds 100: 311) but inevitably some comparisons need to be made here. The earlier title is a larger book so less practical in the field, but contains a longer introduction, more detailed species texts (as well as relatively brief but extremely useful plate captions), many more details of the vagrant records, but lacked distribution maps. Birdwatchers visiting any of these islands should probably take both books and carry the new guide in the field, while keeping the earlier title for reference in the car or hotel. Rather curiously, the title under review makes almost no reference to Tony Clarke's field guide. The author is obviously aware of it (since he reviewed it in Ibis) and it seems disingenuous not to include it in the bibliography, nor any mention of Clarke and David Collin's book A Birdwatchers' Guide to the Canary Islands (published in 1996 and still in print). Clearly there is more to this than meets the eye! One final thing drew my attention. The guide includes the recently described Monteiro's Storm-petrel Oceanodroma monteiroi, a species recently split from Madeiran Storm-petrel O. castro. While the text explains that this is a cryptic species, best separable from Madeiran by voice and perhaps moult timing, I would question the wisdom of using the same illustrations for both species, simply flipped horizontally to try to make them look different. David Fisher Buy this book from theÂ British BirdsÂ bookshop which is run byÂ Subbuteo Natural History Books This means thatÂ 5% of all sales generated byÂ British BirdsÂ subscribers, whether it is books reviewed in the journal, featured on its book page or listed on the Subbuteo website, will be paid toÂ British BirdsÂ - and will directly support the production of the journal. To browse the British BirdsÂ bookshop, please clickÂ here
Volume:
Issue 10