History of Ornithology in Malta 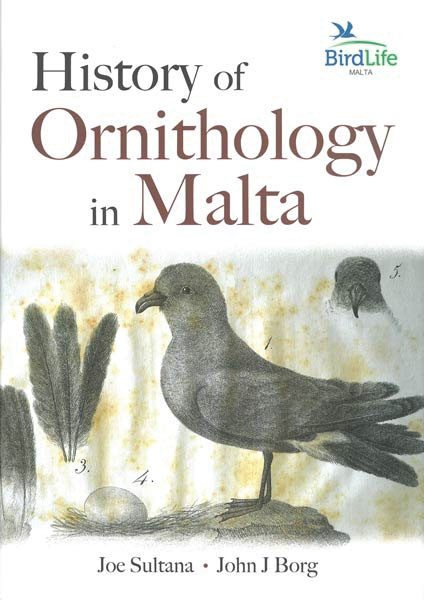 By Joe Sultana and John J. Borg BirdLife Malta, 2015 Hbk, 390pp; many colour illustrations ISBN 978-99957-818-6-6 RRP â¬49.99 This book is written by two of Maltaâs best-known ornithologists: Joe Sultana, who has been at the forefront of the battle between birders and hunters for nearly 50 years, and John Borg, an ecologist who has published many papers on breeding seabirds in particular. For 25 years they have collected papers and other material to document the islandâs links to ornithology. This book is the result of that effort. This island of just 316 km2, with a population of less than half a million people, is full of history. Going back to at least 3,000 bc, the earliest suggestion that the Maltese were aware of birds is a pottery fragment showing a crested species (perhaps a Hoopoe Upupa epops or Northern Lapwing Vanellus vanellus). There are other examples of birds depicted over many centuries by the Christian Church. Falconry was already popular in the thirteenth century, and by the eighteenth century hunting birds had become a significant source of food for some. The links with hunting remain strong today, but now those who shoot or trap birds do so more for reasons of âsportâ â or the continuation of what they see as a Maltese custom. What this book shows is that the study of ornithology in Malta really dates back to 1843 when Antonio Schembri wrote the first checklist of the countryâs birds. Others to have made an impact in those early days include Charles Wright, a âshotgun ornithologistâ who published a paper in The Ibis in 1864. There were a number of other nineteenth-century publications and, while these often listed the birds recorded, they also began to recognise the importance of Malta and Gozo as stopover locations for migrant birds. Apart from casual observations, there were also attempts to make regular surveys of migrant birds attracted to three lighthouses. The links between Malta and the British military account for much of the interest through the twentieth century as a number of servicemen were also keen ornithologists. In 1976 David Bannerman and Joseph Vella-Gaffiero summarised everything known up to that date in Birds of the Maltese Archipelago, although in many ways this was less authoritative than A Guide to the Birds of Malta by Joe Sultana, Charles Gauchi and Mark Beaman published a year earlier. (The latter book was heavily revised in 1982.) This new book charts the stories behind the work of these ornithologists, with behind-the-scenes stories of intrigue, debate and a fair bit of rivalry. Photographs of original notes, diaries and correspondence are all included â for example the reaction of David Bannerman to a rather unflattering review of his book in The Ibis! The story is brought right up to date with an account of how the Malta Ornithological Society was founded in 1962 and raised the profile of bird conservation while campaigning against hunting. In 1992 this became BirdLife Malta â with 3,000 members today. This is not the first book to document much of this history â Natalino Fenech covered some of the same ground in 2010 in A Complete Guide to the Birds of Malta (Brit. Birds 104: 101â102) â but this new book brings together a lot of information in one place in an attractive and readable style. Keith Betton
Volume:
Issue 5