Naming Nature: the clash between instinct and science, by Carol Kaesuk Yoon 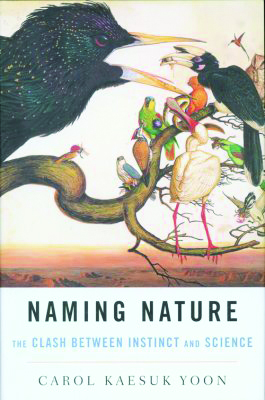 W. W. Norton, New York, 2009; pbk, 341pp, black-and-white illustrations ISBN 978-0-393-33871-3; Subbuteo code M20619 £12.99 Carol Yoon describes the scientific developments in taxonomy, from the pioneering work of Linnaeus, moving on to the impact that evolutionary theory had on the subject, through post-war numerical taxonomy, the impact of molecular techniques and the modern application of cladistists to systematic practices. The central argument of the book is that taxonomic advance has dissociated people from their intuitive (or primitive) understanding of the world around them. The point is made that Linnaeus's binomial system of classification is in tune with our sensory and philosophical perception of the world, or umwelt, and the subsequent developments in taxonomy produced classifications that are in conflict with our instincts. The book paints taxonomists, living and dead, as a bunch of insufferable polemics with a perfect storm of personality disorders, and in general does the science a disservice. The author presents her opinions as facts, and the informal, but highly critical accounts of the apparent inability of each generation of taxonomists to take on board new techniques and lines of enquiry is unfair on those people who are no longer around to defend themselves. It is probably true to say that many modern city dwellers have become disconnected from the natural world. However, the implication that taxonomic progress underlies the biodiversity crisis, that people cannot cope with clades and that everything would be OK if we just accepted that whales are fish pushes the boundaries of credulity. It undermines the good points made elsewhere in the book. Of the 300 pages of main text, about 90% of them are padding. If I hear the word 'umwelt' again (ever) or hear another lament about the paraphyletic status of those animals we call 'fish' (both are recurring themes in the text), I'm going to scream. When the author submitted a synopsis or proposal for this book to the publisher, it must have sounded like a fascinating, seminal work, and it would have made a thought-provoking BB paper. Trouble is, there is little in there that could not have been said in 4,000 words. That is not to say the book does not have value: there is a real issue, for example, when delineation of new cryptic species (e.g. seabird splits) makes field identification of some birds nigh impossible. Does this detract from observers' connection with the birds they observe? It is a question that needs an airing and I would hope that this interesting book will be widely read. Martin Collinson Buy this book from theÂ British BirdsÂ bookshop which is run byÂ Subbuteo Natural History Books

This means thatÂ 5% of all sales generated byÂ British BirdsÂ subscribers, whether it is books reviewed in the journal, featured on its book page or listed on the Subbuteo website, will be paid toÂ British BirdsÂ - and will directly support the production of the journal. To browse the British BirdsÂ bookshop, please clickÂ here
Volume:
Issue 1
Next Article >