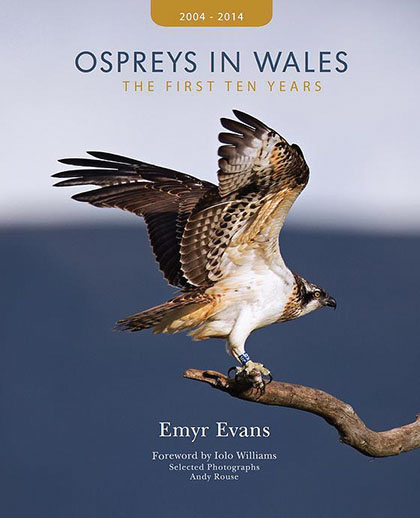 By Emyr Evans Published by the author, 2014; hbk, 248 pages; many colour photographs ISBN 978-0-9930990-0-7, Â£30.00 The remarkable story of the return of Ospreys to breed in Wales has been brought together in this large-format book, beautifully illustrated with some superb photography. The author has been intimately involved with this epic story - one of joy and sadness, of ecstasy and despair, but ultimately of endurance, persistence and hope. Although Ospreys must have passed through Wales on migration in centuries past, surprisingly there are no historical records of nesting, save for a reference from 1604 to 'fishey hawkes' breeding along the banks of the Dyfi. The Mabinogian tale of 'The Eagle of Gwernabwy' probably refers to an Osprey. The coat of arms of Swansea granted in 1316 features an Osprey, while there are at least ten names in Welsh that refer to Ospreys. Neither must one forget The Ospreys - Y Gweilch - one of the four professional rugby union teams from Wales. Indeed, Iolo Williams in his foreword compares seeing ones first Osprey as like Wales winning a rugby Grand Slam. Having first nested in Wales in 2004, now there are at least two pairs of Ospreys nesting in both Meirionnydd and Montgomery. Increasing numbers pass through elsewhere on migration, sometimes even linger a while, so surely it cannot be too long before other Welsh counties are colonised. David Saunders
Volume:
Issue 5