Having made a recent, supposedly one-off, foray into the business of optical reviews, I felt I could hardly say no when the nice people at ZEISS wanted to send me their new telescope, the Gavia 85, to look at: 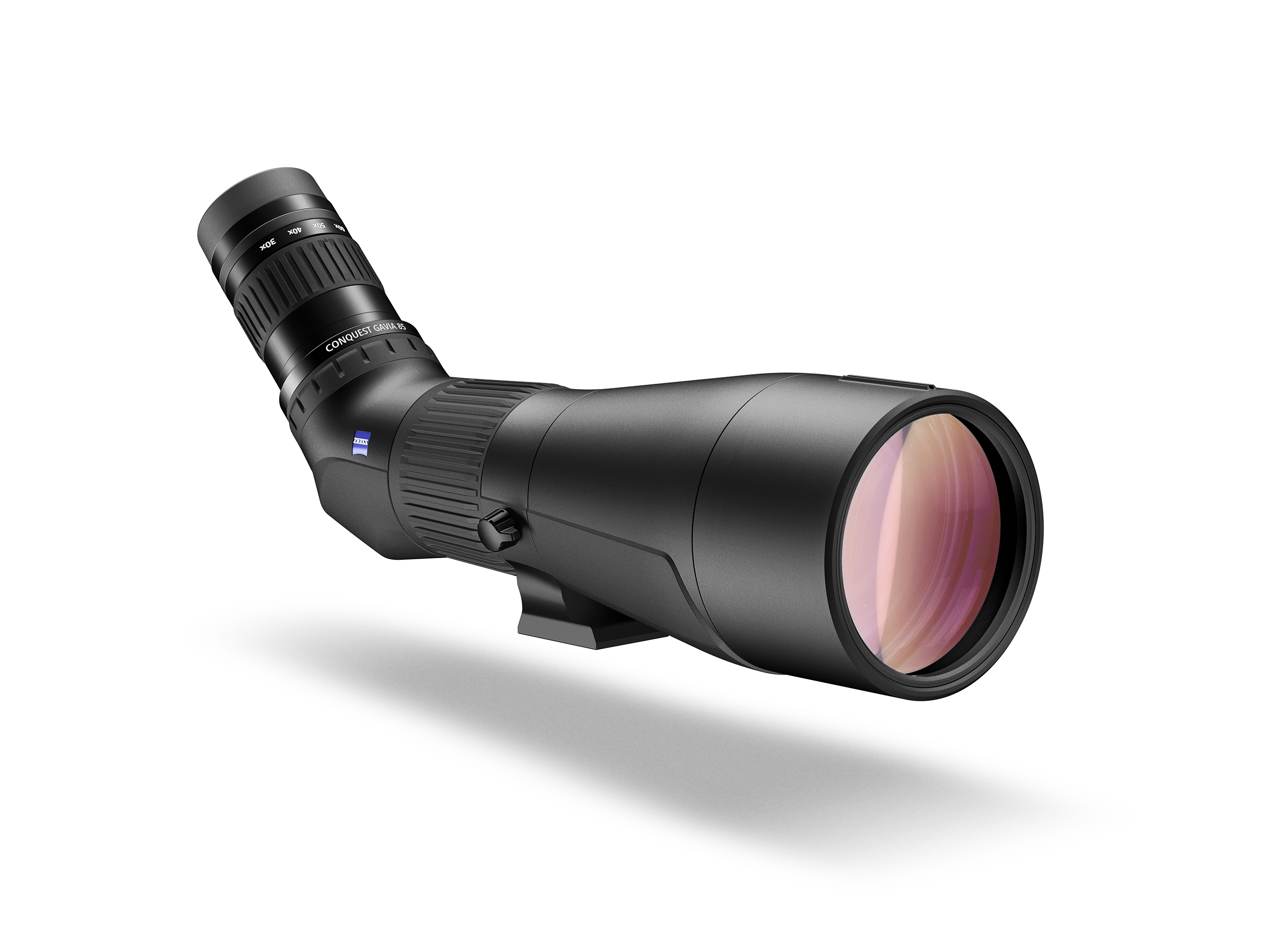 And so, a few days before Christmas, another large box appeared in the porch. Our two-year-old granddaughter was with us, and her eyes lit up. Clearly, Santa had come early. âGrampa! We can share this!â Mmmm, well, yes, perhapsâ¦ The quantity of polystyrene chips involved was the first highlight, in fact Iâm still fishing the odd one out from the back of the sofa. And, once the now-familiar white box was revealed, she was also impressed by its magnetic flap and the splendid image of Gavia arctica inside. When the box revealed a somewhat less-than-glitzy black telescope, with few moving parts and no lego, her interest began to wane, and when Grampa got his tripod out she went back to Hey Duggee, disappointed. 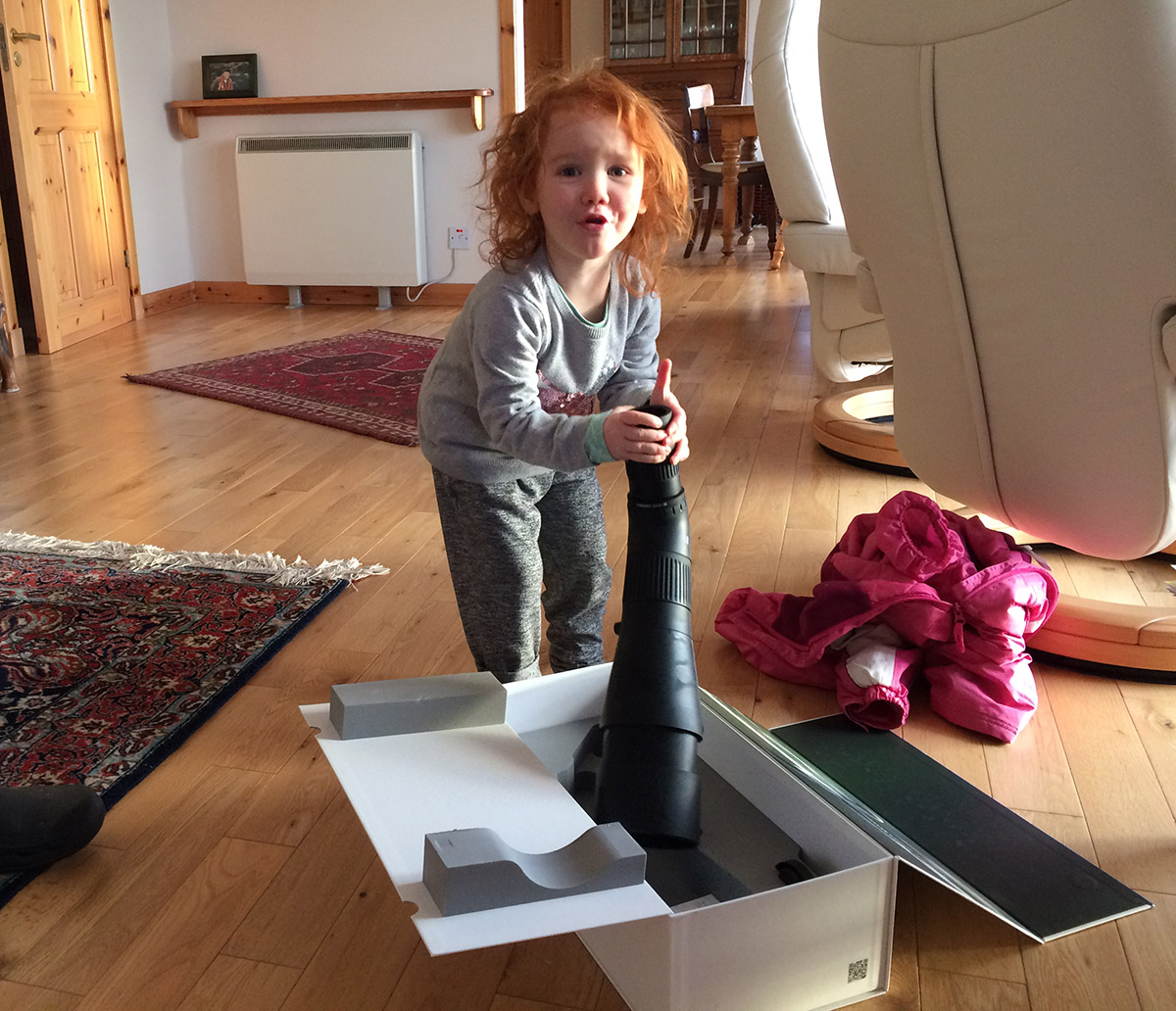 The excitement of first opening the box...
Earlier in the autumn, I had thoroughly enjoyed an extended trial of the flagship binocular in the ZEISS range, the SF 8x42. Having had a long history of using ZEISS binoculars, I was genuinely intrigued to see what the latest product from the ZEISS factory looked like. In contrast, I have to confess that I have no history whatsoever of using a ZEISS telescope. Fellow Shetland birder Paul Harvey had one of the early ZEISS Diascopes, and I have looked at a few birds through his âscope, but other than that â nothing. My childhood birding was telescope-free, and the arrival of a gleaming Bushnell Spacemaster (22 x 60), an 18th birthday present, was a major landmark. That scope was a trusted companion until some lowlife nicked it from a hire car in the centre of Seville in 1989. The Spacemasterâs replacement, courtesy of Mum & Dadâs house insurance policy, was a Kowa TSN-1, which also became much loved, well travelled and embalmed in black electrical tape. And from that point my birding scope has been either a Kowa or a Swarovski. Currently, I have three scopes. Baby bear, the genuinely lightweight option, is a 15-year-old Kowa TS611with a 20x WA eyepiece, which lives in my camera bag so that Iâve always got something when Iâm out on foot. I can prop it on a fence-post, or a stone dyke, or at a push lie flat on the ground with it. Mummy bear, the all-rounder of the three, is my 12-year-old Swarovski AT 65HD (20â60x zoom), the preferred option for travelling. And daddy bear (yes, grand-daughter no. 1 is now helping me with the review as well), is a Swarovski ATX 95 (30â70x zoom), which is optically awesome but sufficiently heavy that I tend not to carry it too far; itâs used primarily on a beanbag on the van window, on a tripod for seawatching or on a twitch where I know how far Iâll have to carry it. Admittedly, three scopes is surely overkill, and I didnât set out to have a âscope rackâ; but each of them has its place and Iâve so far been unwilling to trade any of then in. How would the new ZEISS Gavia 85 fit in? First impressions were good. The scope is a neat, sleek and reasonably compact piece of engineering, which feels comfortable and balanced in your hands (and on a beanbag). The black rubber armouring is smooth, and firm to the touch, like the SF binoculars, and I liked it. The focusing is via a helical focussing ring, with broad ribbing on the wheel, and the zoom control is similar, and located on the eyepiece. Most noticeably, especially compared with my big Swaro ATX, the new scope felt impressively light. (The ZEISS weighs around 1700g, the big Swarovski around 2200g, according to the manufacturersâ figures.) Relatively lightweight, yet with an 85 mm objective, this seemed to point to a genuine all-rounder. Would it deliver in the field? The weather in Shetland during the test period was generally awful, gales and storms alternating with days when it barely seemed to get light. Although not uplifting for residents, it was actually not bad for putting a telescope through its paces. I used it mainly from the van, in fact after the first day I never actually fixed it onto a tripod, but I did manage to compare it with the other models in my armoury. And â at the end of the test period, I was pretty impressed. Not totally bowled over, but still impressed. Optically, I thought the new Gavia was top drawer. The image was bright, and sharp, throughout the zoom range. The ED glass at the objective end of the scope works very well indeed. Thereâs a wide field of view (33m at 1000m through 30x, which is just a shade less than my Swarowski ATX), and the image is pretty much sharp from edge to edge. The colour rendition was excellent, neutral and pleasing to this reviewerâs eye. On 27th December, in the wake of Storm Barbara on Christmas Eve and Storm Conor on Boxing Day, I was out for a few hours, keen to see whether there might by something storm driven sheltering in the south end of Shetland. Predictably, a proper, headline, transatlantic vagrant was too much to ask for, but the birding highlight of the day was a distant group of White-fronted Geese â very distant through bins but through a scope, they resolved, gradually, and interestingly, into two separate family parties, an adult and three juv Greenlands, and an adult and five juv Europeans. Everyone knows that Greenlanders have orange bills and Europeans have pink bills â but in reality, in the field on a dull winterâs day, that difference can often be remarkably subtle. The ZEISS scope passed that test with (pardon the pun) flying colours, and in fact itâs perhaps the one moment Iâll remember most from my time with the Gavia. The geese gave other clues, of course, not least the darker sooty-grey of the Greenlanderâs plumage compared with the paler grey Europeans â but the colour differences between the two groups were perfectly apparent through the ZEISS scope. 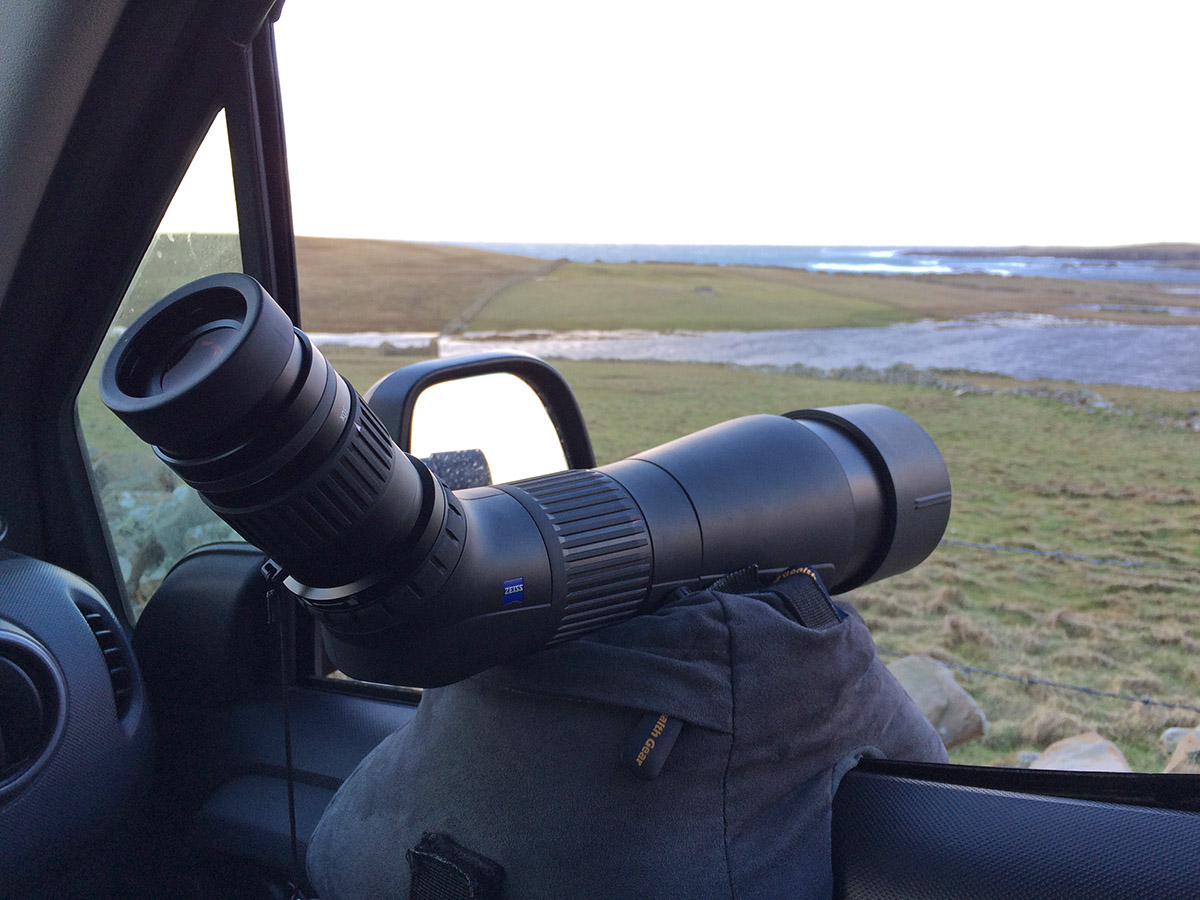 The Gavia in action in Shetland
So much for what I liked. Unlike the binoculars, which I really struggled to find fault with, there were a few niggles with the scope. Most irritating is that the direction of focus is back to front â most scopes (all of mine, and most binoculars, including my ZEISS) focus clockwise to infinity. The Gavia is the opposite. Itâs a bit like getting into a hire car where the wipers and the indicators are on the opposite side of the steering wheel to your own car, and as you come up to a roundabout you keep switching the windscreen wipers on. Itâs not a major issue, and you would get used to it soon enough, but itâs a detail that hasnât been thought through. Also, having praised the binoculars for their fast focus, which I liked a lot, I have to confess that, to me, the focus was slightly too fast on the scope. Especially since I used it mainly with thick gloves, it was all too easy to go beyond the sweet spot â it was partly the gloves, and partly the unfamiliar focus direction â but still I much prefer the slower focus of the Swarovski. Especially when digiscoping, fine focus control is essential (given the light conditions during the test period I didnât try any digiscoping but I could imagine what it would be like) and for me the ZEISS wouldnât score 10/10 on focussing. The one other thing I wasnât so impressed with was the zoom range. I certainly missed the ability to continue on up to 70x that I have with my big Swarovski. The ZEISS is perfectly useable up to 60x, even in pretty poor light, so why not give it the chance to go further? Continuing with the car analogy, it feels like a lovely big engine married to a five-speed rather than six-speed gearbox. In the same way (and I have the same complaint with my 30â70x Swarovski) there are times when I miss the 20X option, which is really useful in many birding situations, either in low light conditions or scanning a wide area such as an estuary or a big loch. Admittedly, I spent many years with a fixed 30X WA on my old Kowa TSN-1, and never wanted for anything else â but in the many years of using a 20â60x Swarovski as my main scope, I came to love the 20x option. So: to be 10x short of what I regard as the optimum at both ends of the range was a mite disappointing. None of the above would necessarily put me off this scope. With time, you would get used to all three of the issues Iâve written about, although it remains to be seen how good this scope is for digiscoping. And what impressed me most about the new Gavia (and maybe this sounds like faint praise, although itâs really not meant to be) is that this scope is a genuinely good all-rounder. Given that I have three scopes, for slightly different purposes, I wouldnât readily contemplate selling them all for this one. But if I was starting from scratch and my budget ran to just one scope, this would be a really strong contender. Optically, I think itâs great, and itâs light enough to be portable. If ZEISS can fix one or two of the handling issues mentioned above, it would be even better. Most significantly, itâs very keenly priced, and it seems to me that value for money is arguably among its biggest attributes. This scope is part of the Conquest range, meaning that itâs a middle-range rather than top-range item. I can honestly say that it didnât feel that way; in terms of optical quality and build quality it felt a genuinely classy item. Itâs nitrogen-filled, itâs watertight, it has ED glass â what more do you want? Whether it looks as good after 12 years as my little swaro ATHD is quite another matter but I canât judge that. At around Â£1400 from retailers, Iâd say that Â£ for Â£ the Gavia is worth very careful consideration if youâre in the market for a scope for all seasons.
Volume:
Issue 1