Return to One Man's Island, by Keith Brockie 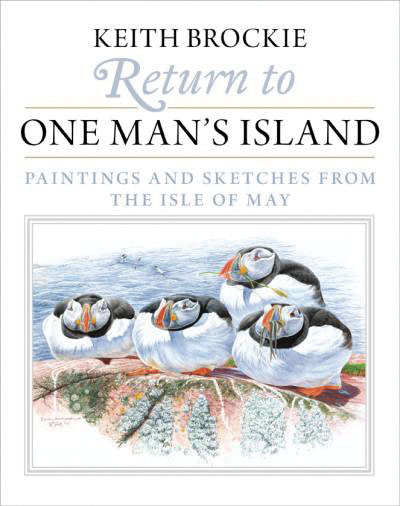 Birlinn, 2012; hbk, 175 pp; colour throughout; ISBN 978-184158-974-9 Subbuteo code M21591, £25.00 As a young artist Keith Brockie discovered the Isle of May, an island that has drawn him back many times to study its wildlife. His early career saw the production of 'One Man's Island', a collection of field sketches made on the May. It was his second book and was published by HarperCollins in 1984. This book describes Keith's return to the island, when he spent most of the 2010 season sketching in the field. The result is a book of 175 pages crammed with wildlife art - birds, mammals, crustaceans and insects. Pretty much all the work has been achieved in the field, typically (for the vertebrates) from a distance through a telescope focused either on a tight focal point worked up in great detail - maybe as tight as a Fulmar's Fulmarus glacialis bill, the arrangement of a Razorbill Alca torda chick being brooded under an adult's wing - or a wider study subject, such as a small group of birds. For those unfamiliar with his work, just imagine leafing through a large field sketchbook, the target intricately worked up in pencil and watercolour, the peripherals typically hinted at - but sometimes fascinating the artist sufficiently for him to describe them in more detail, and relatively few words. The breeding seabirds have much to offer the artist; they are perfect, static subjects, with endless possibilities in terms of lighting and posture. However, for me, it was the mammals that had the greatest wow factor, and I particularly enjoyed the rabbits and seals. Later chapters describe in pictures the excitement of the isolated bird observatory (lamentably ignored by many modern, info-drenched birders), witnessing migration actually happening minute by minute and the ultimate thrill of a White's Thrush Zoothera dauma in the hand. So this book is about two of my favourite things: beautifully observed field sketches and a remote island (preferably, as here, a bird-observatory island). As a ringer and an artist, I was pretty well disposed to this book before I opened it, and I was certainly not disappointed. Mention should be made of the high-quality production and reasonable price - the publisher should be congratulated. Keith Brockie has been well established as a wildlife artist for some time; for those already acquainted with his work, this book delivers everything one might hope for and is likely to prove very popular, but it should also enthral those new to his work. I hope that it also encourages more people to visit bird observatories; like Keith, they will find them magical places. Alan Harris Buy this book from theÂ British BirdsÂ bookshop which is run byÂ Subbuteo Natural History Books This means thatÂ 5% of all sales generated byÂ British BirdsÂ subscribers, whether it is books reviewed in the journal, featured on its book page or listed on the Subbuteo website, will be paid toÂ British BirdsÂ - and will directly support the production of the journal.
Volume:
Issue 2