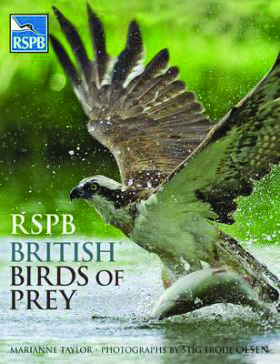 A&C Black, 2010; hbk, 224pp, many colour photographs; ISBN 978-1-4081-2849-7; Subbuteo code M20780; £24.99 First and foremost, this large-format volume is a superb collection of colour photographs of Britain's birds of prey and owls, concentrating mainly on our regularly occurring species. The majority of the pictures were taken by the same photographer, Stig Frode Olsen, which is a considerable achievement, even though many were no doubt taken outside Britain. I also wondered whether one or two may have involved captive birds. The very brief and basic captions do not provide this information, or any other details about location and time of year. The text accompanying the pictures provides a readable and informative overview of bird-of-prey ecology and conservation, covering each species in turn after a brief introductory chapter. It is clearly aimed at a broad, rather than specialist, audience but covers the ground well and provides enough detail to be useful to more serious raptor enthusiasts, at least for the species with which they are less familiar. The RSPB's involvement has ensured that there is a particular focus on conservation issues and the threats that Britain's birds of prey still face, despite the encouraging increases in many raptor populations over recent decades. The RSPB's influence is also apparent in the short, but very carefully worded, account for the Eagle Owl Bubo bubo and in sections covering other contentious raptor issues such as the continued illegal persecution of Hen Harriers Circus cyaneus on upland shooting estates. All in all this is an excellent book and is highly recommended for those wishing to gain a better understanding of this popular group of birds in Britain. Ian Carter Buy this book from theÂ British BirdsÂ bookshop which is run byÂ Subbuteo Natural History Books This means thatÂ 5% of all sales generated byÂ British BirdsÂ subscribers, whether it is books reviewed in the journal, featured on its book page or listed on the Subbuteo website, will be paid toÂ British BirdsÂ - and will directly support the production of the journal. To browse the British BirdsÂ bookshop, please clickÂ here
Volume:
Issue 5