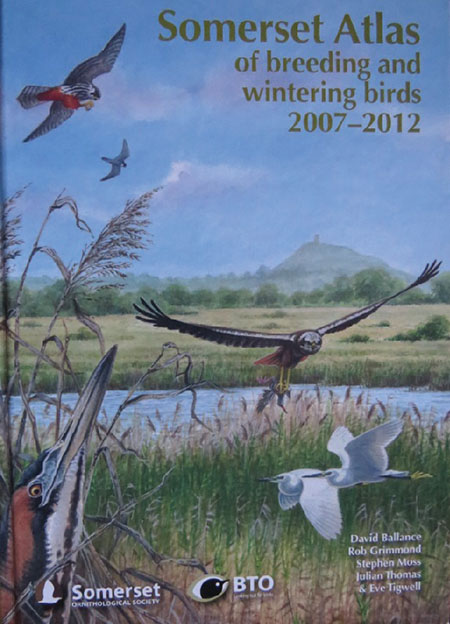 By David Ballance, Rob Grimmond, Stephen Moss, Julian Thomas and Eve Tigwell Somerset Ornithological Society, 2014; hbk, 336pp; photographs, maps and tables ISBN 978-0-9931205-0-3, Â£35.00 Another county to complete its own bird atlas on the back of the national BTO/BirdWatch Ireland/SOC project is Somerset. This one is an attractive and well-presented hardback in a compact size - the same size as BB - so it is comfortable to read. The book has been published by the local bird club (Somerset Ornithological Society), and also carries the BTO logo on the cover. Somerset is a varied county with the uplands of Exmoor and other hills in the west and southwest where it borders Devon, and the Mendips in the northeast along the Avon border. It has a long, north-facing coastline (about 70 km) along the Bristol Channel and, of course, the extensive marshes of the Somerset Levels, fast becoming one of the prime marshland areas for birds in Britain. The cover depicts the marshes (with Eurasian Bittern Botaurus stellaris, Little Egret Egretta garzetta, Marsh Harrier Circus aeruginosus and Hobby Falco subbuteo) on the front and an oak wood and moorland scene on the back (with Common Buzzard Buteo buteo, Wood Warbler Phylloscopus sibilatrix, Pied Flycatcher Ficedula hypoleuca and Common Redstart Phoenicurus phoenicurus). Inside there are 36 pages of introduction before the main species accounts. A major section in this introduction is a guide to the county and its birds. With 14 colour photographs and three maps (showing topography, hydrology and human geography) this is an excellent chapter, guiding the reader through the different habitats and bird communities of the county. Picking out example species of each area helps readers less familiar with Somerset to feel closer to the ornithology of the county and I suspect many local readers will learn much from this section too. The project to map the birds of the county ran in tandem with that of the nationwide Atlas for four years, with an additional winter and breeding season at the end. The area covered was the current county and bird recording area of Somerset, for which there are 973 tetrads. All of these were surveyed, except for 26 on the border with neighbouring counties and where the land within Somerset occupies less than a quarter of the land area. The maps are simple, with no depiction of altitudes or physical features. The breeding-season maps use different coloured red-toned circles representing levels of breeding evidence by tetrad, and a '+' to denote presence in the breeding season where there was no further evidence. Presence in winter is denoted by a blue circle, but there is no differentiation to show the numbers of birds recorded. The county is conveniently shaped so that two maps can be shown on one page and these all appear on the right-hand side of the opened book. Because this is the first atlas for Somerset, there are no change maps. The text can therefore concentrate on describing local distribution at a tetrad level, which is done to a varying extent, but with nothing on the map to relate distribution to physical features, the reader is left to decipher much of the distribution by reference to the introductory chapters. Some of the texts are very brief, with quite a lot of white space or space taken up with black-and-white illustrations of some species. These vignettes give a nice feel to the book but I would like to have had more to read so that I could better understand the local habitat associations behind the distributions. So, for Common Whitethroat Sylvia communis, the different levels of tetrad occupation across the county are remarked upon, but is there any common factor which might explain the gaps in the lowlands? Why are there fewer tetrads occupied by Stock Doves Columba oenas in the north of Somerset? The map for Yellowhammer Emberiza citrinella is one of the more striking and the absence from urban areas, Exmoor and the Levels is explained. Is there some underlying link between the occupied areas with land use and altitude, as has been demonstrated elsewhere? Again, what about the gaps? Somerset has an avifauna, Birds of Somerset, but there will have been many changes since its publication in 1988. With the benefit of the new distribution maps, perhaps more could have been said to update that work. There are no statistics in this atlas to indicate the number of occupied tetrads by species, an easy yardstick by which future comparisons could be made. And, despite the hard work of fieldworkers counting all birds as part of the Timed Tetrad Visits, there seems not to have been any use of this information in giving measures of abundance across the county or maximum totals recorded. All in all, the authors should be proud that they have produced a book showing the distributions of all species in the county, by which future changes can be compared. I feel, however, that an opportunity to bring the maps to life has not altogether been achieved. I would certainly recommend this book to anyone who knows Somerset, but other county groups writing bird atlases will learn little from it. Mark Holling
Volume:
Issue 5