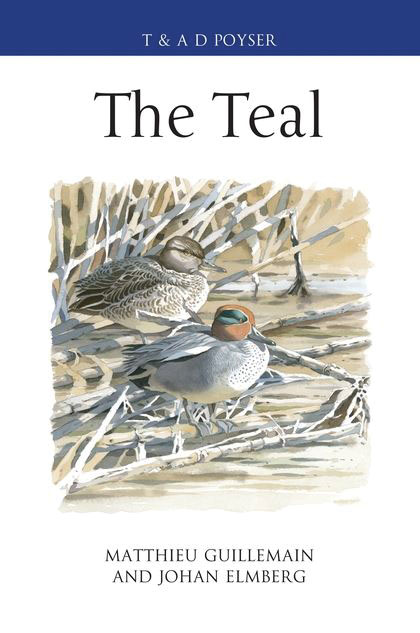 By Matthieu Guillemain and Johan Elmberg Poyser, 2014; hbk, 320pp; colour and monochrome photos, line-drawings, many charts ISBN 978-1-4729-0850-6, Â£50.00 Looking back across my collection of Poyser monographs, some authors have approached their subject from lifelong personal field observation, while others have created a very thorough shakedown of research carried out by many people. This book is in the latter camp. That comment is not intended as a snub: Matthieu Guillemain is a Research Fellow at Tour du Valat, in the Camargue in France, while Johan Elmberg is Professor of Animal Ecology at Kristianstad University in Sweden, and there are perhaps few people who have their level of experience in assessing the population and ecology of waterfowl. The approach that they take is therefore primarily academic as they summarise all that is known about 'the Teal'. Despite the book's title, it is in fact about two taxa: the Eurasian Teal Anas crecca and the North American Green-winged Teal A. carolinensis, here treated as races of a single species, the Common Teal (a position also adopted by the American Ornithologists' Union and the Howard & Moore checklist). However, most European records panels now split the Common Teal, as do the IOC and Clements checklists. What becomes clear as you read the text is that, apart from fairly minor plumage and size differences, these two forms appear to share identical lifestyles. Indeed, the authors summarise recent evidence presented by Jeffrey Peters and others who claim that gene flow between the two forms continues, thus preventing them becoming separate species. The book covers all the key areas that you would expect - distribution, population trends, foraging ecology, breeding behaviour and population dynamics. Throughout their range they are a major target for hunters, and sections discuss management and conservation too. Although these are common species, I was struck by the challenges faced in their relatively short lives, on both the breeding and the wintering grounds. Living in the UK, it is easy to think of them as resident, but our situation is unusual because throughout much of their range they are primarily or completely migratory. This is particularly the case for North American birds as they are able to travel much farther south than their Eurasian counterparts, which are restricted by habitat limitations in Europe, North Africa and Asia. Although Poyser monographs are always highly factual, some authors have weaved their facts into a very readable text. This book is somewhat clinical in comparison, and given the background of the two authors that is what you might expect. Each chapter is full of facts about wildfowl ecology, showing how the Teals compare with others within the family. In fact, this book provides a wealth of information about wildfowl in general, and at times I felt that this rather overshadowed the data on the Eurasian and Green-winged Teal themselves. A series of appendices covering almost 100 pages provides a great level of detail on population numbers by country, key wintering sites and a detailed list of food items (the latter covering 23 pages!). There is also a summary table of 42 Avian Influenza Virus strains that have been found in either species, plus a long list of parasites and ectoparasites that they play host to. The book concludes with a bibliography of around 800 papers and publications. Keith Betton
Volume:
Issue 5