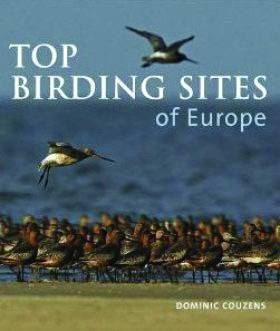 New Holland, 2011; hbk, 192pp, CD with vocalisations of 60 species; ISBN 978-1-84773-767-0; Subbuteo code M20836; £22.99 Following on from his 2008 title Top 100 Birding Sites of the World, Dominic Couzens has now produced a volume focused specifically on Europe. It covers 30 sites that he has chosen to represent the best birding locations on the continent, ranging from the Azores to Svalbard (Spitzbergen) to the Kalmykian Steppes on the western shores of the Caspian Sea. The selection is inevitably arbitrary and includes well-known sites such as the Coto DoÃÂ±ana, the Camargue and Falsterbo, as well as less famous locations (to me at least) such as Organbidexka Col Libre, Pripyat River and Matsalu Bay. If you are unsure of where those last three sites are, then perhaps that is a good reason to buy this book! Each site is covered by a chapter that starts with a highlight box briefly covering habitat, key species and time of year. Then follows a well-written account of the site that describes the main features, some historical or geographical background and then detailed information about the birds likely to be of most interest to the visiting birder. This is not a site guide - it doesn't include large-scale site maps or detailed directions - but rather a book written to inspire people to visit the various sites by describing their ornithological attractions in general terms. The chapters are illustrated by beautiful and evocative colour photographs portraying the highlight birds as well as typical habitat and scenery. The author has clearly done a lot of research and gives specific and up-to-date information about bird populations, etc. For example, in Extramadura 6,500 Great Bustards Otis tarda were counted in 2008 and in the Biebrza River basin there are 2,000 singing male Corn Crakes Crex crex. And I had no idea that the Polar Bear Ursus maritimus population on Svalbard outnumbers the human one (3,500 vs. 2,800). He also includes unusual or poorly known ecological snippets about various species, which for me certainly added interest to the text. Included with the book is a CD containing top-quality recordings of the vocalisations of 60 species - two for each site. To be honest, I think that this is a bit of a novelty and I'm not sure quite what purpose the average reader will have for it, given that the species included are a mixture of the poorly known (White-backed Woodpecker Dendrocopos leucotos, Paddyfield Warbler Acrocephalus agricola) and the very well known (Northern Lapwing Vanellus vanellus and Blackcap Sylvia atricapilla). As already mentioned, the book contains many splendid photographs, but I did spot a couple that seem to be erroneous. The photo captioned White-rumped Swift Apus caffer in the Strait of Gibraltar chapter doesn't look like one to me, being brown and with a very broad white rump band. But it doesn't look like a Little Swift A. affinis either, and it would be interesting to know where it was taken (the credits list neither location nor photographer - only a photographic agency). And while the text for Extremadura mentions that the Iberian Azure-winged Magpie Cyanopica cyanus is now split from the Far Eastern form, the accompanying photo seems to be of the latter as the bird has obvious white tail tips, which the Iberian form lacks. One other minor criticism is that while the sites are ranked for 'quality', the rank appears only once, on the title page for each chapter (the sites are set out in roughly geographical order) and there is no list showing these ranks in order. Dominic's choice for top site is the Danube Delta, second is the Coto DoÃÂ±ana, but he seems to have two sites in third place, Lesvos and the Pripyat River (unless one of those is a typo?). So far I've been to 14 of the 30 sites covered - this book certainly makes me want to visit the other 16! It's a good general read and can be recommended to those looking for travel ideas and inspiration. David Fisher Buy this book from theÂ British BirdsÂ bookshop which is run byÂ Subbuteo Natural History Books This means thatÂ 5% of all sales generated byÂ British BirdsÂ subscribers, whether it is books reviewed in the journal, featured on its book page or listed on the Subbuteo website, will be paid toÂ British BirdsÂ - and will directly support the production of the journal. To browse the British BirdsÂ bookshop, please clickÂ here
Volume:
Issue 5