Where to Watch Birds in Ethiopia by Claire Spottiswoode, Merid Nega Gabremichael and Julian Francis 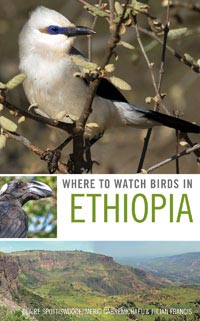 This guide is from the familiar Helm stable of Where to Watch Birds guides, which is now expanding beyond Britain and Europe to more far-flung destinations. The three authors all have impeccable pedigrees as experts on Ethiopian birding, including Ethiopia's foremost field birder, Merid Gabremichael. Their deep knowledge and, indeed, deep affection for the country is apparent on every page. And the level of detail is consequently superior to Birding Ethiopia. The Introduction contains more background to Ethiopia's habitats and their birds than the other book and Planning a Trip includes useful pointers on vehicle hire, food and books and maps. There are also contact numbers for hotels on the standard circuit. Both books stress that safety is an issue in outlying areas of Ethiopia. Approaching the Somali border in search of one more endemic is not necessarily a good idea. In the Aims and Scope of their book, the authors state: 'We have taken a pragmatic approach of largely concentrating on sites that are practical to visit in a relatively short visit to the country, and cover the majority of the region's most sought-after species.' Having said that, WWTB in Ethiopia contains twice as many site entries as Birding Ethiopia, which is achieved by subdividing the country into eight areas. The bulk of the book is taken up by the Top Fifty Sites, commencing in Addis and its surrounds (eight sites) followed by the North-Central Highlands (five), the Awash Region (six), the Central Rift Valley (eight), the Bale Mountains and Beyond (five), the Southern Lowlands (ten), the South-west (five) and the North (three). Each regional section opens with a list of localities and a map with the numbered localities pinpointed. Each locality then has its own detailed map with more numbering of particular landmarks. The authors also use GPS co-ordinates to assist further - but the co-ordinates are not on the requisite page, but clumped together in an appendix; I imagine this could prove rather frustrating in the field. Each site entry contains a description of the site, the key birds, access and what to find where as you bird the area. The text is broken up with numerous photos of the locations and speciality birds; helpfully, all birds mentioned in the text are highlighted in bold so scanning the page for the desired information is made easier. There are many stunning photographs, including the only known photo of Little Brown Bustard Eupodotis humilis, which lurks in far-eastern Ethiopia and Somalia. The Top Fifty Birds section is a photo gallery of Ethiopian endemics and other special birds such as Arabian Bustard Ardeotis arabs that make Ethiopia such a magnet for birders. (And yes, it does include the single wing of the roadkill Nechisar Nightjar that was recovered in 1990 - the only photographic evidence of this enigmatic species.) After the recent publication of the first field guide to the region (Birds of the Horn of Africa, Redman et al., Helm, 2009) and a regional atlas (The Birds of Ethiopia and Eritrea, Ash & Atkins, Helm, 2009), those wishing to visit Ethiopia are also now very well served with not one but two site guides. For a more detailed guide to the country's birding localities - including the tantalising prospect of new discoveries along the Sudanese border in the far south-west - then I would recommend Spottiswoode et al. But Behrens et al is arguably more user-friendly if you want a handy guide for your backpack. The ideal solution is to take both as they complement each other - and both books are packed with magnificent photos of the very special birds that make Ethiopia such a must-visit destination.

This means thatÂ 5% of all sales generated byÂ British BirdsÂ subscribers, whether it is books reviewed in the journal, featured on its book page or listed on the Subbuteo website, will be paid toÂ British BirdsÂ - and will directly support the production of the journal. To browse the British BirdsÂ bookshop, please clickÂ here.
Volume:
Issue 7