Atlas of Breeding Waders in the Russian Arctic, by Elena Lappo, Pavel Tomkovich and Evgeny Syroechkovskiy 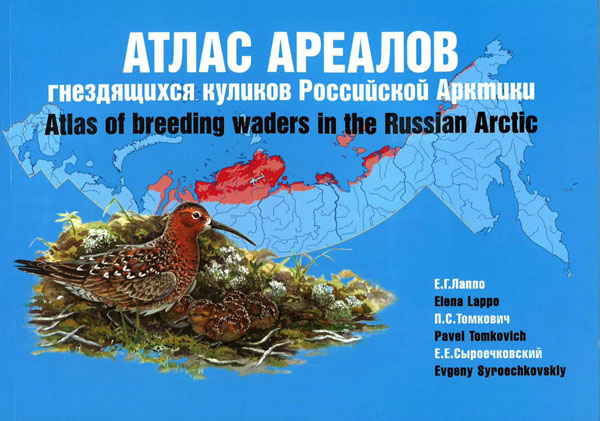 UF Ofsetnaya Pechat, Moscow, 2012; pbk, 448pp; 173 maps, black-and-white illustrations ISBN 5-86676-072-X, Price c. £35 plus p&p There is no other country with more breeding waders than Russia, where more than 70 species are recorded breeding regularly. The Russian Arctic is especially species-rich. Elena Lappo, Pavel Tomkovich and Evgeny Syroechkovskiy have been working in this remote region for many decades, primarily on the distribution and biology of Arctic waterbirds and waders in particular. I had the pleasure and privilege to participate in 12 summer expeditions to help search for breeding waders. Owing to the vision and long-term support of Gerard Boere and the Dutch Government, this atlas of breeding waders in the Russian Arctic has been completed, after almost 12 years in preparation. It incorporates the results of personal expeditions over the past 40 years (Pavel Tomkovich has been in the Russian Arctic almost every summer since 1972) but also data from field research from as early as the late nineteenth century. More than 1,360 publications have been used to describe the distribution, from over 2,800 locations. The atlas shows detailed distribution maps of 51 regularly breeding waders out of a total of 79 waders recorded in the Russian Arctic. For many species, new ranges are described. For example, the western distribution of the Great Knot Calidris tenuirostris, previously only known for Chukotka and Eastern Yakutia, is now marked to reach to the Yano-Indigirko region; the Northern Lapwing Vanellus vanellus is a newcomer in the European Arctic; the Wandering Tattler Tringa incana is a regular breeding wader in Southern Chukotka, not confined to Alaska; while the Long-billed Dowitcher Limnodromus scolopaceus now occupies a much greater range in Russia, as far west as the Taimyr Peninsula; and the Pectoral Sandpiper C. melanotos, also spreading originally from Alaska, is most likely now breeding in Europe. The seemingly discontinuous distribution of the Broad-billed Sandpiper C. falcinellus remains mysterious even after so many years of extensive field research, and shows that there are still gaps to be filled for this and other species. Three maps and a detailed text accompany each species chapter. One map shows all records, a second (for almost all species) shows breeding density and finally an extrapolated map combines the first two with background GIS information on vegetation, topography and habitats. Tables list locations with varying breeding density for those species with data available. Black-and-white sketches by Evgeny Koblik enhance the book's visual appeal. The level of detail surpasses anything produced from this region or anywhere else in the Arctic for that matter. A chapter at the end of the book attempts to interpret the dynamics of species range and population size. It is fascinating to see which species have changed and spread and which have declined, but in my opinion the data are not sufficient to allow some of the interpretations made. In particular, the overall positive population trends do not fully reflect the generally declining population trends observed in many Arctic wader species. This has also been recognised by the authors but is not clearly spelled out in the text and tables and could lead to the sadly incorrect assumption that Arctic species in general are doing well. This book is a monumental effort. Inevitably, in such a massive work, there are a few errors. A few names are spelt incorrectly, some references are listed twice and in the caption of the Sharp-tailed Sandpiper C. acuminata on p. 292 the authors could not decide between this species and the Purple Sandpiper C. maritima. But these are all minor quibbles considering the vast amount of information that has been included. With so many sources and references, some locations seem to have been lost and most certainly this atlas will trigger some additional information from readers to further advance our knowledge in this remote region. This atlas is a fantastic product and deserves a wide distribution among the English-speaking birding community. Although the text is in Russian, all 173 maps and tables have English titles and captions and each species chapter contains an extensive English summary. Unfortunately, the atlas is still not available in bookshops and those interested can order a copy directly from Elena Lappo at [email protected] Christoph ZÃ¶ckler
Volume:
Issue 7