If I had to summarise my life in just two words, they would have to be ‘birds’ and ‘binos’. Since I was a child I have had a keen interest in nature. I was raised in a Catholic family, and we were expected to confess all sins to a priest on a regular basis. I never understood the ‘natural’ sense in this and worked hard to avoid confessions during the year… except at Christmas. Then, my father insisted I go to confession, because otherwise Santa would avoid the house and deliver all the big boxes to the neighbours instead. I understood this message very quickly and it also taught me the importance of a ‘deal’.

I remember going to church one day in the middle of December, dreaming of the big boxes under the Christmas tree. Entering the church grounds, I heard a wonderful, jingling sound; Christmas music was coming from the bushes right beside me. I saw beautifully shaped and beautifully coloured birds, in between the red berries. The birds were not shy and I approached within metres: they simply blew me away. Later, I discovered that they were Waxwings Bombycilla garrulus. I didn’t go into the church but spent almost an hour with these magical birds before I went home to confirm to my father that confession was successful. It was not really a lie because, ultimately, I committed myself to nature in that moment, and discovered at the same time what a good strategy behind a ‘deal’ can do for you (I found the boxes under the Christmas tree despite all the Waxwings).

That Waxwing experience was so thrilling that I asked my father to buy me a pair of decent binos, and I received a pair of 8 x 30 Japanese porros. They didn’t last more than a year before the glued optics of those times came apart and Santa had to deliver a new pair. Eventually, I got fed up with the consistent lack of quality. I had tried a pair of 10 x 40 Zeiss Dialyts by then and was mesmerised by them. Yet even though I had successfully turned confession into an hour of birdwatching, there was no chance of asking Santa to deliver the best but most expensive binoculars in the world. Instead, I spent all six weeks of my summer holidays working in a factory. There, I had to overcome the next key challenge of my life, after successfully sorting the business of confession. My job was to produce safety switches, my colleagues were 35 mature German ladies and my working day involved enduring many jokes of a kind I had never experienced before (or since, not even in the military). It certainly toughened me up… and the end result was a brand-new pair of 10 x 40 Dialyts.

To me, the most important element of birding was to get a really good view of a bird rather than simply ticking it off. I became obsessed by looking for all the details and colour components of a bird. During an invasion of Rough-legged Buzzards Buteo lagopus in central Europe in a spell of cold weather, I studied the birds’ faces and found that I could immediately tell a Rough-legged from a Common B. buteo by its face pattern alone. In southern Germany in those days, records of Rough-legged were accepted only if the feathered legs were seen. In response, I published a paper in Limicola in 1988 using sketches to show how face patterns were a reliable guide to identification (photographic possibilities were limited back then). Many field guides showed the face pattern incorrectly until that time.

Throughout my life, I have tried to get closer to, and see more details of, birds without disturbing them. Hence my love of birds was always connected with my love of optics. Even as a student I possessed no fewer than 11 pairs of good binoculars, including four Zeiss Jena porro models, and five telescopes. Even then I was renowned as an optics addict, and that in turn led to a meeting with Gerhard Swarovski, who wanted to enter the birdwatching binocular market at the end of the 1990s. Gerhard’s goal was to climb from no. 3 in the rank of high-grade optics to no. 1 within a few years. That target matched my proclivity for perfection and I started working on the concept for the initial EL binocular. My idea of an ergonomic open hinge manifested in the EL binocular was such a success that it was copied by almost all manufacturers in the subsequent years.

After 15 years of copying, I began to wonder why there were no fundamentally new ideas on how to improve this concept. By then, I had worked out a new concept on the evolution of the open hinge; and when Richard Schmidt, former CEO of the Zeiss Sports Optics division, asked me to join the team at Zeiss, I got the opportunity to improve the existing open-hinge concept in a significant way. My idea was to relocate the focus wheel to a more ergonomic position and I developed a different weight balance concept, which I called ‘Ergobalance’, in parallel with expanding the field of view and a useful weight reduction. The result is the current Zeiss SF binocular.

As a birder I knew how important it is to have a large field of view and I pursued this advantage during the development of the new Zeiss Harpia scope. When testing the prototypes of the new Harpia in an area where Hen Harriers Circus cyaneus are abundant during winter, I discovered that I was able to separate juvenile males and females, and adult females, just by looking at their face pattern. Recalling my Rough-legged Buzzard work in the 1980s, I determined to research it further and publish the results. My initial plan was to ask my great friend Martin Woodcock to illustrate the work, but his untimely death in February 2019 meant that, with a heavy heart, I took to my camera to tell the story using photographs. 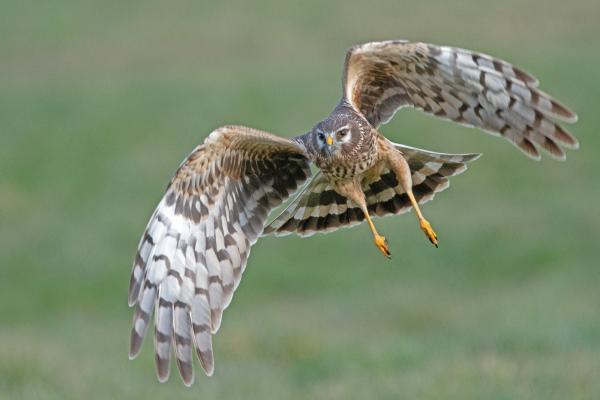