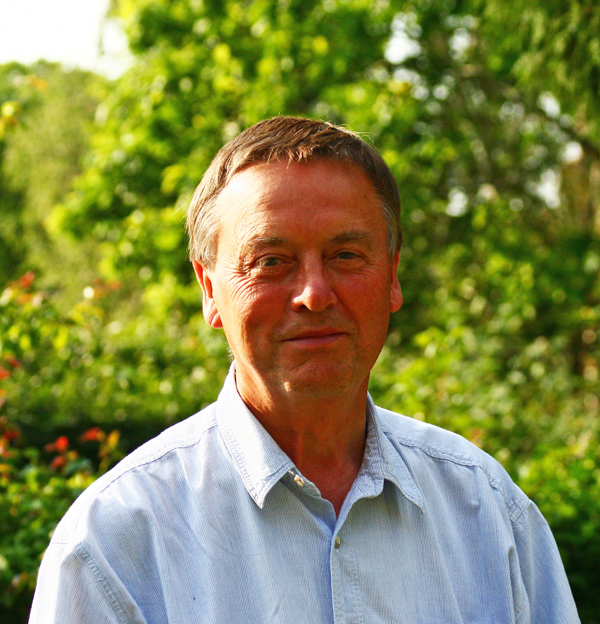 A tale of desertion, murder and incest No, this is not about the plot of the latest TV soap but rather about real-life drama - the behaviour of birds. Admittedly, these are not the sort of dastardly deeds that we are likely to see unless we take a close-up look, so that's the purpose of this BB eye - to foster support for watching what birds do rather than concentrating only on what they are. While on the subject of TV programmes, I have been prompted to write this by watching one - a programme that was episodic, at times dramatic but definitely not a soap. I'm talking about BBC Springwatch. It may not be everyone's cup of tea but, for me, one of its great strengths is the extensive use of cameras to observe bird and animal behaviour. The footage, which is obtained and interpreted by a team of expert naturalists, has illuminated some fascinating stories. I would never have supposed that a Peregrine Falcon Falco peregrinus would excavate its eggs from under several centimetres of snow and go on to hatch and rear a successful brood; or that Jackdaws Corvus monedula could be such aggressive bullies, willing to despatch nestlings of their own species to acquire an up-market residence. The cameras have illustrated the stories but first someone has to find the nests - no great problem if the birds, like the Peregrines and the Jackdaws, are occupying nestboxes, but far less simple for a species such as the Grasshopper Warbler Locustella naevia, which also featured on the programme recently. During one episode in June, the BTO's Dave Leech demonstrated his uncanny ability to find a Chiffchaff Phylloscopus collybita nest aided by his trademark skill of 'tapping' (the nest-finder's equivalent of water divining). He emphasised the value of, and encouraged others to participate in, the BTO's Nest Record Scheme. Following the programme, I was struck by comments on Hampshire Ornithological Society's e-mail discussion group about the novelty of someone on TV actually encouraging people to search for birds' nests. For many of today's birders this has been taboo throughout their lifetimes but for me, as a young lad growing up in the Derbyshire countryside, finding nests was a regular pastime. I still recall my excitement on finding my first Northern Lapwing Vanellus vanellus nest and the anticipation that came with the Easter holidays because the nesting season had begun. It was how I began watching birds. The Protection of Birds act introduced in 1954 brought a premature end to my nest-finding activities and it was not until many years later, through monitoring birds on the Thames Basin Heaths, that my childhood interest was rekindled. I began to appreciate how little I really knew about the birds I was counting and how difficult it was to be sure that my counts were accurate. Was the Woodlark Lullula arborea I heard singing on Saturday the same bird that I flushed 200 m away on Sunday? Why did some birds stop singing while others continued? How successful were the birds? Why did their populations appear to fluctuate from year to year? I realised that I could answer some of these questions if I could find their nests. With the help of my nest-finding mentor, Jim Baldwin, I began to searchÃ¢â¬Â¦ Some 250 Woodlark nests later, we had made some interesting discoveries. This is where desertion, murder and - yes - incest come into the story. I was, of course, well aware that some Woodlark nests fail but it came as a surprise to see, with the help of nest cameras, some of the reasons: a nest run over by a mountain bike, another squashed under a jogger's running shoe and a third trampled by a cow. Murder or, less sensationally, predation, is also commonplace but I hadn't realised how voracious a predator the Fox Vulpes vulpes is. I had been blaming other birds, particularly Carrion Crows Corvus corone and Magpies Pica pica for the loss of eggs and young, yet Foxes turned out to be a far more serious threat. But incest? Yes, thanks to colour-ringing, we found a male Woodlark paired with his sister. They weren't from the same nest but, as far as we can tell, from the first and second broods of the same breeding pair. 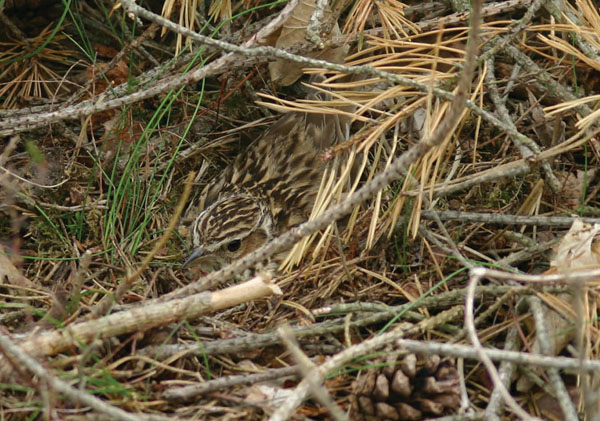 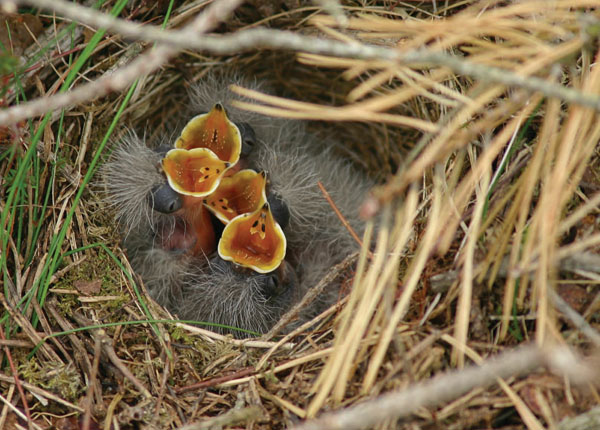 emale Woodlarks Lullula arborea sit tight, making the nest difficult to spot since the bird's brown-and-buff plumage blends superbly with the typical background vegetation. The nest can be easier to see when the adult is absent. In this case (a nest on the Thames Basin Heaths in May 2006), the bright yellow gapes of the four youngsters are very conspicuous. They show tongue and mandible spots typical of larks. Pics by John Eyre
In my mind, the key question is this: is it time for us to view searching for birds' nests in a much more positive way? I appreciate the potential arguments against - the risk of egg-collectors, disturbance, etc. - but the scientific evidence reinforces my own experience that nests can be visited without influencing the outcome. It must be done carefully, of course, and the BTO's Nest Record Scheme, which has its own Code of Conduct, is a great way to get involved. The benefits are obvious. It was nest records that demonstrated the impact of organochlorine pesticides on birds of prey in the 1950s and 1960s. They have also played a major role in explaining the effect of agricultural intensification on our farmland birds. Finding and monitoring nests teaches people about bird behaviour and breeding biology; indeed, the network of volunteer nest recorders in the UK now acts as a training resource for PhD students, NGO fieldworkers and consultants. It is also rewarding and, as I mentioned above, it was searching for nests that started me (and many others of the same generation) watching birds. So could there be another, less obvious, benefit? Kids love treasure hunts. Tracking down a well-hidden nest and glimpsing its gem-like contents would surely inspire the current generation just as it did mine. Should we be making more of this, in a controlled way of course, as a means of getting more young people interested in birds, and educated about them? John Eyre
Volume:
Issue 8
Start Page:
428
Display Image:
< Previous ArticleNext Article >