Rare vagrants have always exerted a powerful pull on our imagination. In an era dominated by the threat of ecological collapse this may be a somewhat disproportionate response to their real importance but nevertheless rarities remain true objects of desire.

This persisting fascination was given its current prominence by the announcement in 1959 of the formation of the ‘Rarity Records Committee’. Its first Report (covering 1958) contained records of nine Red Kites Milvus milvus ‘elsewhere than in Wales’ (noted as ‘a quite exceptional influx’), five Little Egrets Egretta garzetta and three Yellow-browed Warblers Phylloscopus inornatus (as well as an American Purple Gallinule Porphyrio martinica and a Rock Bunting Emberiza cia!).

A complete and authoritative history of BBRC appeared in Dean (2007). It charted the huge transformations in birdwatching which have taken place since the 1950s – the explosion in the number of skilled observers, the development of much-improved binoculars and telescopes, increasing mobility and foreign experience, the availability of more extensive and detailed literature, the increasing popularity of twitching and the appearance of bird information services, DNA-driven taxonomic turbulence and the rise of the internet and digital photography.

Against this fast-changing background BBRC has constantly had to adapt. Dean noted some of the main developments by 2007 – securing sponsorship from what was then Zeiss West Germany in 1983, backdating the Committee’s recording period to 1950, separating out Irish records, culling the list of species considered, adding a number of rare subspecies to the list, introducing ‘rolling’ statistics, moving from postal to electronic submissions and circulations, introducing ‘motorway’ batches to expedite the assessment of straightforward records, launching the Carl Zeiss Award, developing a comprehensive database and rolling out the BBRC website www.bbrc.org.uk.

The years since 2007 have seen more changes, including moves to provide ever-greater accountability and transparency in the Committee’s operations. For example, the BBRC website now contains a ‘Work in Progress’ file, which lists and gives progress updates on submissions, whilst information on acceptances and other announcements are disseminated through the @_BBRC Twitter account. The current Chairman has also introduced the ‘French letter’ as a means of communicating the reasons for a ‘not proven’ decision, an initiative which has been widely welcomed.

BBRC has also renewed its focus on rare subspecies, with detailed texts on each considered taxon now on the BBRC website. Rare subspecies pose many problems, of course, not least in terms of their sometimes disputed validity and often ‘fuzzy’ identification criteria, but nevertheless the British status of some previously neglected taxa such as ‘Northern Treecreeper’ Certhia familiaris familiaris will hopefully be more clearly revealed over time.

It has also been agreed to publish records of hybrids and intergrades involving a ‘BB rarity’ – birds which would previously have been deemed ‘not proven’ but whose occurrence is of undoubted interest and deserves recognition in the official record.

Further innovations include the introduction of status summaries in the Report, the refreshing of the criteria for adding and removing species from the BBRC list and the move to calendar year rather than plumage-based ageing. Much-appreciated sponsorship has also been secured from the RSPB in addition to the ongoing financial support from Carl Zeiss Ltd. Finally, and thanks to the hard work of Nigel and Danni Hudson, the mammoth task of digitally scanning the entire BBRC paper archive has now been completed.

Looking ahead, the increasing proliferation and sophistication of technology seems destined to be the the most significant external factor affecting BBRC’s work. The most prevalent technology is of course digital photography. As recently as the 1990s it was unusual to see photographs accompanying submissions. Today, however, photographs feature in the majority.

Images have revolutionised the way in which we can scrutinise birds. For example, details of wing formulae or precise tail patterns are often now visible to assessors, whilst some very rare birds (notably Long-billed Murrelet Brachyramphus perdix, Amur Falcon Falco amurensis and Eastern Crowned Warbler P. coronatus) were first identified from their images after initially being identified as a commoner species. Photographs have also, on a few occasions, enabled an identification to be corrected. This valuable role as a ‘check and balance’ for both observers and committees is amply evident in this year’s Report, which contains corrections to three previously accepted identifications, all arising from outside input based on published photographs. (The fact that BBRC is just as fallible collectively as we all are individually is, of course, hardly a surprise, and such corrections are welcome.)

However, photos are not always the ‘silver bullet’. Real problems can be caused by ‘over-interpreting’ poor images, whilst photographs are notoriously variable in accurately representing plumage hues – a particular problem with taxa such as Daurian Lanius isabellinus and Turkestan Shrikes L. phoenicuroides where these can be an important component of an identification.

The increasing reliance on photographs has also resulted in a massive decline in the traditional disciplines of taking field notes and sketches and writing full descriptions. These always add extra information and bring additional perspectives, although notes, and perhaps particularly artwork, are of course also vulnerable to the brain’s wonderful ability to ‘fill in the gaps’ and depict what we think we saw or what we would like to have seen.

The answer is, of course, that both photographs and field notes have their strengths as well as weaknesses but that their strengths can be complementary. Certainly, despite frequent assertions to the contrary, there is not currently (and never has been) a ‘blanket’ BBRC policy to demand photographs as a prerequisite for acceptance (although exceptionally problematic species such as American Herring Gull Larus smithsonianus probably require them). Whether this policy will survive in an increasingly photograph-dominated environment, however, remains to be seen. 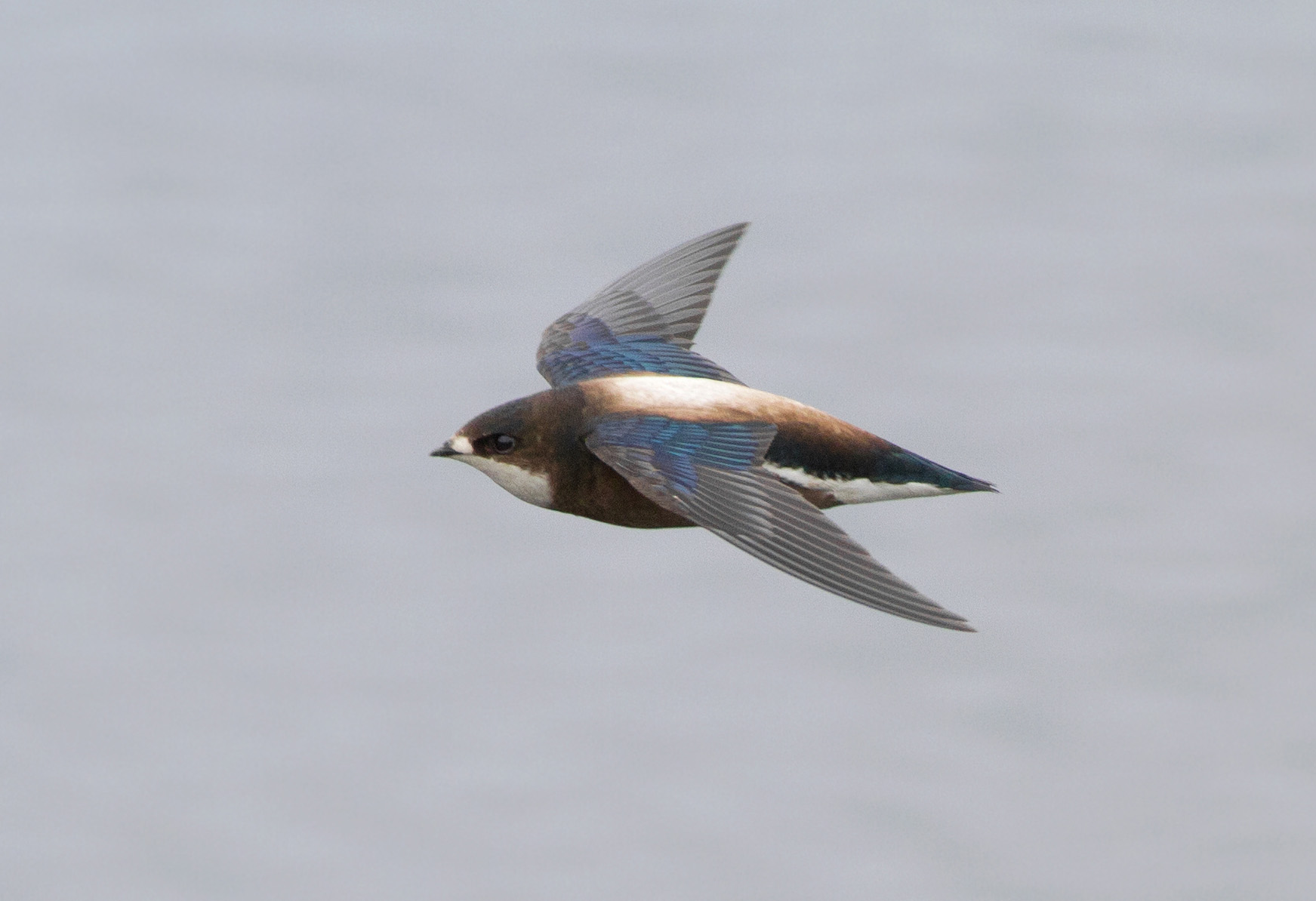 A further technological challenge is provided by the increasing use of DNA evidence in both taxonomy and identification. A significant recent event for BBRC has been the decision by BOU to relinquish its role as a taxonomic authority and adopt the IOC World Bird List as the basis for the official British List. This has forced BBRC to address new identification challenges arising from the DNA-based splitting of a number of former subspecies, for example Siberian Saxicola maurus and Stejneger’s Stonechats S. stejnegeri. There might be no quick answers to the identification of such ‘cryptic species’ and, although it may not be a popular development, the trend towards more acceptances to the level of ‘species pair’ or even (as is increasingly the case with rare seabirds) ‘species group’ seems destined to continue.

Meanwhile, identifications at both species and subspecies level supported partially or wholly by genetic analysis now appear routinely in BBRC Reports. Indeed, a number of taxa, including Siberian and Stejneger’s Stonechats, ‘Central Asian Lesser Whitethroat’ Sylvia curruca halimodendri, ‘Caspian Reed Warbler’ Acrocephalus scirpaceus fuscus and ‘Eastern Grasshopper Warbler’ Locustella naevia straminea have to date been accepted only on the basis of this type of evidence, although it is pleasing that some of these taxa have also been provisionally identified in the field before being confirmed by DNA. Of course, genetic analysis needs to be interpreted with care and viewed in the context of other categories of evidence but it will no doubt feature ever more regularly in BBRC’s work. The increasing number of such ‘DNA-only’ taxa may be a further frustration for some but it is an inevitable consequence of these wider developments.

Yet another technological challenge is that posed by the growing use of sound recordings. This is already contributing to BBRC’s work, with, for example, Eastern Yellow Wagtails Motacilla tschutschensis, Iberian Chiffchaffs P. ibericus and unseen Red-throated Pipits Anthus cervinus (see pp. 613–614) increasingly accepted on the basis of this type of evidence. Such records will surely become more common in future but their interpretation will require new knowledge and skills by both observers and the Committee.

A further technological context for BBRC’s work is the proliferation of places in which records of rare birds can now be published. These include not just journals but social media, personal websites and blogs and, increasingly, bird recording platforms such as BirdTrack and eBird, the last now containing a review mechanism for rarity records. This claims to offer, through a single ‘reviewer’, a rapid and ‘light touch’ approach to rarity assessment. There are, however, a number of problems inherent in this model, the most acute of which is how to deal with difficult records. The committee model ensures that a wide pool of expertise is drawn upon whilst also ensuring that one person’s opinion does not hold sway – even acknowledged experts in particular species or groups are sometimes demonstrably wrong.

In reality, the more comprehensive approach offered by a ‘rarities committee’ has proved to be highly durable and has been replicated across much of the rest of the world. As noted by Adam Rowlands in the Report for 2010: ‘We remain convinced that the collective deliberations of ten Committee members makes for more robust decision-making than the conclusions drawn by individual commentators or collective attempts at judgement through web-based forums.’

The 2018 Report contained in this issue presents a British avifauna and a birdwatching scene which would barely be recognised by the observers of 1958. Red Kites, Little Egrets and Yellow-browed Warblers are now part of the scenery whilst species such as Pallas’s Leaf Warbler P. proregulus, Red-flanked Bluetail Tarsiger cyanurus and Olive-backed Pipit Anthus hodgsoni, hardly even on the radar sixty years ago, have in the intervening period become sufficiently frequent that they are now treated as scarce migrants rather than rarities. At the same time, the supply of new birds to Britain (such as 2018’s White-rumped Swift Apus caffer) seems, at least for the moment, inexhaustible. On the other hand, once-regular rarities such as Lesser White-fronted Goose Anser erythropus and Yellow-breasted Bunting Emberiza aureola have become extreme vagrants, with others, such as Kentish Plover Charadrius alexandrinus and Aquatic Warbler Acrocephalus paludicola apparently heading in the same direction.

Sixty years on from 1958, therefore, the ‘Rarities Report’ continues to occupy an important place in the ornithological calendar. Alongside the other annual summaries of Britain’s birds – the scarce migrants and rare breeding birds reports – it provides a compelling commentary on the changing fortunes of our rarest visitors. The great shifts in status chronicled in its pages provide fascinating data on Holarctic bird dispersal but also carry increasingly urgent messages about where conservation priorities might lie.

BBRC continues to strive for a rigorous and transparent approach to maintaining recording standards, and the evidence is that the ‘Rarities Report’ is still valued as the ‘official’ statement on rare birds in Britain. However, the Committee cannot afford to be complacent. The challenge for the future will be to continue to adapt and remain responsive to the needs of both birdwatchers and the birds themselves.