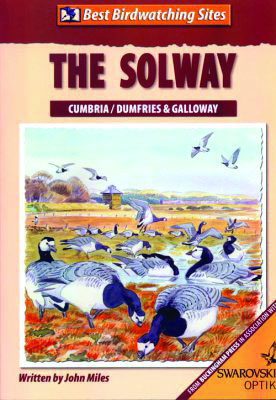 Buckingham Press, Peterborough, 2010; pbk, 240pp, maps, black-and-white illustrations; ISBN 978-0-9550339-3-3; Subbuteo code M20849 £17.50 I first met John Miles a couple of years ago at Carstramon Wood when he was researching the northern (Scottish) side of the Solway. He was following what appears as the Laurieston/Creetown Drive (route no. 15) on his bike. It is nice to read information that I provided John with regarding the main species using the wood (although to read further in the text that Long-eared Owls Asio otus can be seen in daylight on nearby Cairnsmore of Fleet rather than Short-eared Owls A. flammeus is, I hope, a printing error). As my local knowledge does not extend to all of the Cumbrian sites, it is best for me to comment on one well-known site, Caerlaverock WWT reserve, following the series formula that this book follows. Key points: I like this feature as we all need food, drink and toilets at some point in our day. Target birds: These are listed with a guide to the chances (given in percentages) of connecting with them on any given visit. Throughout the book these seem to me to be ambitious percentages. Of course, birders are eternal optimists but I make visits regularly without achieving the percentages claimed for many species. Other possible bird species: An easy list but well presented. No doubt the recorders of Cumbria and Dumfries & Galloway would have wished the existence of appropriate bird reports to have been stated in the text. Background information and birding tips: For this site and throughout the book these are excellent. To see in print the fact that the view from the top of the Avenue Tower offers great views around the reserve is a nice understatement. The views are of many other sites mentioned on both sides of the Solway. For many sites the text is as up to date as one could wish. For example, the fact that Threave Estate has a viewing platform for Ospreys Pandion haliaetus has only just been learnt by some of the non-birding locals. Two of my grandsons were 'spaced out' last April by the sight of fantastic Ospreys freshly arrived from Africa being put through their aerial paces by resident corvids. If all the sites in Cumbria (24) are as well researched by John as the north Solway sites (33), then I am in for a treat when I do visit them. In Dumfries & Galloway we are well used to navigating either from east to west or from west to east, which rarely results in sites being wrongly named or numbered on maps. Once again, no local proofreading has resulted in Browhouses moving to Brow Well and vice-versa. This would not happen without the formulaic alphabetical system. This is a good guide (John Miles's obvious enthusiasm for the whole Solway area shines through) and I hope that it will encourage many birders who are racing north for White-tailed Eagles Haliaeetus albicilla to turn left at Kendal or Gretna and enjoy Solway birding without all the madding crowds. The percentage chance of eagles is higher than you think. Brian Smith Buy this book from theÂ British BirdsÂ bookshop which is run byÂ Subbuteo Natural History Books This means thatÂ 5% of all sales generated byÂ British BirdsÂ subscribers, whether it is books reviewed in the journal, featured on its book page or listed on the Subbuteo website, will be paid toÂ British BirdsÂ - and will directly support the production of the journal. To browse the British BirdsÂ bookshop, please clickÂ here
Volume:
Issue 4