The Birds of the Iberian Peninsula 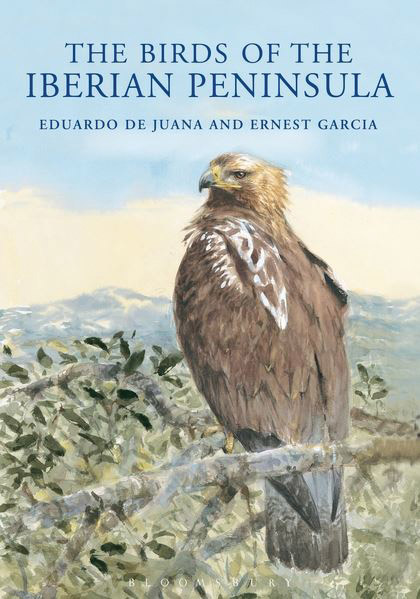 By Eduardo de Juana and Ernest Garcia Christopher Helm/Bloomsbury, 2015; hbk, 688pp; 64 colour photographs, 216 black-and-white illustrations ISBN 978-1-4081-2480-2 Â£60.00 Despite the popularity of Spain as a holiday destination, travelling birders have struggled to find a book that accurately describes the status of birds in that country. Although there are various site and regional guides, while Birds of the Strait of Gibraltar (1992) covered Gibraltar and the Spanish province of Andalucia, the two volumes of Aves IbÃÂ©ricas (1996-99) have provided the most useful source for detail of bird distributions throughout the rest of the Iberian Peninsula. However, that was published in Spanish and before much of the recent groundbreaking atlas work had been undertaken. Portugal has been better served: Aves de Portugal, Ornitologia do TerritÃ³rio Continental, published in Portuguese in 2010, is an excellent account of that country's avifauna. But now, after a long gestation period, we have this impressive new tome, in English, by Ernest Garcia (well-known for his expertise on Gibraltar and Andalucia) and Eduardo de Juana, whose field guide GuÃÂ­a de las Aves de EspaÃËa (Lynx Edicions, 2005) has made him a household name in Spain. The book covers mainland Spain and Portugal, plus the Balearic Islands, Berlengas archipelago, Andorra and Gibraltar, but not the more distant Atlantic island groups of the Azores, Madeira and the Canaries. The introductory chapters provide a very good overview of the region and what it has to offer both birds and birdwatchers. The geography, climates and habitats are all described - and many are illustrated in the 64 excellent colour photographs that are grouped together. The species accounts are thorough, some up to 2,000 words in length, although they could have benefited from a more obvious layout and use of subheadings. In addition, the authors have been rather inconsistent in their descriptions of status. For example, the Whooper Swan Cygnus cygnus 'occurs sporadically' but the text reveals that there are only 19 records of 56 birds from 1939 to 2007; yet White-fronted Goose Anser albifrons, with 142 records, is 'a rare visitor', while Barnacle Goose Branta leucopsis, with 132 records, is 'a scarce visitor'. For some rarer visitors, maps show the number of records per region, which is a useful idea, while for other species, such as Ferruginous Duck Aythya nyroca, the data are tabulated. There are also 216 bar charts showing seasonal or monthly occurrences, but for many the data are presented only up to 2010. Given that, to some degree, we have lacked detailed information on the status of Iberia's birds, it is good that population estimates are given for many species, and based on several recent sources, although these are sometimes conflicting (and the estimate of 1.1 million Black-eared Wheatears Oenanthe hispanica in Andorra is clearly an error, being also the number found in Portugal). Inexplicably, estimates are not provided for non-passerines, although figures are available from the recent atlases. For most species, maps show distributions and population density using a varying grey scale, and these work well. However, again there is a lack of consistency in the way the maps have been used. For some resident species one map is provided, for others two maps differentiate between summer and winter distributions, while for some species there are no maps at all. This is perhaps understandable for widespread common species, but why no map for Glossy Ibis Plegadis falcinellus - which is expanding its range and is present in all months in differing areas? Similarly, why no summer map for Great White Egret Ardea alba? And why show Peregrine Falcon Falco peregrinus distribution for summer but not winter? There are similar cases throughout the book where maps have not been included where they would have added value. Perhaps they were excluded to save space? The appendices cover a variety of aspects such as escaped species and conservation status, and for those wanting to delve further around 2,000 references are included. There is no doubt that a huge amount of effort has gone into this book and while I have been critical of some inconsistencies there is also no doubt that it is a tremendous improvement on what is currently available. Perhaps some of the inconsistencies are the result of that lengthy gestation period. Despite cutting back the text and reducing the typeface size to allow about 900 words on each page, the publishers have still ended up with a book that weighs in at a hefty 1.9 kg! This is an impressive book in many ways and deserves to be on the bookshelf of every travelling birder in Europe. Keith Betton Buy this book from theÂ British Birds bookshop, which is run byÂ Wild Sounds
Volume:
Issue 9