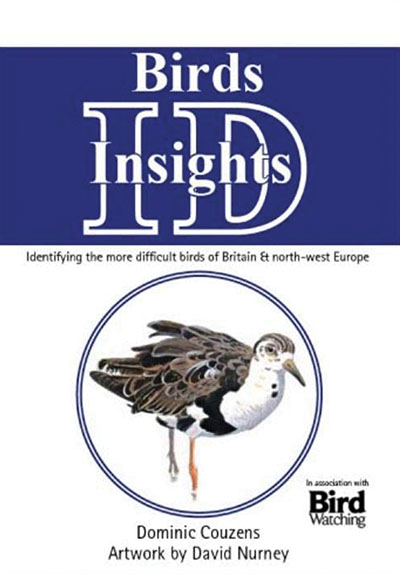 New Holland, 2013; hbk, 272pp; many colour illustrations ISBN 978-1-780-09058-0, Subbuteo code M21318, £16.99 This identification guide is aimed at 'improvers', those wishing to take their identification skills to the next level, becoming more confident with separating traditional 'problem pairs' such as Willow Warbler Phylloscopus trochilus and Common Chiffchaff P. collybita and also identifying a wider range of scarcer species. It springs from the long-running series of identification articles published in Bird Watching magazine and so its approach differs from that of a conventional field guide in that it covers only a selection of species or species pairs/groups. The scope is broader than just Britain, covering a wider range of northwest European species (though Arctic and Mediterranean species are not included). The book begins in the usual fashion with a brief introduction covering bird topography and plumage terminology. Then, each identification section has a very short introductory text detailing the species covered, their distribution, size, habitat, etc. Next come the annotated illustrations, which form the main focus of the book. The drawings are sketchy and diagrammatic rather than feather-perfect but this is entirely in keeping with the book's aim of presenting a species' distinctive demeanour and general appearance rather than its plumage minutiae. The drawings go beyond those in many field guides, showing birds in action, from a variety of angles, etc. Most of the drawings are pleasing and some, such as the Ring Ouzel Turdus torquatus and Green Woodpecker Picus viridis, are just delightful, almost Ennionesque. Some are less successful, however, and this deficiency goes to the heart of the problem with a 'jizz-led' approach. Some forms/species (e.g. Caspian Gull Larus cachinnans and Greenland Redpoll Carduelis flammea rostrata just do not lend themselves to this type of deliberately 'sketchy' treatment and it is no surprise that these are among the least convincing and informative illustrations. The reader is unlikely to be able to recognise either of these two from what is presented here. This book therefore reinvigorates the old 'jizz versus tertial fringes' debate. In reality, some birds require a more detailed analysis than others and the trick is knowing how to strike the right balance between the two approaches. Here, the reader could, on occasion, do with a little more guidance. Despite such niggles, however, this is still a useful book. It is bright, appealing and well laid out, while its treatment of the traditional problems is sound. It should serve its target market well. Andy Stoddart Buy this book from theÂ British BirdsÂ bookshop which is run byÂ Subbuteo Natural History Books This means thatÂ 5% of all sales generated byÂ British BirdsÂ subscribers, whether it is books reviewed in the journal, featured on its book page or listed on the Subbuteo website, will be paid toÂ British BirdsÂ - and will directly support the production of the journal.
Volume:
Issue 12