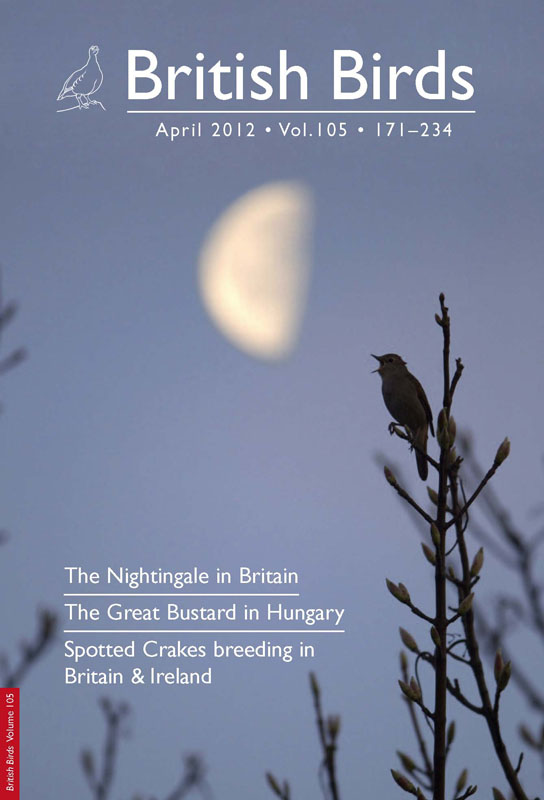 Summary of contents The historical status of the Great Bustard in Britain Mike Shrubb charts the early documentary evidence which provides good reason for believing that the Great Bustard did not colonise Britain until around the mid fifteenth century. This was perhaps part of a general increase in Europe and rooted in major ecological changes brought about by climatic deterioration and severe epidemic disease from the early fourteenth century. From the seventeenth century, the species was a regular and familiar member of the English avifauna and contemporary accounts do not suggest that it was a scarce bird within its restricted range. It declined very rapidly from the late eighteenth century, a decline largely fuelled by human persecution. Inconsistency in the taxonomy of Hen and Northern Harriers: causes and consequences The Hen Harrier and Northern Harrier are classified as conspecifics by some modern authors and as separate species by others. The tendency to treat the two as conspecifics may have its origin in erroneous nineteenth-century illustrations, and their allopatry has meant that twentieth-century adherence to the Biological Species Concept has hindered attempts to classify them to universal approval. Andrew Dobson and MichÃÂ¨le Clarke tell how this difference of opinion is a hindrance to our understanding of both harriers, and may adversely affect their conservation. Spatial and habitat-related influences on the breeding performance of Merlins in Britain Graham Rebecca reports on an analysis of over 1,000 Merlin nest records following a national survey in Britain in 1993-94. The broad-scale principal habitat, altitude and nest-site were assessed in relation to clutch size, successful brood size and productivity for 13 study areas. The majority of breeding areas (87.5%) were found in five different moorland types. The use of tall conifer plantations for nesting, away from previously documented areas in southwest Scotland, northeast England and Wales, was not widespread. Habitat choice influenced nest-site, with 77% of nests on the ground in heather, 19% in old stick nests in trees and 2% on crags. Productivity for the two years combined varied with both study area and in relation to the principal habitat type. Guidelines for bird photographers David Tipling has put together a new code of practice for bird photography - essential reading for everyone taking a camera along with them when out birding. Notes Topics covered include Peregrine Falcon nest relief at night, an apparently melanistic Lesser Black-backed Gull and the roosting behaviour of Chiffchaffs wintering in Britain. As usual, a range of reviews, news & comment and a summary of recent reports complete the issue.