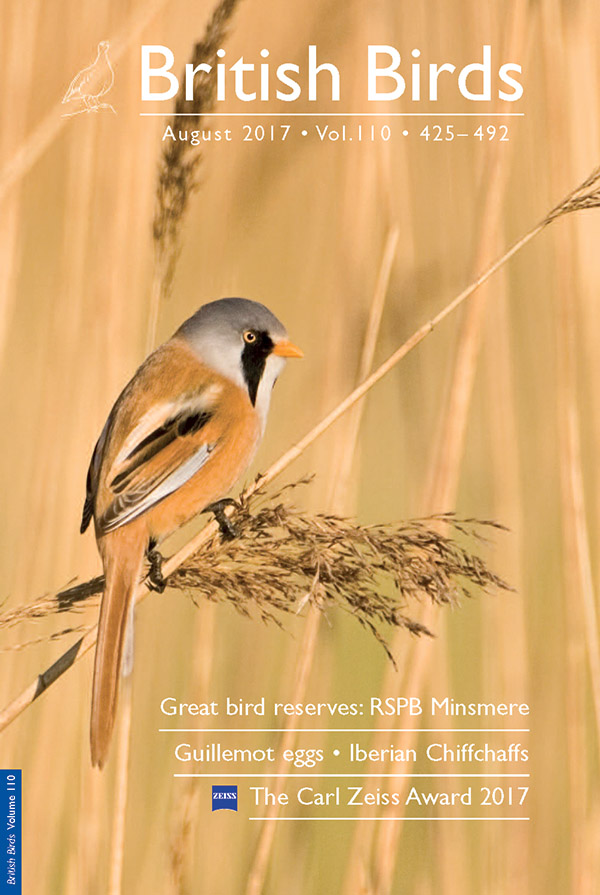 BB eye Photography is transforming British birdwatching Great bird reserves: RSPB Minsmere Minsmere, which celebrated its 70th anniversary as an RSPB reserve in 2017, has been an inspiration to naturalists and birdwatchers through its variety of habitats and species, its role in saving some of the UK’s most iconic breeding birds and the sense of space, peace, connection with nature that it provides. Vulgar errors – the point of a Guillemot’s egg The egg of the Common Guillemot is one of the most strikingly beautiful of all British breeding birds. Equally striking is its pyriform shape, and the biological significance of this has long been misinterpreted. Traditionally it has been thought that the shape is related mainly to the prevention of the egg from rolling off the often precarious breeding ledges. This paper brings the story up to date. The Carl Zeiss Award 2017 The Carl Zeiss Award is now awarded for the best rarity submission of the year. This year’s winner was ‘a veritable masterclass of the photographic submission genre’. Primary moult in Iberian Chiffchaff as a means of ageing and identification Iberian Chiffchaff has become an annual vagrant to Britain, but in some cases the identification of this subtle species remains extremely challenging. Differences in moult patterns between Iberian Chiffchaff and Common Chiffchaff may in some cases be useful for field identification. Primary spacing as a field identification criterion for Iberian Chiffchaff Differences in the primary spacing between Iberian Chiffchaff and Common Chiffchaff are described, based on measurements from good-quality photographs of birds on the breeding grounds. Notes Dispersive migration of a female Great Spotted Woodpecker between breeding and wintering sites in Britain Obituaries Dick Potts My patch Titchfield Haven – Amy Robjohns Book reviews, Recent reports and News & comment complete the August issue.