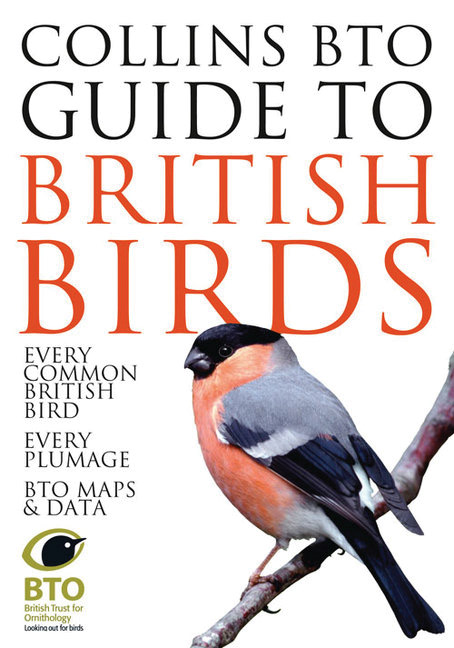 By Paul Sterry and Paul Stancliffe Collins, 2015; pbk, 320pp; numerous colour photographs ISBN 978-0-00-755152-1 Â£15.99 This is quite a departure for the BTO. Not only is it the organisation's first foray into field guide publication, but it has also opted to produce a field guide that uses photos rather than plates. The Collins BTO Guide to British Birds illustrates all of the regular breeding birds, wintering species and passage migrants that occur in Britain and Ireland and is primarily designed for the beginner birdwatcher. (Its companion volume, the Collins BTO Guide to Rare British Birds, launched at the Birdfair, covers every other species that has occurred five times or more up to February 2015.) What sets it apart from other field guides (apart from the Crossley ID Guide) is how the birds are depicted (by an excellent selection of 1,200 photos and computer-generated images, largely taken/created by Paul Sterry) and also the innovative use of BTO Atlas and BirdTrack data to illustrate distribution/abundance and the likelihood of seeing a species in its regular haunts. After a commendably succinct one-page preface, the reader is then introduced to the BTO, bird observatories, ringing and a brief explanation of the value his/her sightings can have in the context of BTO surveys and census work. 'Where and when to see birds' explains the map and 'calendar wheel' that appears with every species account. The latest Atlas maps have been distilled to present summer/winter/resident distribution and abundance on just one, rather small, map. But the 'calendar wheels' are a novel addition to the British field guide genre. The 12-slice pie charts show which months of the year one can expect to see a particular species in the areas where it occurs and each chart also has a score. So, for example, Common Nightingale Luscinia megarhynchos scores 16, which means there's a 16% chance of seeing a Nightingale in its core breeding areas in summer, according to observer returns to BirdTrack - or rather it's recorded on 16% of visits to those areas. This is a very useful tool for the novice birder who isn't sure how likely it is that he/she will see - or hear - a Nightingale while birding in southeast England in May. 'Identification aids' has five pages of bird topography (that don't shy away from greater coverts and malar stripes) and is followed by nine pages of 'Default birds'. This selection of birds we all subconsciously use as yardsticks when identifying an unfamiliar species is a very good idea: for example, default gulls (Black-headed Chroiocephalus ridibundus and Herring Larus argentatus), default raptors (Eurasian Sparrowhawk Accipiter nisus, Common Buzzard Buteo buteo and Common Kestrel Falco tinnunculus) and default waders (Dunlin Calidris alpina and Eurasian Curlew Numenius arquata). After brief introductions to 'Behaviour and Jizz', 'Voice and Song', 'Birds and Weather', 'Bird Migration' and 'Habitats for Birds' (what you're likely to find and where), we reach the 248 species accounts. Each species has a single page with concise text and a range of photos of the bird at rest and in flight, with summer and winter plumages where relevant. Adult and juvenile are both illustrated where appropriate. Supplementary double-page photo spreads that depict winter wildfowl in flight (on estuaries and on fresh water), waders, raptors, warblers and ageing in gulls are all very instructive. A lot of thought has gone into the design of this field guide with a lot of information, both textual and visual, shoehorned into every page. If I have a criticism, it's that there is perhaps too much crammed into some of these single-species, single-page accounts - some of the flight shots of gulls are pretty tightly packed, for example. The photographs, many of which are previously unpublished, are well chosen, highlighting key identification features. But the fact that they are often 'cut out' against a white background lessens their aesthetic appeal. And there's the dilemma for the field guide buyer - photos or plates? That other Collins guide, The Collins Bird Guide (Svensson et al.), has plates that are probably unsurpassable (with great aesthetic appeal) and incredibly detailed text. But is it a field guide for the beginner birdwatcher? Probably not. Whereas the Collins BTO Guide to British Birds most certainly is. And not just beginners. There is plenty of useful information in this guide for birders of all abilities, not least the innovative depiction of distribution/abundance and likelihood of encountering any given species on any day of the year. If I was asked to recommend a field guide for someone new to birding, this would be it. And I would hope it set them on the path to enjoyable and productive bird data collection too, as I'm sure the BTO intended. Adrian Pitches Buy this book from theÂ British Birds bookshop, which is run byÂ Wild Sounds
Volume:
Issue 9