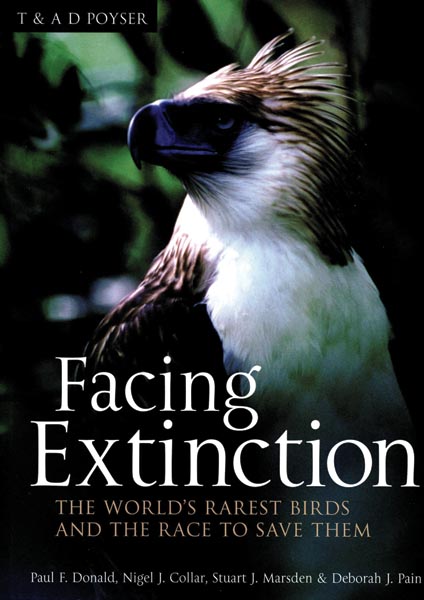 Facing Extinction is about the, for now, world's rarest birds and the race to save them from oblivion. About 10 percent of the world's 10,000 species of bird are currently considered threatened by IUCN, with nearly 200 being deemed 'Critically Endangered', facing the imminent prospect of extinction. On the bright side, birds are seemingly comparatively well off; some 80,000 species of plant, perhaps 25 percent of all known species, are now listed as threatened - although clearly you can't have the one, birds, without the other. Succinctly written, with refreshing language and style, concepts about rarity and extinction are presented in ready fashion (guaranteed no unintelligible statistics), making for an informative, if sobering, read. Included are sections on the nature of rarity; distribution and causes of rarity, including why some species in specific areas are inherently prone to be endangered; why island endemics are especially vulnerable (or in many instances already extinct); saving the world's rarest birds and 'the lost and the found'. The main themes of the book are examined using twenty in-depth case studies, each tackled in separate chapters. The lost and found section, by way of example, covers Gurney's Pitta Pitta gurneyi and Forest Owlet Heteroglaux blewitti (both extant) and Slender-billed Numenius tenuirostris and Eskimo Curlews N. borealis (both possibly gone for good). Each theme is preceded by a lengthy introductory chapter, itself a fact-filled essay well worth reading; these and the following related chapters outline a range of problems faced and potential in- and ex-situ solutions, some highly imaginative. The case studies give a background history and describe any scientific research conducted to establish the cause of a species' decline, along with the driving socio-economic and political forces as relevant. Sociable Lapwing Vanellus gregarius is a particularly good, well-researched case in point. Some associations, of cause and negative effect, may come as a surprise. Accelerated loss of the high-altitude Polylepis woodland, home of Royal Cinclodes Cinclodes aricomae, cut down to keep increased numbers of visiting ecotourists warm at night, is an undisputed own goal. There is copious use of colour photographs of subject species and their habitats, pencil sketches and maps, and easily interpreted charts and tables. Over a thousand references are cited and, increasing the book's utility, there is a comprehensive index. Although certainly a useful synthesis and stimulating read, just who the book's intended target audience might be is uncertain, especially given its price. We mostly know the threats faced and probably also what needs to be done, at least in general, to save almost any species, such that while the 'race' may, with cautious optimism, be one we can usually win, it is likely to be never-ending. Indeed, the book concludes with a chapter assessing where rarity will occur in the future, and why. This may serve to keep conservationists gainfully employed, though, regrettably, rarely ahead of the game. At £45 this tome is expensive, too expensive to guarantee ready sales, and even if, as stated, all royalties go to BirdLife International's Preventing Extinctions Programme, it would be better to borrow a copy and make a donation directly to BirdLife instead. Students of conservation practice should certainly read this scholarly book. Simon Aspinall Buy this book from the British Birds bookshop which is run by Subbuteo Natural History Books

This means that 5% of all sales generated by British Birds subscribers, whether it is books reviewed in the journal, featured on its book page or listed on the Subbuteo website, will be paid to British Birds - and will directly support the production of the journal. To browse the British Birds bookshop, please click here
Volume:
Issue 12