The Life of Buzzards 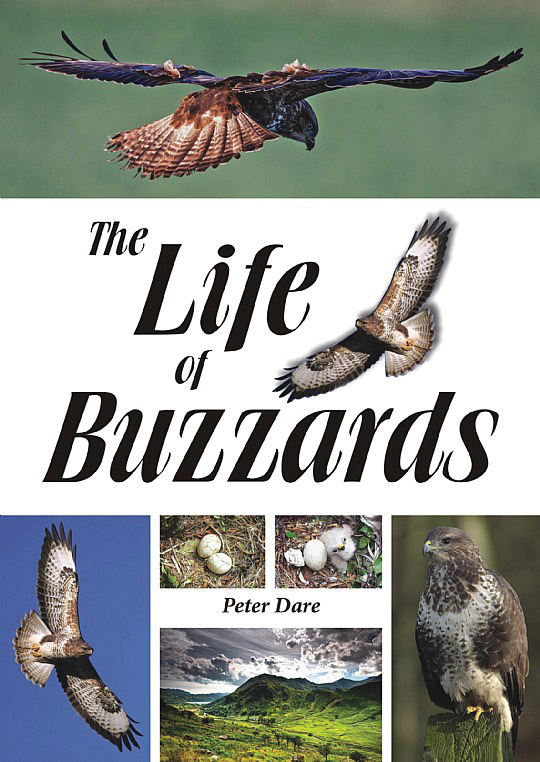 By Peter Dare Whittles Publishing, 2015; pbk, xii + 292pp; many colour illustrations and figures ISBN 978-184995-130-2, Â£22.99 Peter Dare's PhD thesis, (un)published in 1961, has long remained a well-kept secret, quoted by many but read by few. Titbits of his work subsequently found their way into handbooks and reviews but, certainly for us continentals, the real data never came within grasp (although in the study of Th. Mebs in Journal fÃ¼r Ornithologie 105: 247-306, published in 1964, we had an excellent counterweight). When this book was first announced, I hoped for detailed information from his study in Dartmoor in the 1950s. The book turned out to be so much more. This is no easy reprint of old work, but an up-to-date overview of work on the Common Buzzard Buteo buteo in Britain (15 sites across Scotland, England and Wales), including the author's ongoing studies in leisure time in Dartmoor (until 1969), Snowdonia (mid 1970s to 1982) and Suffolk (from the 1980s onwards). The last site was initially as bleak as can be as far as Buzzards were concerned, but the more than five-fold increase in Britain in the past decades at last also overwhelmed the eastern parts of the country. The discovery of a nest in East Anglia in 2006 must have been exhilarating. Rabbits Oryctolagus cuniculus play an important role in the book, which is not surprising given the author's focus on the impact of the Rabbit crash on Buzzards in the 1950s, following the introduction of myxomatosis. The suggestion is that Buzzards suffered, and that breeding success and productivity only started to recover after Rabbit numbers had recovered (the latter as late as the 1990s, albeit based on game-bag indices). The implicit link between Rabbit and Buzzard fortunes in Britain, i.e. increase in numbers and expansion of range since the 1990s, is apparent only. The long-lived Buzzard typically alternates between high and low breeding success in the footsteps of a spike in vole or Rabbit numbers and, in the longer term, density-dependent effects on reproduction are well known (as, for example, shown in Robin Prytherch's study, in Avon; Brit. Birds 106: 264-279). However, Buzzards are generalist predators, and the decline of a major prey item will rarely have long-term effects. The trigger behind Britain's upsurge in Buzzard numbers is therefore sought in slackening persecution. This may well be, but remember that Buzzard numbers on the Continent - where persecution is more localised and not nearly so intensive as in Britain - also increased dramatically, despite crashes in Rabbit numbers after the advent of Rabbit viral haemorrhagic disease, substantial and lasting declines in vole numbers (mainly Common Vole Microtus arvalis) and steep increases in intra-guild predation. Clearly, Buzzards are highly adaptable, numbers depending on a suite of environmental conditions, not all of which, nor their interplay, are known. Such and other caveats in research are pointed out throughout the text of this book. For any students or pensionados looking for study subjects, here is the ideal vehicle. There can be no doubt that the recent proliferation of the use of loggers in ecological studies will change our perception of what exactly drives Buzzards. Peter Dare's book is a reminder of the time that fieldwork was precisely that: being in the field from sunrise to sunset, outwitting the birds (or at least trying to), cycling 40 km daily to reach nests, examining broods up to four times a day, collecting prey remains, observing from hides, and devising experiments to validate pellets as a means to quantify diet. In fact, this book shows that interpretation of logger data can only be biologically meaningful when embedded in knowledge based on hardcore fieldwork. Quick and easy? Forget it. I love this book, for its laudation of uncompromising fieldwork. The inclusion of tables and figures, with data from the 1950s through the 2000s, is a much-appreciated bonus. It shouldn't deter the more casual reader as the text lacks jargon and is sprinkled with anecdotes. This book is truly an inspirational successor to Colin Tubbs's The Buzzard, published as long ago as 1974. Rob G. Bijlsma Buy this book from theÂ British Birds bookshop, which is run byÂ Wild Sounds
Volume:
Issue 10
Next Article >