It won’t be long now before the first Marsh Warblers of the year are back. Here in southern Sweden, my first is typically somewhere unexpected, such as in a rough patch of umbellifers and Hawthorns by the side of the road along my route to the supermarket. Invariably, it’s a singing male first detected by its song. Most often it will be gone by the next day but sometimes it will remain, singing for a week or two before falling silent. Sightings after that are rare until the juveniles are out and about in late summer. It’s a scenario not too different from modern-day records of breeding Marsh Warblers in Britain: singing males are found at coastal locations in late May, they soon fall silent and are often assumed to have moved on again; then, in summer, a family party appears and breeding is confirmed. Most breeding records in these locations are one-offs with little indication that birds return to the same spot the next year. That’s a far cry from only a few decades ago, when central and southern England had an established population of breeding Marsh Warblers. Through a combination of long-term local studies and data from the Rare Breeding Birds Panel and the Scarce Migrants reports, the local extinction and subsequent shift in breeding distribution of the Marsh Warbler in Britain has been chronicled and is presented here. As this month’s paper – and a forthcoming paper on Caspian Gulls – shows, changes in distribution can happen remarkably quickly; and while the causes for these changes may not be immediately obvious, documenting them provides an important record to aid future understanding.

280      The value of traditional orchards for birds    Simon Barker 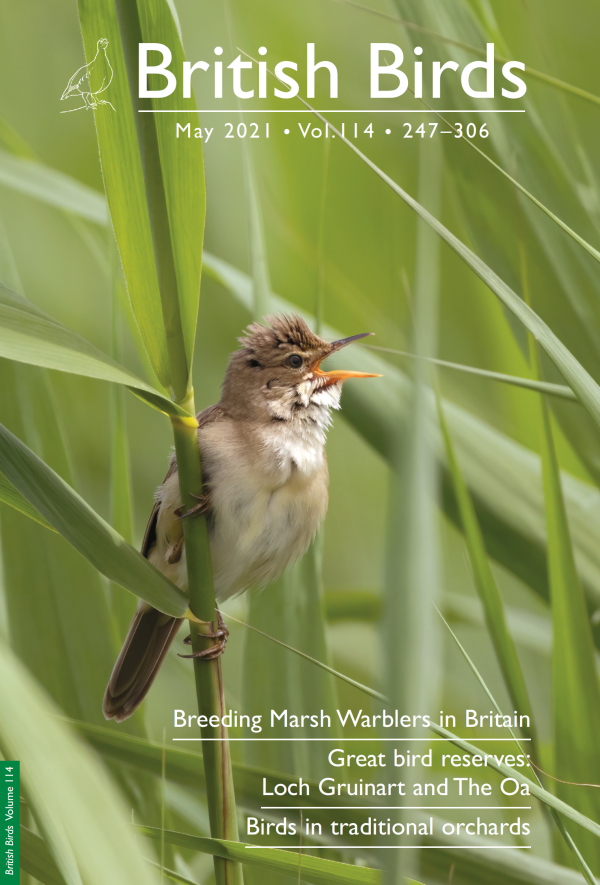