My patch: The Tremough 10k

Tucked away in the northeast corner of the Lizard peninsula, ‘Our patch’ is a circle of 10-km radius centred on the University of Exeter’s Penryn (Tremough) Campus, in Cornwall. It was originally conceived by PhD student Liam Langley as a way to explore the local birdlife and encourage a little (sometimes not so) friendly listing competition among the student birding community. Nicknamed ‘the Tremough 10k’ (or often just ‘the 10k’), this patch comprises a mixture of sites ranging from the underwatched to the ‘steeped in birding lore’, with the main focus on Falmouth Bay (viewed mostly from Pendennis Point, Swanpool or Maenporth), Carrick Roads, College and Argal Reservoirs, Devoran Quay and Stithians Reservoir. Encompassing a diverse array of habitats, these sites collectively hold a good range of both resident and migrant birds, and sometimes the odd surprise. Many of those within our small group of student birders have a Tremough 10k list over 150 species, reflecting both the area’s species diversity and the (at times obsessive) extent of our coverage. Currently, Liam Langley has the top 10k list, with 180 species, but it’s tight at the top! What follows is a chronological account of the birding year in the Tremough 10k.

Every May, Cornwall is treated to an influx of wandering immature Red Kites Milvus milvus, and our patch on ‘the hill’ above College Reservoir provides a perfect vantage point from which to enjoy this ornithological spectacle, with over 50 logged on the peak day in 2020. Regular sky-watches at College Reservoir last spring, mostly by Liam, were productive, with records of Marsh Harrier Circus aeruginosus and Hobby Falco subbuteo among others.

As with many patches, summer is generally quiet, although Stithians Reservoir is a great place to see breeding warblers. Last year we found two singing male European Nightjars Caprimulgus europaeus a short distance from campus after Matt Doyle and Liam chanced upon some suitable-looking habitat. Singing Firecrests Regulus ignicapilla are often seen on campus into June but we are yet to confirm successful breeding. Occasionally, rarities can turn up in midsummer: a Marsh Sandpiper Tringa stagnatilis found by Steve Votier was present at Devoran for a single evening tide in July 2018. 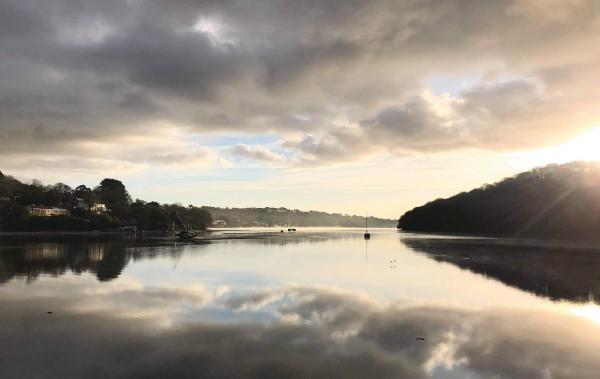 Tremough 10k birding reaches peak interest and excitement in autumn. Divers, grebes and ducks begin to return, the bay is busy with passage seabirds, sheltered valleys hold migrants and there is always the chance of a rarity. Devoran produces a great diversity of waders, and juvenile Ospreys Pandion haliaetus often linger for several weeks on passage. In 2016, the Dalmatian Pelican Pelecanus crispus touring the southwest found the site much to its liking, and there have been two Lesser Yellowlegs T. flavipes recently, including one that wintered in 2017/18. The reservoirs can be great for waders too, but this is heavily dependent on the water levels. Stithians Reservoir is known nationally for its track record of Nearctic waders, and we have enjoyed Wood T. glareola and Green Sandpipers T. ochropus in recent autumns, and a Temminck’s Stint Calidris temminckii in 2018. Luke Osanlav-Harris also found a Ring-necked Duck Aythya collaris there in September 2018, while College Reservoir delivered a double whammy of Whiskered Tern Chlidonias hybrida and Pectoral Sandpiper Calidris melanotos in autumn 2016, and a Pallas’s Leaf Warbler Phylloscopus proregulus in November 2020.

One unheralded aspect of the Tremough 10k birding calendar is the passage of winter thrushes over the campus just after dawn in mid to late October. Redwings Turdus iliacus and Fieldfares T. pilaris can often be seen heading northeast over the campus; counts of 1,500 Redwings are regular, with a record tally of 10,000 from former student Ben Porter on 22nd October 2016. Fieldfares occur in smaller numbers and the thrushes are often accompanied by smaller numbers of Skylarks Alauda arvensis, pipits and finches. In autumn 2017, we were treated to several Hawfinches Coccothraustes coccothraustes on our ‘vismig’ counts and six birds spent the winter in the large trees around campus. It is great to witness migration from the campus grounds only a short walk away from lecture theatres and student halls.

The coastal bays within the 10k are home to many wintering waterbirds. The three common divers can all be seen within the bay, but last year Calum Urquhart struck big with a Pacific Diver Gavia pacifica among Black-throated Divers G. arcticaoff Maenporth in January. This was surely one of the ‘regular’ wintering birds in Cornwall but a fantastic find nonetheless. The Carrick Roads (a sea inlet north of Falmouth) is another excellent winter site, holding one of the largest aggregations of wintering Black-necked Grebes Podiceps nigricollis in the country, and often the odd Slavonian Grebe P. auritus.

The reservoirs also hold a good variety of wintering waterbirds. The diversity is usually best at College Reservoir (and included Green-winged Teal Anas carolinensis in November 2020) but Stithians usually has a good selection of wildfowl, and a Lesser Scaup Aythya affinis spent the winter of 2019/20 there. Winter is also a time for gulls and while the coast here can’t compete with other Cornish sites, we have recorded both Iceland Larus glaucoides and Glaucous Gulls L. hyperboreus in recent years. Another local speciality is overwintering warblers: Yellow-browed Warblers Phylloscopus inornatus and ‘Siberian Chiffchaffs’ P. collybita tristis are regularly found at Swanpool NR, Carnon Downs Sewage Works and along the stream at the bottom of the campus. Winter stubble fields around campus are often popular with Skylarks and finches (occasionally Bramblings Fringilla montifringilla) and last winter seven Woodlarks Lullula arborea were present in fields just south of Falmouth.

The Tremough 10k is our ‘patch’ during the academic year. While it rarely competes with the county hotspots of the Lizard or West Penwith for rarity value, the Tremough 10k provides a constant source of birding entertainment, allowing us to explore diverse habitats on our doorstep and discover some cracking birds. We hope that future generations of prospective student birders will consider coming down to Cornwall to continue the birding legacy of the Tremough 10k.

Toby Phelps, with help from other students who have contributed to birding the Tremough 10k in the past four years: Matthew Broadbent, Matt Doyle, Gethin Jenkins-Jones, Liam Langley, Luke Osanlav-Harris, Ben Porter and Calum Urquhart