Nature's Conscience: the life and legacy of Derek Ratcliffe 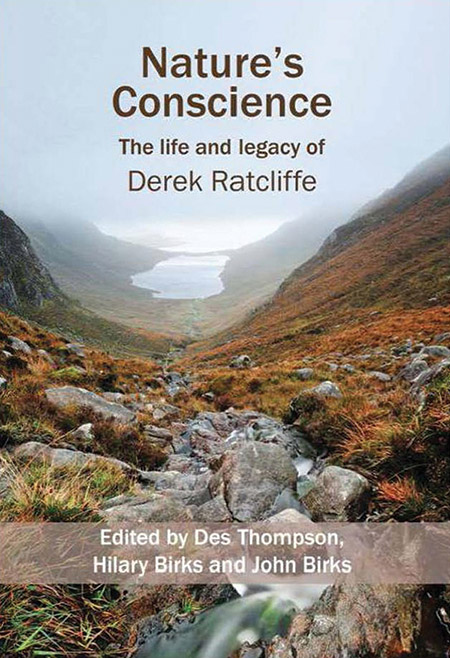 Edited by Des Thompson, Hilary Birks and John Birks Langford Press, 2015; hbk, 571pp; numerous colour photos ISBN 978-1-904078-60-0, £30.00 Derek Ratcliffe retired after 15 years as the Nature Conservancy Council's (NCC) Chief Scientist on 8th July 1989. Just three days later, Nicholas Ridley, then Secretary of State for the Environment, announced that it was to be split up into four separate agencies. A year later, in 1990, I joined the organisation as a seabird surveyor, blissfully unaware of all the upset, though I can still remember the heated discussions among colleagues over the causes and likely repercussions of 'the break-up'. Several chapters in this book were written by people who worked closely with Derek Ratcliffe in the run-up to that turbulent period, either within the NCC or as conservation 'collaborators' in one of the main NGOs. Their accounts provide a heady mix of nostalgia and lessons, still relevant today, for anyone interested in the mechanics and politics of conservation. Despite rising to such a senior position, Derek Ratcliffe seemed to be most content when spending long hours out in the field. His interests spanned the full range of wildlife, from ferns and liverworts tucked away in rock crevices, to scarce raptors and waders nesting on the same rocky outcrops or adjacent bogs and moors. If there is a common theme to such diverse interests, it is the wild, rugged nature of his favoured landscapes and the satisfaction to be had from searching out their less familiar inhabitants. In contrast, it seems he did not greatly enjoy the boardroom, particularly when up against powerful vested interests keen to manipulate the facts to their own ends. In this biography, the accounts of his pivotal role in revealing the effects of organochlorine pesticides on birds of prey (Ian Newton), and battles over the afforestation of peatlands (David Stroud and others) show how evidence, painstakingly collected in the field, is (although vital for the cause) merely a starting point. Derek Ratcliffe's lesser-known work in the 1970s, on the monumental Nature Conservation Review, is well described by Des Thompson and others. He devised innovative criteria for selecting the most important sites for wildlife and set out a convincing rationale for their protection. The results, brought together in two inspiring volumes, have influenced the conservation of protected sites ever since, both here in Britain and further afield. While Derek Ratcliffe may not have excelled as an advocate for nature conservation in the office meeting room or conference hall, he came into his own when putting his thoughts down on paper. Each section of the book is rounded off with a reprinted example of his work and these serve to illustrate his great talent as a writer, as well as his breadth of expertise. There are lucid accounts of mountain flora, the conservation of upland birds, reminiscences from his introduction to The Peregrine Falcon, and a more esoteric, though impeccably argued, paper on the philosophy of nature conservation. One wonders just how the editors decided which of his many publications to pick from. They could, equally, have chosen something from his monograph on The Raven, either of his two books in the New Naturalist series (Lakeland and Galloway and the Borders), or from his memoir In Search of Nature, all of which were written in the later years of his life. Indeed, much of the legacy referred to in the book's title is in the extensive written record he has left behind. I particularly enjoyed Peter Marren's beautifully crafted, honest and poignant account of his relationship with Ratcliffe, sustained largely through correspondence about their respective book projects over a period of 20 years. Several of the contributors who knew him best mention that, in later life, he became rather dispirited and even bitter when contemplating the state of nature conservation in Britain. It says a lot that despite his obvious affection for the British uplands he took to making annual visits to Lapland every summer to get his fix of healthy upland landscapes and their special wildlife. As he pointed out himself: 'probably they are a form of escapism, when I leave the awful problems of UK conservation behindâ€¦'. Those trips spawned yet another excellent book and a selection of his photographs from the far north is reproduced in Nature's Conscience, showcasing yet another of his talents. This book is well organised and richly illustrated throughout. The editors have done a fine job in drawing together the varied contributions from many different authors into a coherent whole. It will have wide appeal to anyone interested in nature conservation in Britain and is a fitting tribute to one of the most outstanding field biologists, conservationists and natural history writers of recent times. Ian Carter
Volume:
Issue 9