Oceanic Birds of the World: a photo guide 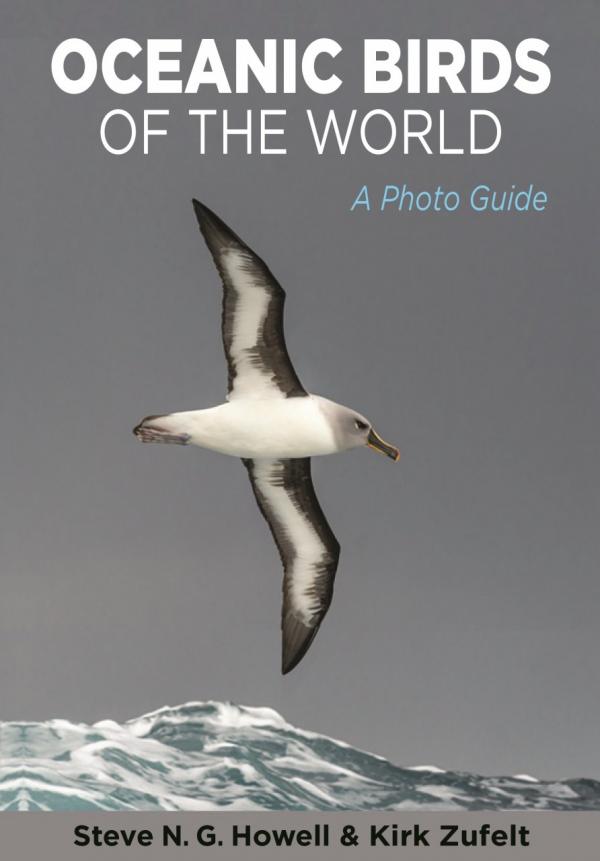 This new photographic identification guide to the world’s pelagic birds is a comprehensive, authoritative and impressive volume. The photographs are generally of an extremely high standard and are well presented, often as montages indicating how appearance may vary according to angle and light. The number of images per species varies according to the degree of variation shown but generally covers different age categories and plumage morphs as appropriate. In only a very few cases, when a taxon is very poorly known, are no images presented.

Distribution maps are provided for most species, the emphasis being on less well-known species and complexes. Known breeding sites are pinpointed and at-sea distribution is indicated where known. Each species has a short text giving size (length and wingspan), distribution (including patterns of movement) and details of flight action. Useful identification features are indicated mainly in plate captions and are brief but to the point (in many ways the photographs speak for themselves), focusing particularly on separation from obvious confusion species. Moult timing is an increasingly recognised identification tool for some species and is described when known. Species are grouped according to their similarity to one another and further identification pointers are given in chapter headings for these groups and complexes. This grouping approach means that different morphs of a particular species, for example Trindade Petrel Pterodroma arminjoniana, may be shown separately, several pages apart, but these are carefully cross-referenced.

While effectively conveying what is known about the field characters of each species, the authors are not shy about indicating that even given excellent and prolonged views, and even good photographs, some of the birds discussed cannot be safely identified in the field except pragmatically by location, at least based on current knowledge; a curious but refreshingly honest approach for an identification guide.

Remarkably for such a compact volume, this guide is also a thorough review of the taxonomy of the world’s seabirds. Placing more emphasis on biogeographical and phenological factors than traditional taxonomic approaches, though also incorporating recent research when it exists, the authors provisionally split a large number of new species. Many currently recognised subspecies are thus elevated to full species and several as yet formally undescribed taxa are also given species status. Among the more eye-catching taxonomic proposals from a Western Palearctic perspective are the elevation to full species of Catesby’s (White-tailed) Phaethon (lepturus) catesbyi and Arabian (Red-billed) Tropicbirds P. (aethereus) indicus; that White-faced Storm-petrel Pelagodroma marina becomes five species (two in the Atlantic); Black-capped Petrel Pterodroma hasitata is split into two species (White-faced and Black-faced); the former Madeiran/Band-rumped Storm-petrel Oceanodroma castro, already widely recognised as three species in the Atlantic, becomes a total of ten species (with six in the Atlantic and four in the Pacific); and Bridled Tern Onychoprion anaethetus is split into two species (one in the Atlantic and eastern Pacific, the other in the Indian Ocean and western Pacific). Of course, the elevation of many often very subtle, or even fully cryptic species serves to further compound the identification problems mentioned above but that is hardly new. After all, the British List has recently lost two species as a result of the identification problems posed by recent splits within the Madeiran/Band-rumped Storm-petrel complex and the elevation of Desertas Petrel Pterodroma deserta to species status. The taxonomic approach is discussed in chapter headings for each species complex and an appendix gives a useful summary of recently described and provisionally split species.

It is the nature of many seabirds that the application of traditional taxonomic practices is problematic; their remote, even undiscovered, breeding sites and mysterious life histories are major obstacles to research. While some might object to the ‘split-now-and-ask-questions-later’ approach adopted in this guide, nobody can deny that it is a major step forward in clarifying what questions need to be addressed, some urgently given the tiny populations and threats faced by several taxa.

For seabird enthusiasts this volume is an essential identification reference and a very useful summary of the current state of knowledge concerning these remarkable birds. It deserves a much wider audience too and would be a valuable addition to any birder’s library. Highly recommended.