Earlier this year, we requested an increase in the width of our Cordex binders, used to keep full volumes together at the end of each year. With several issues of BB now coming in well above the baseline 64 pages in length, it was becoming a tight fit to get all 12 issues plus an index into the binder. Nowhere is this expansion in content better showcased than the BBRC annual report.. That almost the entire issue is filled with the report is testament to the impressive time and effort that goes into making something like this happen – from the hundreds of records voted on by Committee members each year to the vast number of superb photographs that are now available for inclusion. Fundamental to all of this is the submission of records, received from birders who have been lucky enough to find a rarity, and from county recorders, who spend a considerable amount of time consolidating local records and making sure nothing slips through the net. Without birders in the field, rarities wouldn’t be found and the BBRC report wouldn’t happen.

Perhaps not surprisingly, given the events that unfolded last year and the resulting curtailment of time in the field for many, 2020’s report is a little slimmer than usual. Nonetheless, that so many rare birds continued to be found is impressive. Many of the year’s rarities were found by birders who turned their attention to their local patch, or their garden – as was the case with Britain’s first Yellow-bellied Flycatcher, which was found through the finder’s living-room window. Two more firsts for Britain from 2020 also make it into this report – White-chinned Petrel and Ruby-crowned Kinglet – along with two first-records from previous years – Brown Booby (the first four records of which come from 2019) and, after decades in limbo, South Polar Skua, which is finally added to the British List.

As was the case for so many of us, travel restrictions meant that I saw very few of the birds included in the 2020 report. Nonetheless, reading through the records and reviewing the photographs brought great pleasure, and I hope that readers take away that same enjoyment from a report that covers a year that was otherwise rather difficult for most. 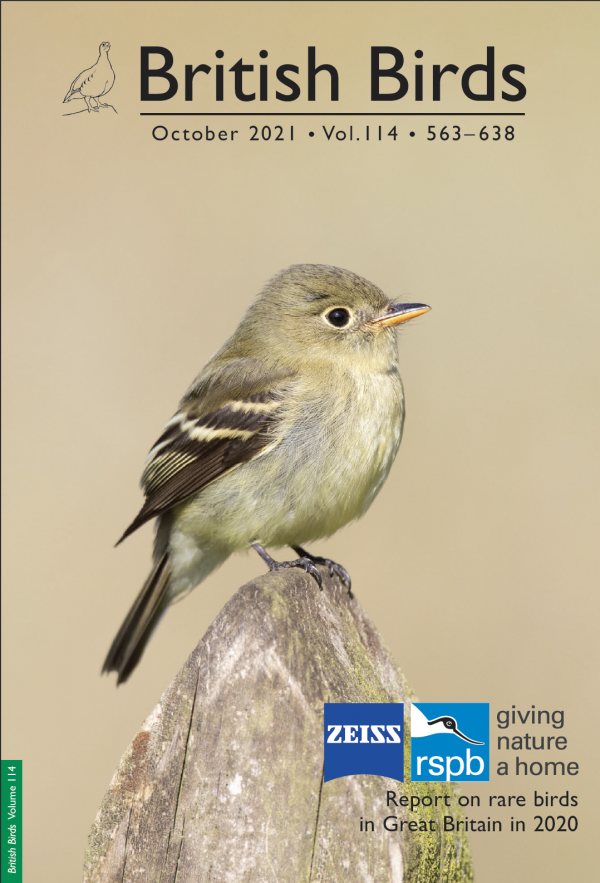