Parrots of the World, by Joseph M. Forshaw (author) and Frank Knight (illustrator) 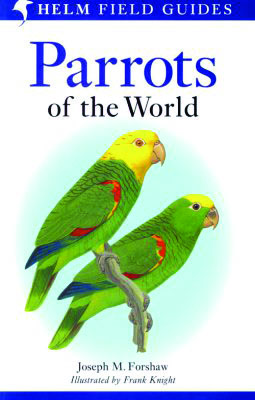 Christopher Helm, A&C Black, 2010; pbk, 336pp, 144 colour plates; ISBN 978-1-4081-3034-6; Subbuteo code M20773; £24.99 Subtitled by the publisher as a Helm Field Guide, this is a softback version of the plates and selected text from Parrots of the World: an identification guide published by Princeton University Press in 2006. That book, in common with most of Forshaw's previous works, was an attractive, large-format volume; it received little attention in the UK and was not reviewed in BB. I am sure that many will compare this new book with the similarly titled Parrots: a guide to parrots of the world, by Tony Juniper and Mike Parr, published in the Helm Identification Guide series in 2003. That volume is still available, and remains a valuable reference work. However, at half the price and half the weight, this new book will at least have a better chance of accompanying me on an overseas trip. But is it helpful to have all of the world's 356 parrot species in one field guide? I am inclined to think not, but I really like the layout of this guide. Frank Knight has included flight illustrations (from above and below) for most species and the birds are clearly shown in similar perched poses against a white background. Clear colour maps accompany a text that covers the main points on identification (with descriptions of differing subspecies), distribution and typical localities. The choice of nomenclature often proves to be a challenge, as Forshaw has always preferred to adopt names that are popular in the world of aviculture. For example, in around 40 cases the choice of common name had me searching the internet as it was not in regular use by any of the leading checklists or HBW. Furthermore, the term 'conure' has been used for about 60 of the smaller parakeets - and so I will adopt the same for this review. Forshaw's preference for avicultural names might not matter to those who buy his sumptuous art books but it is unhelpful in a field guide. A cross reference to the names used by others would have been very helpful. Parrot taxonomy has been the subject of a number of revisions since 2006 and several recent well-documented splits are not included. However three pages are devoted to the many forms of what was formerly known to many as Rainbow Lorikeet Trichoglossus haematodus - which is either split into seven species or lumped by various authors. Forshaw lumps them. However there are also examples where Forshaw splits species where the checklists prefer to be conservative. He splits the frontata and minor races of Aratinga wagleri (here called Red-fronted Conure, although better known as Scarlet-fronted Parakeet) to create Codilleran Conure. Similarly, the alticola race of Mitred Conure Aratinga mitrata is split as Mountain Conure. The taxonomy of Painted Conure Pyrrhura picta has always been in a state of flux, and while some authors are cautious, Forshaw splits it into four species. Also split is Rose-fronted Conure Pyrrhura roseifrons, which becomes three species. With so many excellent field guides appearing for regions of Africa and South America, it is hard to imagine many travelling birders carrying a parrot field guide as well. This book is well illustrated and available at a good price and, given that the large-format original is now out of print and sells for more than £100, it offers great value for money. Keith Betton Buy this book from theÂ British BirdsÂ bookshop which is run byÂ Subbuteo Natural History Books This means thatÂ 5% of all sales generated byÂ British BirdsÂ subscribers, whether it is books reviewed in the journal, featured on its book page or listed on the Subbuteo website, will be paid toÂ British BirdsÂ - and will directly support the production of the journal. To browse the British BirdsÂ bookshop, please clickÂ here
Volume:
Issue 4