Priority! The Dating of Scientific Names in Ornithology: a directory to the literature and its reviewers, by E. C. Dickinson, L. K. Overstreet, R. J. Dowsett and M. D. Bruce 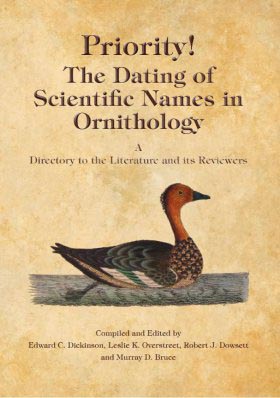 Aves Press, 2011; hbk, 319pp, CD-ROM containing 68 pdf files, 28 figures; ISBN 978-0-9568611-1-5; Subbuteo code M21204, £80.00 'Zoologists often raced to be first to describe a new animal.' Like the title, this arresting opening sentence captures the attention of the reader. Partly in preparation for the 4th edition of The Howard & Moore Complete Checklist of the Birds of the World, the authors have devoted a significant amount of effort to resolving the 4-6% of 100,000 'species-group' names (since the starting point of zoological nomenclature on 1st January 1758) which are associated with publications difficult to date. For many readers the discussions about the principle of priority and what does and does not constitute 'published work' are likely to be of particular interest. Under ICZN Article 9, among the categories of works that do not qualify are specimen labels, copies of unpublished work, abstracts, and text or illustrations distributed electronically. The last of these is likely to prove most problematical in the modern era. Despite impatience in some quarters with the need for printed copies of work, the reasons for it are clearly articulated in the discussion here. Whether the proposal of a requirement of prior registration in ZooBank of new zoological names being introduced electronically will be adopted remains to be seen, but whatever the outcome we should all be concerned about the traceability and long-term storage of electronic documents. The book is bound and nicely produced. The relatively narrow margins mean that space is well used but there is little room for readers to make their own annotations. In a work of this kind some typographical errors are to be expected, though I was surprised to find examples as early as page 15 and figure 5. The figures are reproductions of documents that illustrate points relevant to the accurate dating of scientific names; all are legible, even if some are inelegant. The introductory chapters discuss the International Code of Zoological Nomenclature, the historical and technical background of printing and publishing, and the resources used by the authors. The bulk of the book (pp. 69-253) is devoted to lists of books and periodicals with comments on dating issues. Some of the case studies discussed will be of interest to the editors of British periodicals: of the 15 listed, both Forktail and Ibis are considered to have presented some problems in relation to dates of publication since 2000. There is also a 13-page glossary and five indices. The accompanying CD-ROM contains tables compiled by the 56 distinguished zoologists or librarians from 26 countries who have contributed to this work. The data presented relate to 18 books and 47 periodicals, including Bull. Brit. Orn. Club, Forktail and Ibis. There is also an annotated review of date changes explained in the book, along with detailed notes. The authors are conscious that many ornithologists regard the dating of scientific names as being of minor importance. At one level, whether the naming of Phasianus colchicus tarimensis by Pleske should be dated to 1888 or 1889 does seem rather academic. Yet as with any field of human endeavour, if we adopt a system we should try to use it to the best of our abilities. Even when we fail, the mistakes we make during the process are often as interesting and instructive as the final outcomes. The reports on 148 books and 121 periodicals presented in this book cover most of the issues which influence the accurate dating of scientific names. Since scientific names are the current lingua franca of zoologists, we owe a debt of gratitude to those who have laboured long to achieve standard usage. Given the high price and esoteric content, I suspect that for most BB readers this book will not be a priority. For those whose work or interests involve the accurate dating of scientific names, be it in ornithology or other areas of zoology, it is an invaluable resource. Andrew Harrop Buy this book from the British Birds bookshop which is run by Subbuteo Natural History Books This means that 5% of all sales generated by British Birds subscribers, whether it is books reviewed in the journal, featured on its book page or listed on the Subbuteo website, will be paid to British Birds - and will directly support the production of the journal. To browse the British Birds bookshop, please click here
Volume:
Issue 3