Rare breeding birds in the UK in 2010

Mark Holling and the Rare Breeding Birds Panel Abstract The 37th report of the Rare Breeding Birds Panel includes details of 94 species or distinctive races that bred (or showed signs of breeding) in the UK in 2010, which turned out to be a particularly good year for rare breeding birds. As well as five species (Arctic Skua, Long-eared Owl, Short-eared Owl, Lesser Spotted Woodpecker and Willow Tit) that were added to the RBBP list wef 2010, two other species are new to this report (Great White Egret and Long-tailed Skua) and a further eight were not reported in 2009: Pink-footed Goose, Macaronesian Shearwater, Purple Heron, Marmora's Warbler, Subalpine Warbler, Melodious Warbler, Fieldfare and Common Rosefinch.

For species resident in the UK, the harsh 2009/10 winter, with prolonged periods of snowfall and sub-zero temperatures, was a testing precursor to the 2010 season. However, most of the breeding season was characterised by settled weather, especially from mid May to the end of June, which meant that weather-related disruption to breeding birds was minimised. Two pairs of Pink-footed Geese bred, in Cumbria and Highland, the first documented breeding of apparently wild Pink-footed Geese in the UK. A winter count of Capercaillies found that the total number of individuals had declined by 35% since the previous count, in 2003/04, to 1,285 individuals. A male Macaronesian Shearwater (= Little Shearwater) was heard calling from a burrow on Lundy, Devon. Despite the cold winter, the number of booming Eurasian Bitterns increased once more, to over 100, while the number of pairs of Little EgretsÂ Egretta garzettareached the 800 mark for the second year in a row. Purple Herons nested in the UK for the first time, fledging two young in Kent, while Little Bitterns nested for only the second time and two potential breeding pairs of Great White Egrets were present. Perhaps most unexpected of all, on the rare heron front, a colony of Eurasian Spoonbills was established in 2010, from which six pairs successfully fledged a total of ten young. Although the populations of many raptors continue to increase as they recover from historical persecution and the effects of persistent pesticides, some are still being held back by continued illegal killing and nest destruction. Three species stand out: Hen Harrier, Golden Eagle and Peregrine Falcon. The impact of persecution is most noticeable in some parts of the species' ranges, and the national survey of Hen Harriers in 2010, the results of which are summarised in this report, shows that the UK population has declined by 18% since 2004 and the risk of extinction in England is now very real. 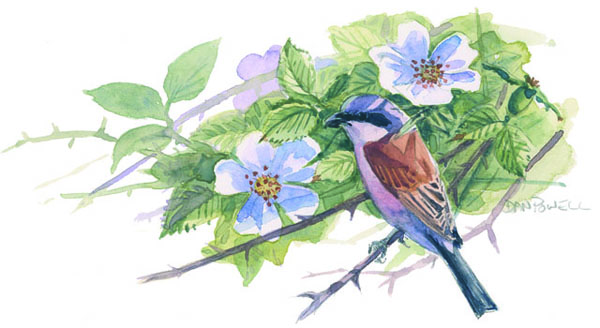 The decline of the UK Golden Oriole population reached a new nadir in 2010, with no pairs confirmed breeding. The outlook for the Red-backed Shrike may be a little brighter, however, with three breeding pairs and the first recorded breeding in England since 1992. Breeding numbers of both Firecrest and Bearded Tit rose to new record heights in 2010, and there is good reason to suggest that there are now more than 1,000 breeding pairs of Firecrests, despite the recent run of cold winters. In contrast, there are some indications of weather-related declines of Woodlark, Dartford Warbler, and perhaps also Cetti's Warbler. Order yourÂ back issue, or subscribe today