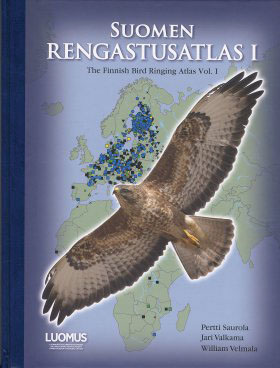 Finnish Museum of Natural History and Environment, 2013, hbk, 551pp; many colour photographs, maps, graphics ISBN 978-952-10-8572-7, Subbuteo code M21673, £42.99 Although geolocators are now used in large numbers and satellite transmitters are getting smaller every year, bird ringing is still one of the main tools of bird research. One of the main aims of bird ringing has been, and indeed still is, the migration of birds; and in the last decade or so there has been a marked increase in the publication of books dealing with analyses of bird migration through ringing recoveries on a national level. The monumental Migration Atlas for Britain & Ireland in 2002 (Wernham et al.) was followed by other national atlases from Sweden (2001/2008), Norway (2003/2006), Denmark (2006), the Czech Republic and Slovakia (2008), Italy (2008) and Hungary (2009). Now the first volume of the Finnish Bird Ringing Atlas has been published. Since rather few people outside Finland speak Finnish, the authors have produced an almost bilingual introduction as well as English summaries for every species account, and English subtitles for all figures and tables. The introductory chapters contain information about bird ringing in general and in Finland as well as a detailed description of the methods used for analyses of the recoveries. I was surprised that only birds ringed in Finland were included and not those ringed abroad and refound in Finland. I especially liked the chapter dealing with legendary Finnish ringers - did you know that that there has been a 'ringer of the year award' since 1971? All the chapters are beautifully illustrated with well-chosen photographs, the layout is just perfect and the text is an easy but informative read. Bird ringing is used in many aspects of ornithology. To do a complete analysis of the ringing recoveries of any country could fill many books. Therefore, any migration atlas unfortunately needs to concentrate on certain subjects. The species accounts of this first volume contain the non-passerines from swans to skuas. They are of varying length and usually contain - when the number of recoveries allows - graphs of ringing totals per year, cause of death, timing of migration, migration direction and age distribution of recoveries. In addition, maps show ringing sites and locations of recoveries according to finding circumstances and/or age. The better the data, the more maps and graphs are presented; for example in the Golden Eagle Aquila chrysaetos account there are seven graphs and 17 maps! All of them are well designed and the message is clearly visible. Each species also has a table with data on ringing totals and number of recoveries, oldest individual, longest distance covered and fastest migration speed. The summary includes a description of the status in Finland as well as an analysis of the graphs and maps presented. This is a superb migration atlas - actually the best I've ever seen! Although I would rather like to see a detailed analysis on a European, or preferably Palearctic, level, I can't wait to receive the second volume! Jochen Dierschke Buy this book from theÂ British BirdsÂ bookshop which is run byÂ Subbuteo Natural History Books This means thatÂ 5% of all sales generated byÂ British BirdsÂ subscribers, whether it is books reviewed in the journal, featured on its book page or listed on the Subbuteo website, will be paid toÂ British BirdsÂ - and will directly support the production of the journal.
Volume:
Issue 7