BB eye: An update from the British Birds Charitable Trust

January 2018’s BB eye outlined the history of the British Birds Charitable Trust (BBCT), including how it was set up in 2000 as a charity that would own the shares in BB 2000 Limited, the trading company that publishes and sells British Birds (Brit. Birds 111: 2–4). More than three years have passed since then, and we, the trustees of the charity, thought that it was time to bring readers up to date with how the BBCT is faring, and what we are doing.

Thanks to a continued strong uptake of subscriptions to British Birds, reflecting the quality of contributions from authors and the skill and hard work of our editorial team, and to good cost control by our staff and directors, the surplus available to be paid to the charity has increased – in recent years, some £20,000 per year has been received and the total amount provided since the charity was established has now passed £100,000. The charity has also quietly been encouraging donations from elsewhere, which have helped to increase the funds available for grants.

As a result, the charity has changed its policy regarding the selection of projects to be funded by its annual round of grant awards. We no longer restrict ourselves to projects that are nominated by trustees and the directors of BB 2000 Limited, and now invite proposals from anyone.

More publicity around the availability of grants has prompted more applications. We are pleased to report that last year we received 18 applications for grants, of which 10 were successful. While it will be disappointing for those who missed out, it is good that the charity is now attracting plenty of high-quality applications.

So, what do we look for when assessing applications? First, they have to fit within the charitable objectives of the Trust, namely promoting the study and conservation of birds and their habitats. Consistent with the focus of British Birds itself, our main focus is on projects relating to both Western Palearctic birds, including their migration routes and wintering grounds, and birds in United Kingdom Overseas Territories. Projects are assessed on their contributions in three main areas: the generation of new ornithological knowledge; the conservation of habitat; and the encouragement and education of people, particularly young people, about birds. We recognise that many wildlife and conservation charities have numerous calls on their resources, so we welcome applications to provide further funds for bird-related projects that they otherwise might struggle to support.

To give some idea of the range of projects we have supported, here are a few examples:

The BTO’s Common Cuckoo Cuculus canorus tracking project (a recipient of a donation) shows how the advance of new technologies has opened up new opportunities for research. The technology is not always cheap, and we have received a number of applications to help fund its acquisition.

We provided funding for Simon Gillings of the BTO for equipment used in his study of the effect of artificial light at night on migrating birds by monitoring bird calls in and around Cambridgeshire, the results of which are set out in a paper recently published in Ibis (https://onlinelibrary.wiley.com/doi/10.1111/ibi.12955). This has shown that migrating birds appear to be attracted by the areas of artificial light emanating from urban areas.

We have provided a grant towards the BTO’s Short-eared Owl Asio flammeus tracking project (https://bit.ly/3pafnHy). The project is still ongoing but the results so far have provided insight into the considerable distances covered by owls in a single season, with one female apparently breeding first in Scotland and then moving to breed in Norway later in the same summer, and another heading south from Scotland to Morocco in the autumn.

We have supported conservation initiatives including rat eradication at Blakeney Point, cleaning up plastic waste on Aldabra and the extension of the Becheve reserve in Nigeria.

Concern over the decline of the Eurasian Curlew Numenius arquata (Brit. Birds 114: 341–350) has generated a number of applications for grants, and we have supported work being carried out in Shropshire to try to reverse the very poor breeding success of the population there, the development of a toolkit comprising a series of factsheets with advice and information to help surveyors and fieldworkers being developed by Curlew Action, and radio tagging of Curlews in Wiltshire.

We have supported a number of projects involving capital expenditure on buildings, including funding the observation tower at Spurn Bird Observatory and contributing to the Flamborough Observatory’s seawatching shelter, an observation hut at Walney, and a hide at Hengistbury Head. 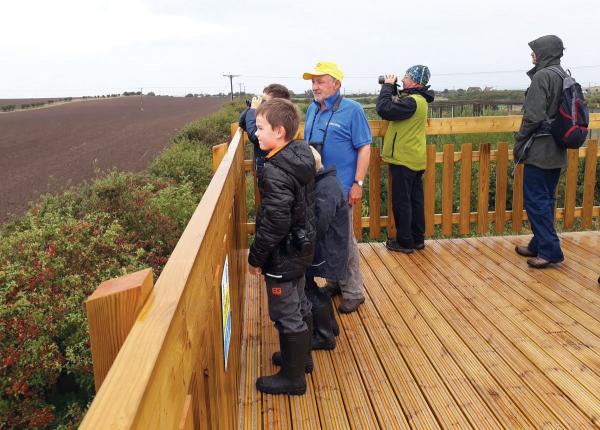 In 2018, we awarded a grant to Batumi Raptor Count for its education programme, which aims to reduce the threats faced by migrating raptors in Georgia.

Encouraging young birders remains a key area of support. We have continued the Young Birders’ scheme, and are grateful to Nina O’Hanlon for her help in administering it, although this was effectively suspended as a result of the Covid-19 pandemic last year. A number of other projects we supported also had to be suspended, and the trustees decided that they would be happy for grants to be rolled over until restrictions were lifted and the projects could proceed.

There have been changes in the membership of the Trust since we last reported. Bryan Barnacle and Ian Newton both retired at the end of their respective terms, and we would like to record our thanks to them for their considerable contributions over the years. We are pleased to welcome Eve Tigwell and Tim Birkhead as their replacements. This summer also sees the retirement of our longest-serving trustee, Richard Porter, whose contribution as a trustee and director over the years has also been considerable. We are delighted to announce that Adrian Pitches, ex-director of BB 2000 Limited and compiler of ‘News and comment’, has agreed to join the trustees as Richard’s replacement.

As with any body of this nature, we have succession planning as a permanent item on our agenda. We anticipate that our next vacancy will be for a trustee to become involved in the grant assessment process. If you have experience of this and would like to help, or know someone who does, please contact us.

We are always looking for suitable projects to support. If you are involved with one, or would like to nominate one (with the consent of its organisers), please do contact us. Now that we have more money available, the amount we can award is greater and the latest round of grants included awards of up to £3,000. Applications for the next round of grants should be submitted before the end of September 2021, with decisions made and grants awarded by December 2021.

We also welcome donations to help fund grants. Please contact us by e-mail or write to us to find out more.

We would like to record our thanks to the executors of Trevor Poyser, to A. Pelham Burn, P. Potts, J. Smyth and other, anonymous donors for their kind donations.