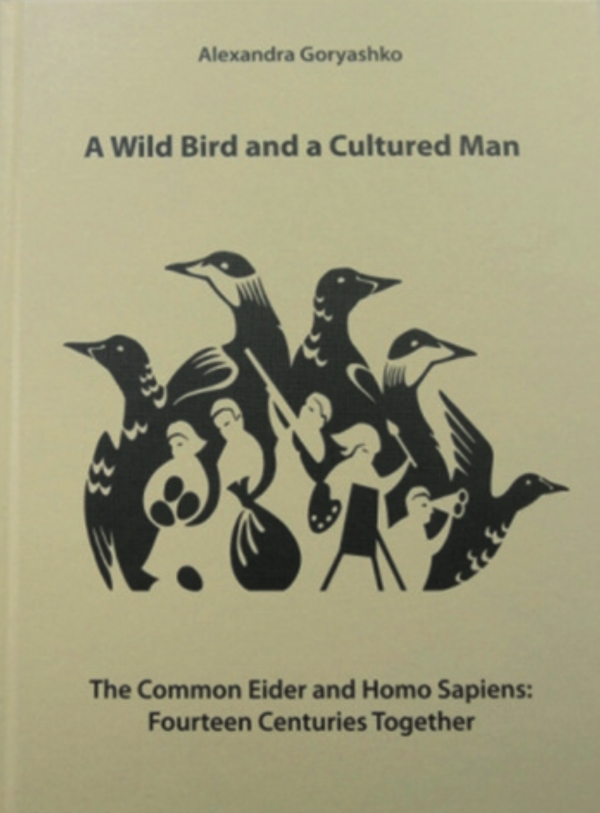 Alexandra Goryashko has studied the Common Eider Somateria mollissima for over 40 years while working in the Kandalaksha Nature Reserve, near Murmansk in northwest Russia. She is a prolific author, having over 190 articles and three books to her name. This volume, which was five years in the making and involved collaboration with around 200 experts from a number of countries, is a comprehensive review of the interaction between Eiders and humans over the course of 14 centuries.

The book comprises 21 chapters in five distinct sections, each chapter being introduced with an original miniature artwork vignette. The first section provides a detailed introduction to the ecology and biology of Eiders throughout the year, and is co-written with a well-known Russian expert on diving ducks, Alexander Kondratiev. Subsequent chapters describe the history of Eiders and humans (from St Cuthbert in the seventh century to the modern day), and a variety of topics including Eider farming, Eiders in literature and art, the bird’s relevance to the lives of recent polar explorers and a section on the legends and misunderstandings that surround Eiders.

This is a saga about the nature, culture and history of several countries that support Eiders and the communities that depend upon them. It addresses questions regarding the history, ethnography and even the methodology of the science used in their study. Many original sources in Russian and English have been included, as well as from the Icelandic, Norwegian, Danish, and Finnish literature. This painstaking research reveals much new information, brings together a detailed history of the study and conservation of Eiders in Russia, and dispels some popular myths, misunderstandings and beliefs perpetuated in the literature.

This book is beautifully written and lavishly illustrated with photographs and artwork throughout, though its large format and weight (2.2 kg, matching that of an Eider) makes it unwieldy, and the lack of a subject index is unfortunate. Its publication marks a remarkable and outstanding achievement in the history of Russian ornithology, and its translation into English by Paul Voytinsky makes it accessible to the science community beyond Russia.