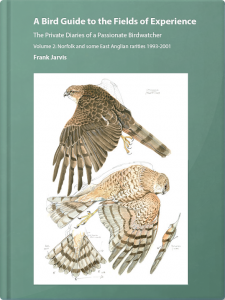 In this second volume of A Bird Guide to the Fields of Experience we once again accompany Frank Jarvis through his beautifully written and illustrated diaries, but on this occasion mainly on his travels in East Anglia between 1993 and 2001. As before (see Brit. Birds 110: 691–692), his lyrical text and carefully drawn illustrations provide not only a feast of avian delights but also a most useful guide to the identification of many of our rarer birds. His prodigious artistic talents at a very early age are apparent from the examples of a small selection of pages from his childhood handmade books.

I particularly liked Frank’s descriptions of certain birds, such as the feeding action of a Jack Snipe Lymnocryptes minimus being ‘like a spring-loaded toy’, while his account of air travel is hilarious and so accurate: ‘Over-wrapped meals, deliberately embalmed to keep you occupied with dolls house plastic knives and forks…’ and ‘Imprisoned like a battery hen, even an air hostess with a moustache or a glass eye would be a welcome distraction.’

Although I never knowingly met Frank, our paths must have crossed on several occasions such as at the Penduline Tit Remiz pendulinus at Titchwell in 1998, the Ivory Gull Pagophila eburnea at Aldeburgh in 1999 or the White-winged Black Tern Chlidonias leucopterus at Kelling Water Meadows in 2001. For those of us that were birding in those halcyon days, this book brings back a plethora of happy memories. Although there are occasional disparaging references to crowds of birders at certain locations, Frank was not averse to ‘twitching’ and on most occasions his patience was clearly rewarded as we are treated to some delightful paintings of his target birds. Like many bird artists, he made the most of any bird corpses that were collected for him by family or friends, and the series of paintings of a Little Auk Alle alle that was found dead on Blakeney Point is a perfect example.

His premature death in 2002, in only his 63rd year, brought to an end the life of one of his generation’s most talented bird artists. But thanks to Jane Ironside, his widow and herself an artist of renown, we are able to see the natural world through Frank’s eyes. I’m sure that I am not alone in hoping that Jane will publish a third volume in this series, covering Frank’s foreign travels.