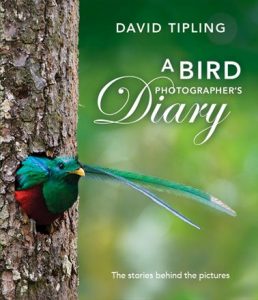 David Tipling’s work will be well-known to most BB readers and a quick check back through the years shows him being a finalist in the BB Bird Photograph of the Yearcompetition six times between 1991 and 2001, after which he was appointed as one of the judges. Over the years, his work has evolved, from photographing many of Britain’s most memorable vagrants, to expeditions to far-flung regions, and subjects such as Emperor Penguins Aptenodytes forsteriin remote corners of Antarctica. His photographs have been exhibited in New York’s Times Square, the Nikon Gallery in Japan and the Mall Galleries in London.

This book charts the path that he took from the very first bird photograph in 1978 – a Great Crested Grebe Podiceps cristatus (on black-and-white film using a Zenit camera with a Vivitar 400-mm lens) – to the current day (using three Nikon camera bodies and a range of top-quality lenses). The images are presented in chronological order with around 100–300 words explaining the story behind each photograph. You may even find yourself included in some shots – maybe watching the incredibly tame Baillon’s Crake Porzana pusilla in Mowbray Park, Sunderland, in May 1989, or among the admiring crowd enjoying the White-crowned Sparrow Zonotrichia leucophrys at Cley in January 2008.

The chosen photographs cover many aspects of David’s portfolio, ranging from a pottery mosaic of a Common Pheasant Phasianus colchicusin a toilet block in Carthage, Tunisia, to a tray filled with specimens of the Ivory-billed Woodpecker Campephilus principalis at the Natural History Museum in Tring.

Unlike many photographers, David makes full use of black-and-white imagery and experiments with slow shutter speeds – at a pre-roost gathering of Rooks Corvus frugilegusin Norfolk, perched birds are in focus and a blurred swirling mass announces the arrival of many more. Instead of the classic shots of King Penguins A. patagonicusat Salisbury Plain in South Georgia that every visitor has taken endless times, he captures an image from the hillside above, presenting a completely different perspective on this awesome spectacle. An image of a Stone-curlew Burhinus oedicnemusfrom Spain is perhaps one that other photographers would have discarded, but this picture, which is badly affected by heat haze, has a strange beauty that captures the bird’s cautious approach – stooping and wary. There are also several photographs of people who interact with birds – including Tari tribeswomen in Papua New Guinea, and a wildfowler with his decoys in Nebraska, USA.

This is a great book for inspiring anyone to go out and travel with a camera. Personally, the shot of the Mongolian eagle-hunters on horseback (used for the cover of Birds and People, by Mark Cocker, published by Jonathan Cape in 2013) always conjures up that emotion within me to go somewhere amazing. Everyone will have a favourite in this book, and that one is mine.