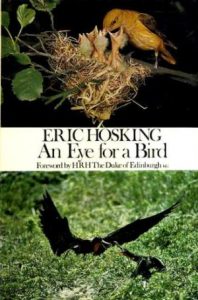 When Eric Hosking’s autobiography An Eye for a Bird was published, in 1970, it was enormously popular, and ran to five hardback and two paperback editions. It has now been transferred to digital format and is available on Kindle. Times have changed greatly as far as the bird photographer is concerned, and this book is a fascinating insight to a bygone era.

Here’s the introduction to the digital version, by Eric’s son David:

Old photographers never die, they just go out of focus

Re-reading this book after a 40-year gap has been a bundle of emotions, bringing back family memories and reminding me of how much photography and our wildlife has changed. Anyone interested in wildlife and photograph will enjoy this record of a by-gone age, when bird watching and photography was the past-time of the eccentric few.

An Eye for a Bird ends with my father’s visit to the Galapagos Islands in 1970. This visit, which he took me on, was the start of my life long career in wildlife photography. After three years at Plymouth College studying photography, I went on to spend the next 15 years working with my father and learning the tricks of the trade. I also married Jean Lane, Frank’s daughter, with Frank being the co-author of my father’s autobiography. Jean took on the wildlife picture agency started by her father in the 1930s: the Frank Lane Picture Agency, which has grown under her management to become one of the leading agencies for nature photographs. 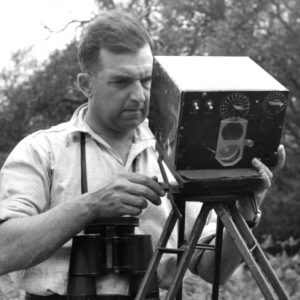 To fully appreciate my father’s black and white bird photographs taken during the 1930s, 40s and 50s, it is useful to understand how difficult it was to take them. Every step of the picture taking process was totally manual, and success relied on in-depth knowledge, experience, patience and calculation. Without through-the-lens viewing (which came later with reflex cameras), the camera was pre-focused with a distance scale to where the subject was expected to be. The exposure was manually calculated, working out the best F stop and shutter speed combination, and hoping that the light intensity did not change before the picture was taken. The light sensitivity of the film was very low, about ISO 10 (compared to an ISO range nowadays of 100 to 25,600). The emulsion was often on a fragile glass base. Only one picture could be taken before reloading with a fresh, unexposed plate. Film holders could only be loaded and unloaded in complete darkness, necessitating a light-proof changing-bag or darkroom. It was quite common to have only 12 exposures for a day’s photography. The glass negatives had to be developed in the darkroom at a later date and then printed as positive prints.

Throughout my father’s career, using the latest technological innovations became his trademark. In the 1930s he pioneered the use of flash bulbs, which replaced the highly dangerous flash powder and made the portrayal of nocturnal animals possible. During the following decade he helped pioneer high speed electronic flash which, when specially modified to operate in conjunction with automatic shutter trips, produced some of the most memorable, never before seen images, of birds frozen in flight. Since my father’s death in 1991, the photographic process has changed beyond recognition, the digital revolution that has opened new doors and made successful photography easy and accessible to everyone. I’m sure he would have embraced these changes even using a mobile phone to record his beloved birds! 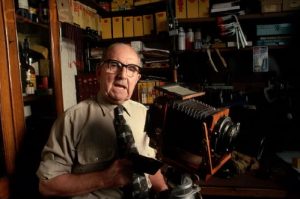 I have updated the chronology at the end of the book to show the myriad adventures that Eric continued to embark on after the publication of this book. Full of energy until the very end, Eric had only just returned from a photographic safari in Kenya before passing away, surrounded by his family, on 22nd February 1991. It seemed only appropriate that his ashes should be spread at Staverton in Suffolk where his career started. When his wife, Dorothy, died on 7th November 2005, we took her ashes to the same spot and as we walked down the wooded glade, a Barn Owl glided past us. A surreal moment which has touched each member of our family that was there.

After my father died I was surprised by the number of people who said how much their interest in wildlife and photography was inspired by his photographs. I wondered if there was a way that this could be continued. The Eric Hosking Charitable Trust was established in 1993 with nine trustees. The aim for the trust is to sponsor natural history and ornithological research through the media of writing, photography, painting or illustration. With yearly bursaries awarded to suitable candidates from any country. Since its foundation more than 37 bursaries have been awarded. All proceeds from the sale of this book will go to support the Trust. More information (and photographs) can be found at the Trust’s website: www.erichoskingtrust.com

I’m very grateful to my son Mark for arranging for the original book to be converted into a digital format, conducting the initial edit and his enthusiasm for making it available to a new generation, who we hope may, like many generations before, continue to be inspired by this entertaining, informative and fascinating account of one of the founding fathers of the art of wildlife photography.