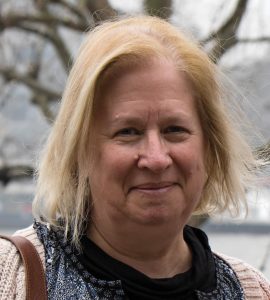 In 1985, when my husband suggested that we could make a life together back in his homeland of Cyprus, one of my first questions was: ‘Will I be able to watch birds there?’ Worryingly, he replied that he doubted it; nevertheless, we moved, initially for a two-year trial, and we are still there, over 30 years and two children later. Fortunately, he was wrong about the birds.

I started school in Britain in 1962 and during the hard winter of 1962/63 preferred to sit at the kitchen window and watch the birds coming to feed on our bird table rather than go to school. From then on I can’t remember seeing a bird and not trying to identify it. In fact, if I’m honest, I can’t understand how other people don’t do that! In my teens, telling prospective boyfriends that I was a birdwatcher was usually the very last thing I let them know about me – it definitely wasn’t ‘cool’ – although I still joined the newly formed Guildford RSPB group in the mid seventies; in fact I was one of its first members. At that time, ‘mansplaining’ was rife and when I pointed out birds to the leader on field trips, I was usually ignored or patronised. Luckily, it didn’t put me off.

Upon our arrival in Cyprus, my husband and I joined the local Cyprus Ornithological Society (1970). At that time there were two Cyprus Ornithological Societies – one formed in 1957, with mainly British expat and military members, the other formed in 1970, with mainly Cypriot members. Somehow I managed to convince them that I knew something about birds and was even asked to serve on the committee and help with proofreading their annual reports.

But then life got in the way of birdwatching, with the arrival of a son and a daughter, and for several years my birdwatching was confined to brief visits to Pagham Harbour in Sussex when back in Britain. However, a family holiday to Rutland Water in 2002 made me realise how much I missed regular birding: things had to change. A former work colleague, Martin Hellicar, was looking for volunteers for survey work for a Masters project on birds and farming in Cyprus and I got involved with that, and at the same time started a distance-learning MA in Values and the Environment from the University of Lancaster. In 2003, the two Cyprus Ornithological Societies put aside their differences and merged to form BirdLife Cyprus (Martin is now their Executive Director); and in 2005 I joined the organisation as their Development Officer.

I remained involved with BirdLife Cyprus after four years in that post, serving briefly on Council, and in the meantime had set up a business running guided birdwatching tours in Cyprus, having been accepted into the small group of locally based regular birders (and putting some effort into my Cyprus list). And in 2013, when Colin Richardson stepped down as BirdLife Cyprus Recorder, the BirdLife Cyprus Council decided I would be the right person to succeed him. I’ve always been a lister and since I like filling in forms and arranging data, this seemed like something I would enjoy. Plus I imagined that there weren’t many female country bird recorders around and I liked the idea of being one of the few. Luckily, there are several good female birders in Cyprus so overt sexism was not rife. Regrettably, and perhaps inevitably, there have been a few annoying comments over the years about the skills of female birders, but I try to ignore them. (Dropping into the conversation with a male birder who took up birdwatching only on retirement that it has been my hobby since the age of five usually leads to a change of subject. But in any case, the reaction is nothing like that encountered in my teens and early twenties in Britain.) And then, when Colin also retired as Chair of the Cyprus Rare Birds Committee in 2015, I was asked to take that on too.

So, from asking my husband if I would be able to go birding in Cyprus, I suddenly found myself as the island’s Bird Recorder with associated duties of editor of the Cyprus Bird Report, Chair of the Rare Birds Committee and, since March 2018, back on the BirdLife Cyprus Council. I now wonder what spare time is! The work of the Cyprus Recorder has changed over the years, in common with that of county recorders in Britain and elsewhere. The number of records I receive increases, seemingly every month, and comes in a variety of forms – scrappy bits of paper, e-mails, Excel spreadsheets and downloads from online sources such as the global portal of BTO’s BirdTrack. Although I encourage observers to send sightings either in Excel or via BirdTrack, I like them to use whatever method they feel most comfortable with, even though this can have repercussions on my time. The data from e-mail lists have to be entered onto the main Excel spreadsheet each month, and of course it’s me who has to do it. Cyprus now has a solid core of regular observers who send in their records each month – a mix of residents and visitors, Cypriots and others, and it is a priority to ensure that their records are captured. I use Twitter and other social media to try and encourage visiting birders to send me their sightings and I’m also keen for bird news to be readily available, especially during migration. In the past, and with a few notable exceptions, birdwatching has not really appealed to Cypriots and has been seen as a cliquey British expat activity. The outreach and education work of BirdLife Cyprus and the spread of digital photography has gone a long way to changing that.

One of my priorities as Chair of the Rare Birds Committee was to set up terms of reference and ensure its independence from BirdLife Cyprus. Most of our work is done via e-mail but we meet at least once a year. We are currently setting up a website with a view to ensuring the transparency of our work and increasing public knowledge of the Cyprus list. Inevitably, all the work I do is voluntary, like that of most bird recorders and members of rarities committees. We do this work because we enjoy it, and while I may have said yes to being the BirdLife Cyprus recorder in part because I knew that I would be one of the few women doing such work, and wanted to encourage other women to break into what has traditionally been a male-dominated environment (and I’m pleased to see that there are now three women recorders in Britain), my main motivation is to ensure that Cyprus has an accurate and reliable database of bird records. Happily, I have to report no gender-related issues at all.

Most importantly, despite all the paperwork and data input, I still manage to get out birding at least three times a week, and have been lucky enough to add two new species to the Cyprus list – a Rustic Bunting Emberiza rustica at Paphos in late 2016 and a White-eyed Gull Ichthyaetus leucophthalmus at Larnaca in the summer of 2017. Now those were two records I enjoyed adding to the database!