It wasn’t too many years ago that most birdwatchers regarded the species as an entirely stable unit of classification, something approaching a fixed state of being. In the past two decades, however, a steadily increasing number of studies in taxonomy (the way we name, define and classify species), reflecting the availability of new scientific methods and new data to distinguish the differences and relationships between organisms, have eroded that sense of stability. The most common changes consist of ‘splitting’ a single species into two or more new ones, or ‘lumping’ two or more species together. Of course, the taxa concerned are not materially affected: they do not disappear as a result of such reappraisals, because the idea of a species is a human concept. You can still go out and find the birds involved, they will simply be classified differently. However, if you are a conservationist, taxonomic rearrangement can pose real problems: how can you protect species if what qualifies as a species is constantly changing?

Between 2014 and 2016, BirdLife International conducted a comprehensive review of the world’s birds, using new information, applying new techniques (including the use of genetic information to more accurately distinguish species) and applying a set of objective scoring criteria based on species traits such as plumage and wing measurements (Tobias et al. 2010). This review resulted in over 1,000 new bird species (an increase of more than 10%), the majority of which were identified through splitting one known species into two or more species (and, in the case of the southeast Asian species formerly known as Red-bellied Pitta Pitta erythrogaster, into no fewer than 12 species – see fig. 1). 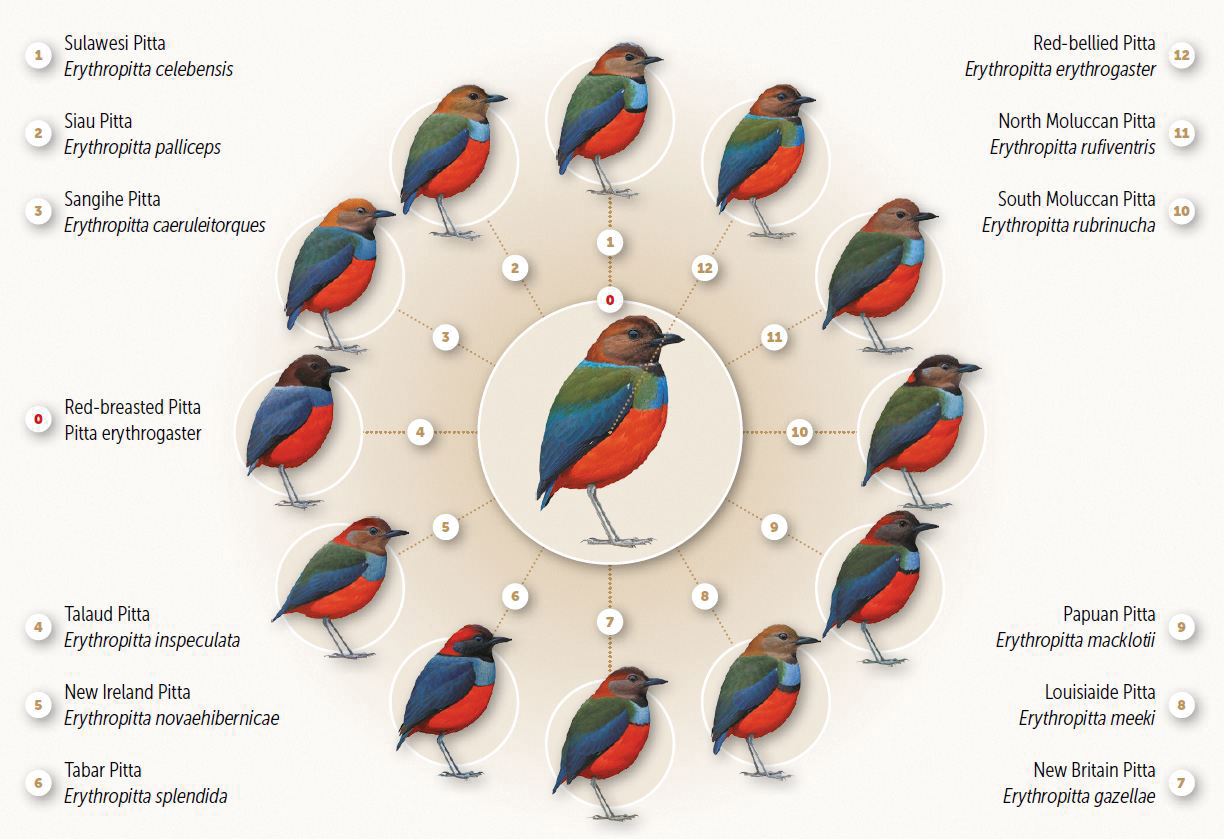 Given that species are often used as the basic units of conservation, any changes to species lists may have a profound impact on our ability to conserve species and prevent their extinction. The taxonomic ‘splitting’ of one species into two or more inevitably results in the newly recognised species having smaller populations and range sizes, so they would be expected to be more vulnerable to extinction. Also, as a result of having a smaller range, they may have smaller overlap with – or indeed fall completely outside of – site-based conservation networks such as Important Bird and Biodiversity Areas (IBAs) and protected areas.

A common criticism of taxonomic reviews is that they often greatly increase the number of species threatened with extinction, spreading limited conservation funding and resources even more thinly. Consequently, some may think that taxonomy and conservation are at odds with one another. Taxonomy aims to identify what counts as a species, something that is constantly changing as new methods of definition become available, whereas it could be argued that conservation requires a more-or-less static list in order to pinpoint where to focus effort and resources most effectively. But how realistic is this portrayal of conflict between these two disciplines?

During my masters degree at the University of East Anglia (UEA), I undertook a study in collaboration with Paul Donald (BirdLife), Graeme Buchanan (RSPB) and Richard Davies (UEA) to determine the conservation implications of BirdLife’s major taxonomic review. We measured how the extinction risk of birds changed following the review, by comparing the IUCN Red List status of species that had been split with those whose status remained unchanged. We also looked at the geographical range of newly split species, in relation to coverage of IBAs and protected areas, and assessed how this had changed compared with their ‘parent’ species. Finally, we analysed whether existing IBAs and protected areas were sufficient to conserve the new species, and whether any major gaps had emerged.

As you might expect, some species were more threatened following the taxonomic review. More surprisingly, we found that, on average, split species were less threatened than those which remained unchanged. This was often because their ‘parent’ species had an extensive range, and many were classified as being of Least Concern by the IUCN.

Furthermore, on average, split species had the same or sometimes a greater proportion of their range covered by IBAs and protected areas following the review. This included the Izu Robin Larvivora tanensis, for which the proportion of its range covered by IBAs and protected areas increased by 90% and 80% respectively. It is worth remembering that this might still not be enough to save a threatened species; nevertheless, it does suggest that site-based conservation can be effective and resilient to taxonomic changes, at least for birds.

Inevitably, we did identify some new species that are missed by or have very low coverage by site-based conservation networks; for example, the Mussau Triller Lalage conjuncta, which is listed as Vulnerable by the IUCN, has no coverage by IBAs or protected areas. In addition, some species did have an increased extinction risk as a result of taxonomic splitting, including some of the species split from the Red-bellied Pitta, which incorporate Red List status rankings varying from Least Concern to Endangered. The newly recognised species that are classified as threatened by IUCN and those that are missed and/or had a reduction in coverage by site-based conservation networks should be prioritised for further conservation action. We also identified three ‘hotspots’ containing large numbers of newly recognised species but low protected-area coverage: Eastern Amazonia, Java and the Philippines. Similarly, it would therefore be a priority to expand the protected-area network in these areas.

These examples should not detract from the fact that, on average, split species were no more threatened after the review than they were before; and that, again on average, the newly recognised species were similarly or even better covered by IBAs and protected areas. More widely, better knowledge of taxonomy is to be welcomed by conservationists. Without it, a lack of awareness could lead to some species becoming extinct – without us even realising it. Taxonomic progress, based on reliable data and appropriate methods, creates a more accurate list of the world’s species. In turn that means that conservationists are better placed to determine extinction risk and prioritise what to conserve, thereby using our limited resources more effectively. Some might argue that splitting benefits conservation, making it easier to find funds and to showcase genetic diversity for species rather than ‘mere’ subspecies. The counter argument is that too many threatened species makes it even harder to prioritise. Our study reinforces the conclusion that better knowledge and the most accurate taxonomy is the best outcome for conservation, with no bias towards lumping or splitting. And consequently, as new techniques and methods become available to better understand the taxonomy of the world’s species, we should embrace them: because to conserve a species, we must first identify it correctly, to avoid the risk of losing it forever.

Readers can find more information about this study (Simkins et al. 2019) at: http://bit.ly/2Rcmzn9

Ashley Simkins is a Technical Officer in the Global Science team at BirdLife International, working on a range of science projects, particularly on the IBA and Key Biodiversity Area (KBA) programme.