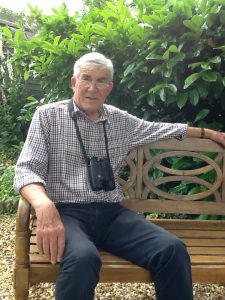 I recognised the calls at once. Luckily, my bins were close at hand and in seconds I was watching two very handsome adult Mediterranean Gulls Ichthyaetus melanocephalus circling over the village. It was March 2017 and this was the 148th species on my ‘house list’, which I’ve been working on for about 40 years.

Competitive listing doesn’t really interest me, but I have to confess to feeling some satisfaction from having one of the top ‘home birding’ scores in the county. Like many birders, I find keeping a house list good fun, but I don’t fret about the rules. As far as my list goes, I make the rules (and change them if the whim takes me) and I am the Records Committee.

It will be great to hit 150 one day, but it may take some time as any additions are likely to be fly-overs, which already easily outnumber all the local birds seen in and from the garden. Being close to the Great Ouse in what used to be Huntingdonshire (now Cambridgeshire) and in the middle of a long chain of wetlands and waterbodies that were once gravel workings means that wildfowl are frequent and passage waders and other waterbirds are reasonably common: highlights have included a Eurasian Bittern Botaurus stellaris and, in a passing party of Mallards Anas platyrhynchos, a drake Garganey Spatula querquedula. There have been some wholly unexpected things too, like the immature Northern Gannet Morus bassanus that came over with a group of large gulls.

Eyebrows were raised and I was accused of cheating when I added Black-throated Gavia arctica and Great Northern Divers G. immer and Velvet Scoter Melanitta fusca to my list. This I was able to do by climbing into the top of my apple tree, from where (with a telescope) I could see a part of the nearest gravel-pit on days when I knew these birds were there… This tactic is no longer possible: the view has been blocked for some years by a housing development right behind my garden.

Yet that is trivial compared with what else happened. The new houses replaced a scruffy field, irregularly cut for hay, which had fine old hedges and some mature trees on two sides. There was also a reasonable view onto the farmland beyond. This is very typical of changes and habitat loss that are going on all over this part of the country all the time – small changes perhaps, but big ones when you add them all together. My home birding has changed considerably. Gone are the warblers, both resident and on passage, which I used to see, and there will be no more of those special passers-by like Tree Pipit Anthus trivialis, Whinchat Saxicola rubetra and Ring Ouzel Turdus torquatus. Nor will I ever again be able to watch and listen to the Grasshopper Warblers Locustella naevia that nested in the field in two successive years.

Much as I like Blackbirds Turdus merula and Robins Erithacus rubecula, their obvious increase in the new gardens, and the arrival of a few pairs of House Martins Delichon urbicum, seem little compensation. There have been bigger losses, too, with much wider and more complex causes. There used to be Corn Buntings Emberiza calandra singing from the wires beside that field, and purring Turtle Doves Streptopelia turtur in the trees – long gone now, along with the local Yellow Wagtails Motacilla flava and Tree Sparrows Passer montanus. I can still remember crawling on my belly across the lawn to get remarkably close views of a Lesser Spotted Woodpecker Dryobates minor exploring the trunk of the apple tree. In the late 1970s it was the commonest woodpecker here.

It’s not all bad news, though. The birding goes on and is still rewarding – only the cast has changed somewhat. Long ago, I would occasionally pick up a displaying Little Ringed Plover Charadrius dubius over the gravel-pits, but once work stopped and the site became flooded the species moved on. Some time later, when a lot of scrub had become established, Common Nightingales Luscinia megarhynchos colonised and, on a calm evening, I can hear the song of the nearest male. It doesn’t get much better than that.

Without doubt, the most significant contributors to the credit column of the avian balance sheet have been birds of prey. Eurasian Sparrowhawks Accipiter nisus are the ones I see most often – it is easy to forget that they completed their local comeback over 30 years ago. Hobbies Falco subbuteo are commoner than they were, usually high overhead hawking for insects, but in late summer often hunting at high speed through the local gardens. Then there are the newcomers, the Common Buzzards Buteo buteo which have spread right across the Midlands into East Anglia, and the Red Kites Milvus milvus, which, inevitably, soon found their way here from the not-so-distant reintroduction area in Rockingham Forest. When I think back to the grim, virtually raptor-free days of the end of last century, I cannot but feel a sense of excitement whenever I see Buzzards high overhead, often with a Red Kite or two not far away. A newer arrival, with just a few records so far, and surely more to come, has been the Common Raven Corvus corax. Having ‘learnt’ my Ravens in the Highlands many moons ago, I still can’t quite get my head round seeing and hearing them in this flat Cambridgeshire countryside.

So much for the fun of listing and musing on the ups and downs of populations and changes in distribution. There is something else about all this home birding that is important to me, which I suppose boils down to what an old RSPB colleague once summed up as what makes birds tick. I see and identify them each day, but I also wonder how much I really know about what they’re up to.

Robin Prytherch’s accounts of his Buzzard studies (Brit. Birds 102: 247–273, 106: 264–279) prompted me to look a lot more closely at what happens here, which, together with news of a pair nesting only half a kilometre away, eventually led me to see that there are four local pairs. I began to age individuals and recognise them through their plumage characteristics, including signs of moult, and to understand both aerial courtship behaviour and territorial disputes. I am a long way from understanding it all, but it makes the Buzzard-watching much more meaningful.

It is virtually impossible to see these Buzzards hunting, but that is certainly not the case with the local Sparrowhawks. Even as I write this, I am almost daily seeing a male from a pair that clearly has young somewhere not far away as he comes ripping through the garden on his smash-and-grab raids. Now and then, it has been possible to watch the wait-and-see method too: a motionless bird in a tree watching for the chance to shoot out after some unsuspecting small bird. Then there are the tremendous stoops from altitude, much commoner than I had ever realised, the end results of which, frustratingly, always seem to be out of sight. An intriguing by-product here has been learning how the local Common Starlings Sturnus vulgaris and Barn Swallows Hirundo rustica have noticeably different alarm calls for Sparrowhawks and Hobbies: usually much louder and more frenzied when the latter appear.

There may no longer be Lesser Spots in the village, but there are more Green Woodpeckers Picus viridis nowadays, especially in winter when they wander widely through the gardens. Along with my wife Eleanor, I have spent a lot of time over the last three winters watching them at the apples we originally put out for the Blackbirds and finding out that the fruit is clearly an important source of food here. Something like this broadens the scope of home birding and is very rewarding, as well as enjoyable. There is life beyond lists and rarities (though I am certainly not knocking either) if you are prepared to take the time to look and learn!