Among British birdwatchers, A Rocha is best known for Cruzinha, its Portuguese centre, where we began tape-luring European Storm-petrels Hydrobates pelagicus in 1990. The original aim was simply to discover whether non-breeders passed the Algarve coast. Since then, over 6,000 have been caught, measured and released. A Rocha now works in partnership with Cardiff University to investigate responses to climate change in migration patterns. Faecal and vomit samples are used to identify prey species using molecular techniques, and by linking this dietary information with year-to-year changes in sea temperature, plankton productivity and the birds’ energy levels, we are building an increasingly detailed picture of how climate change is affecting marine ecosystems. Twenty-seven years ago, we had no idea that it would develop into such a complex and rewarding study!

It was the same for A Rocha. When Peter and Miranda Harris established Cruzinha as a field study centre and bird observatory, they had no idea that A Rocha would grow into 20 national organisations. Their aim was to protect Ria de Alvor from the kind of tourist developments that were wrecking much of the Algarve coast. So far, the team has succeeded, but only through a combination of work in local schools (which has profoundly changed attitudes), wide-ranging surveys of flora and fauna, constant vigilance, and, sadly, several court battles.

When I joined A Rocha in 1997, I saw that in many ways we are no different from other conservation organisations. We protect and restore some of the world’s best natural areas, for example by planting Huarango forests in Peru, improving Canadian salmon streams, controlling non-native predators in New Zealand, persuading French landowners to create wetlands and, in May 2017, launching the first British reserve primarily for dragonflies, at Foxearth on the Suffolk/Essex border.

Our scientific programmes bring together team members, students, volunteers and visiting researchers to provide the foundations needed for informed protection and management. Each year around 25,000 people take part in our environmental education programmes: workshops, wildlife clubs, summer camps, school visits, etc. Like everyone else, we work hard to enrol new supporters and struggle to raise sufficient funds.

But in other ways we are different. For one thing, we consider it essential to have a Director of Theology. Rev Dave Bookless supports A Rocha teams and also encourages the Church to be more active in nature conservation, or ‘creation care’. Contrary to common misperceptions, the Bible teaches respect for creation throughout both Old and New Testaments, so we see our role in challenging and equipping the worldwide church to better care for the planet as an essential part of our niche within the global conservation community. We recognise that churches urgently need to play a more visionary part, especially as Christians are the most numerous believers. The church is expanding especially fast in tropical countries, which host so much of the world’s biodiversity.

Dave and other A Rocha leaders had a major role in recent regional conferences in Africa, the Americas and South Asia to empower Christian leaders for environmental initiatives. In 2015, Dave spoke at the Micah Global Consultation, challenging Christian development organisations to integrate environmental responsibility into all their activities. Many, such as Tearfund and the Baptist Missionary Society, have long been seeking to do so. 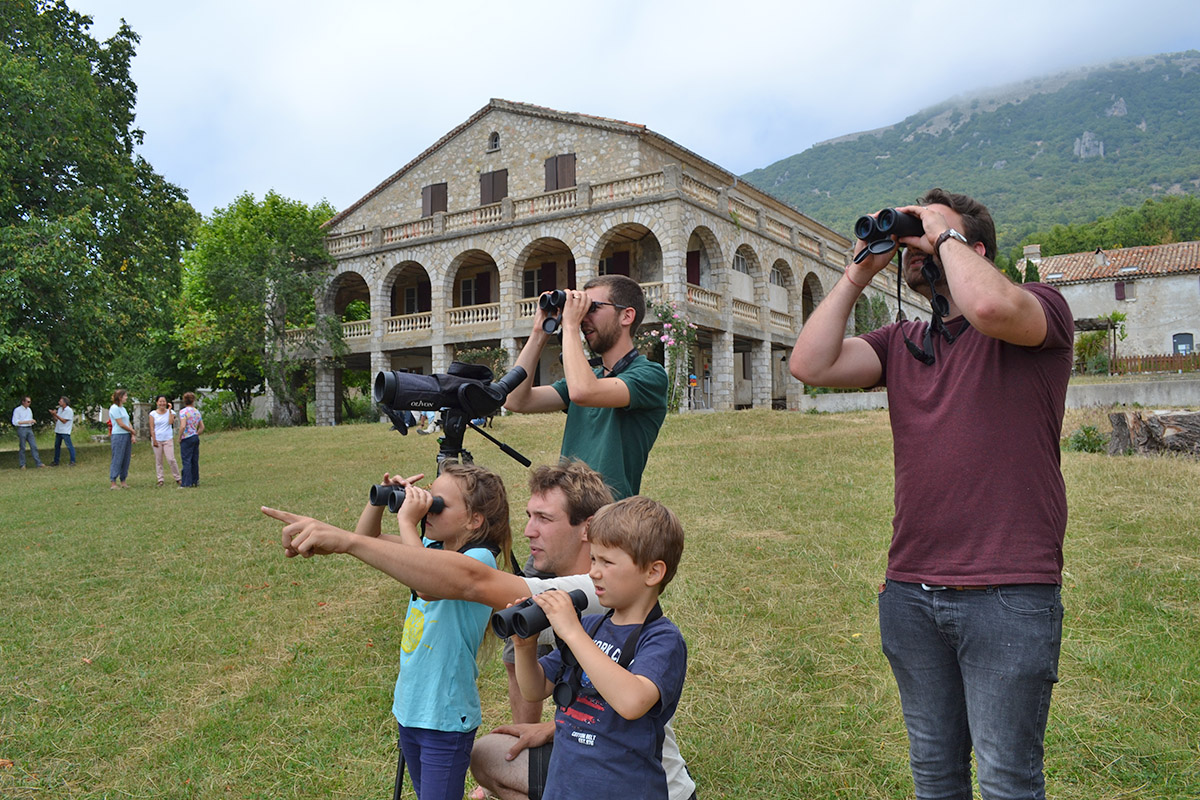 The A Rocha France team at Courmettes, in the hills above Nice, runs environmental courses and provides self-catering flats for private holidays, in a location ideal for walking and birdwatching (www.courmettes.com). A Rocha France

Earlier this year, Peter Harris taught pastors and student church leaders at Nigerian colleges. At Jos University, the majority of Natural Sciences students at his lecture on the value of nature were Christian. He also preached to a congregation of 3,000, whose response was a promise to roll out programmes in ‘thousands of churches across the nation’. If they design environmental projects as fervently as they mobilised to tackle the HIV/Aids epidemic, it could have real impact.

In recent decades, the conservation movement has woken up to the fact that it needs the help of faith communities. After all, 80% of the world’s people describe themselves as belonging to a religious group. We are encouraged by prominent figures such as Gus Speth, environmental advisor to Presidents Carter and Clinton, who said: ‘I used to think that the top global environmental problems were biodiversity loss, ecosystem collapse and climate change. I thought that with 30 years of good science we could address these problems, but I was wrong. The top environmental problems are selfishness, greed and apathy, and to deal with these we need a spiritual and cultural transformation. We scientists don’t know how to do that.’

A Rocha has realised, over the years, that if there is to be an ‘environmental revival’ among people of faith, then it is best done by people of faith. Many A Rocha teams are working with communities where Christianity is not the only religion. For example, A Rocha UK is based in Southall where they have brought together Sikhs, Hindus and Muslims to create Minet Country Park, and Wolf Fields, a community garden and nature reserve. In Ghana, A Rocha runs ‘Faith in Action’ workshops for Christian and Muslim faith leaders, because they have seen how belief systems shape the treatment of people’s surroundings. In the Western Region, where conservation aims included sustainable fishing, protection of beaches from pollution, mangrove regeneration and turtle conservation, attendees responded by reducing pollution of waterbodies and changing the ways they disposed of plastics. When I visited the northern savannahlands, it was a joy to be welcomed into Muslim villages working with us to restore their woodlands.

In Kenya, A Rocha’s focus is on protecting outstanding sites near the study centre: Mida Creek, Watamu Marine National Park and Arabuko-Sokoke Forest IBA. Research in 2000 showed that the majority of local children – from Muslim and Christian communities − did not attend secondary school because their parents could not afford the fees, but many tried to raise funds by illegal logging. So ASSETS (Arabuko-Sokoke Schools and Eco-tourism Scheme) was born, an eco-bursary scheme that enables some of the brightest young people to complete their education. However, they qualify only if their parents join the ASSETS Parents’ Association and agree not to damage the forest. Over the years, education about the importance of forests for local well-being and global biodiversity, plus the involvement of whole families in cultivating tree nurseries for sustainable timber, has notably changed attitudes for the better. Groups eagerly participate in proactive forest protection, such as patrols to prevent illegal bushmeat hunting. In many ways, ASSETS typifies A Rocha’s ethos, as the programme was designed to benefit local people as well as the habitats on which they depend.

Environmental issues can unite communities divided by different faiths and ethnicities, as in Lebanon’s Bekaa Valley, where an eco-restaurant initiated by Chris Naylor (now Director of A Rocha International) and others provides employment for people from Christian, Druze and Muslim villages. Hungry diners come in droves from Beirut to enjoy first-class food and wine, then join tours of the nearby cedar forests and wetlands, which benefit from the restaurant’s profits.

Faith communities, especially in Africa, often find it easier to relate to a faith-based group like A Rocha than to a secular, western conservation organisation. They understand that our motivation springs from a desire to please God. So perhaps this is a good place to explain a little of our biblical basis.

The first biblical hero was a conservationist. In whatever way we understand the story of Noah and his floating zoo (for ‘unclean’ as well as useful species), it reveals a God who cares about biodiversity. Psalm 104, which marvels at God’s provision for all living things, is one of the earliest ecological writings. Humans are only briefly mentioned: the earth belongs to God, who rejoices in all his works. One of my favourite passages is Deuteronomy 22: 6–7, ‘If you come across a bird’s nest… You may take the young, but be sure to let the mother go, so that it may go well with you and you may have a long life.’ It’s resonant with compassion and restraint. Imagine if the western world had taken it to heart − would we still have Great Auks Pinguinus impennis? Would our Golden Eagles Aquila chrysaetos and Hen Harriers Circus cyaneus fill their optimal ranges?

Many of the worst ecological problems are (as Speth says) caused by human selfishness, greed and apathy. The link between sin and environmental degradation is first made, biblically, at the start of Genesis, but is poignantly expressed by Hosea (4: 1–3), who follows a list of sins by lamenting: ‘Because of this the land mourns, and all who live in it waste away; the beasts of the field and the birds of the air and the fish of the sea are dying.’ It’s a remarkably prophetic description of our planet.

What about Jesus? The gospels show Jesus dealing with three areas of broken relationships: with God, between people and with nature, his teaching revealing a deep understanding of natural history. And he told his followers to look at birds! There are many good books on the wealth of biblical teaching, but I recommend Planetwise by Dave Bookless since he not only provides an overview but writes from his experience in pioneering A Rocha UK. He also contributes to blog.arocha.org/

In conclusion, I believe that Christianity offers conservationists five gifts:

Barbara Mearns is the former editor of A Rocha International, a Christian organisation engaging communities in nature conservation.