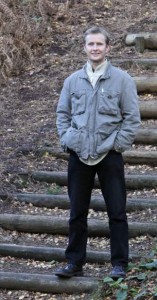 No Way But Gentlenesse – a memoir of how Kes, my Kestrel, changed my life is published this month by Bloomsbury. I should declare an interest at the outset, in that I am willing this book to do well. That’s why this has evolved from a conventional review to a guest opinion piece.

I was lucky enough to befriend the author, Richard Hines, at the first of the New Networks for Nature conferences, on a freezing, foggy December day in Oxford, back in 2009. It slowly dawned on me that Richard was once the boy whose early experiences with a Kestrel Falco tinnunculus inspired the character Billy Casper in the 1968 novel and later the film Kes. Even if Richard isn’t Billy (he has, on occasion, had to live down ‘the Billy thing’), the Kestrel he had trained was very definitely Kes.

I admit to being more than a little bit star-struck in that moment. Richard is a modest, truth-seeking and plain-speaking man, but one for me who – even without fully realising it – occupies a significant place in our cultural history, and certainly in the context of UK birdlore. As I have got to know him better, and we have corresponded regularly, we have shared many thoughts and experiences around the subject of our inspirations in nature, and the particular importance of birds of prey.

Richard has been generous enough to walk me round the focal points of his and Kes’s story. He has shown me locations used for the film, some of which are places important in his childhood, which he spent in and around the mining village of Hoyland Common, near Barnsley. Central to this is Tankersley Old Hall, where nesting Kestrels Falco tinnunculus were the source of the young fledgling he trained, and from which older brother Barry took the inspiration for his novel A Kestrel for a Knave.

Some people think it’s our best film, and Kes also is arguably the most famous British bird of all time. The 1969 film of the novel quickly became a cult, and was broadcast regularly on television. I have no doubt about its impact on me, watching it as a child with my family. It was the talk of our school the next day, and for many days after. It’s intriguing that a film some people consider the best Britain has ever produced, and which a British Film Institute poll ranked number 7, is a film centred around and named after a bird. 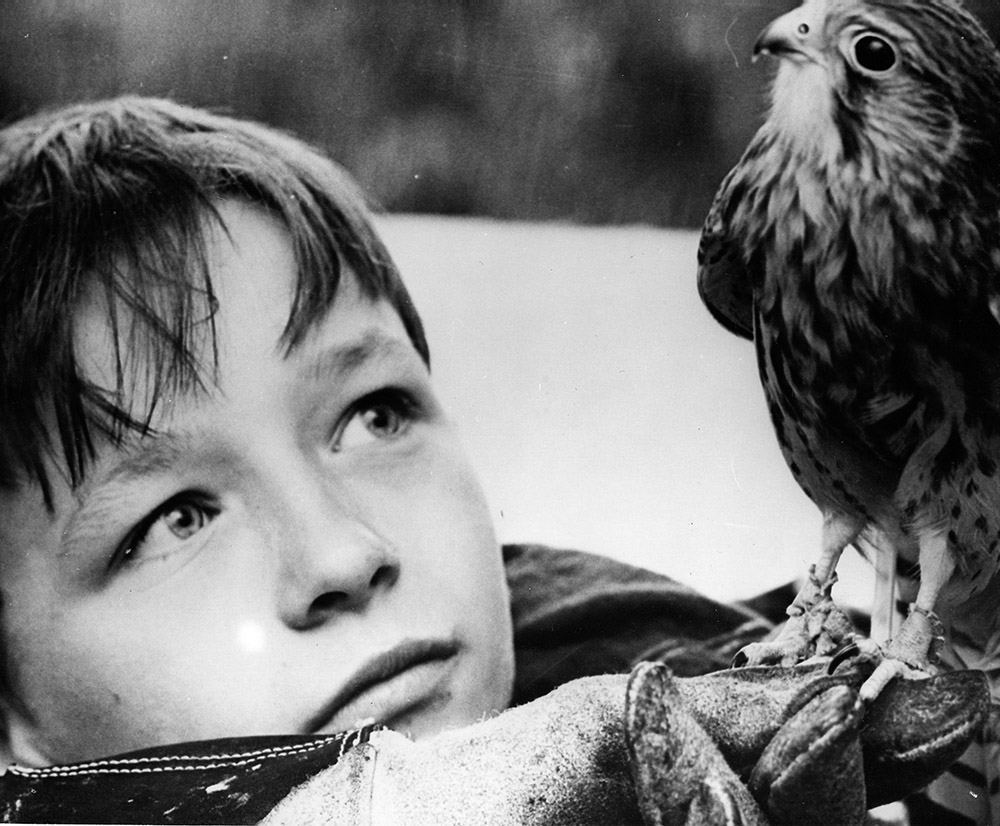 Billy and his Kestrel, from the film Kes

He may be a character from fiction, but Billy Casper feels a bit like a kid we all knew at school, as well as being one most of us actually did know – since Billy’s face (that of the untrained actor David ‘Dai’ Bradley) was printed on the cover of a text often set for students on English literature courses. The image of Billy (and, by extension, his falcon) holding two fingers up to uncaring authority is iconic. I love Richard Hines’s account of how mortified his mother was when this image of defiance appeared on a billboard in their village, advertising the release of the film.

Like Richard I’m interested in the importance of birds to people, and fascinated by the particular significance of birds of prey. I think Kes has played a huge role in creating this place for birds and birds of prey in our lives, our culture, and our sense of selves, of justice, of connection to natural environment made difficult and sometimes impossible for some. Unless you have been a coal miner yourself, it is probably impossible to imagine the value you might have placed on the wild nature above the ground surrounding a pit village. Richard’s father and grandfather were miners. He brings them to life in this book, with great affection.

Conscious that my own interest in birds may bias me, I asked film-maker and cinema historian Mark Cousins why Kes is so important in the context of the British film industry. ‘Kes had great impact for a number of reasons,’ he says. ‘As British cinema grew out of theatre, it tended to stiffness and declamatory-ness. Unlike movies from some other countries, it was suspicious of the “);
update wp_posts set post_content=replace(post_content,’â€’,”naturalâ€. Centring a film on a bird parachuted naturalism into the centre of British cinema.’

No Way But Gentlenesse pulls no punches on the issues of class and entitlement – or lack of – that also made Kes so groundbreaking. Cousins again: ‘If working class people appeared in British films, they were usually heart of gold, salt of the earth cliches. Marionettes of sorts. Kes started from a different social position, a more grounded one.’

In his book, Richard Hines provides new insights on the making of the film, and his own role in the training of the Kestrels used, and of lead actor David ‘Dai’ Bradley. Kes reflected the radical new social realist techniques that the writing of northern, working-class authors brought to literature, and the documentary techniques, influenced by Czech cinema, that director Ken Loach brought to the film. A number of non-actors were employed, including Bradley, and characters allowed to improvise dialogue.

I think Kes carries on a tradition established by the women who campaigned for birds through the late nineteenth and first quarter of the twentieth century, and is manifest today through bird conservation generally and the focus on raptor persecution in particular. Consciously or not, through our efforts for birds we are seeking a better way of things generally, a kinder way of managing nature, and ourselves.

The book’s title comes from Edmund Burke’s 1619 Treatise on Hawks and Hawking. There is, in the end, ‘no way but gentlenesse to redeeme a Hawke’, and the same is true for school ‘write-offs’ like Billy, and Richard. As he describes so evocatively in the book, he too was earmarked in early life and by an inflexible education system to a lesser lot in life. No Way But Gentlenesse is about what happened next.

Author and austringer T. H. White learnt the hard way the truth about this need for gentlenesse, as described in The Goshawk (1951). I have seen for myself how significant the cottage to which White retreated, to tame his hawk and write the book, is to Richard. It felt like a site of pilgrimage when we walked there one bright morning in early spring. He explains this fully in his book.

So, as I say, I have to declare an interest. The autobiography is now published, and I am delighted to see it, as well as having greatly enjoyed this forthright and moving story in its final form. There aren’t many British birds that earn individual fame. Kes is a particular exception, and in a league of its own. As Richard makes clear, falconry, practised well, is an art requiring great skill, patience, commitment and attention to detail. The lives of most Kestrels in the care of schoolboys would be short and ignominious. Today, with developments in captive breeding, there is thankfully no need for Kestrels to be taken illegally from the wild.

Birds of prey don’t, in the end, make affectionate or demonstrative charges, but pets do provide close relationships that work in drama. Billy loved his Kestrel, in a way that would have been impossible to convey through binoculars. Falconer or just plain old bird enthusiast, if you can love something that isn’t giving very much love in return, perhaps that is the greatest love, and is part of the particular resonance of Kes, and totemic power of birds generally.

And if you can set a bird free, as Richard did for the Kestrels immortalised on film, well, even better. Letting go might even be the greatest gentlenesse.

Conor Jameson is an author, conservationist and a Director of British Birds

Barry Hines passed away on 18th March 2016; he was 76 and had been suffering from Alzheimer’s disease. More…