I am writing this in the run-up to a planning appeal inquiry, where I expect to be making representations on behalf of the Berkshire Ornithological Club (BOC) against a scheme affecting one of the county’s most significant birding sites.

The Main Pit at Theale Gravel Pits might be familiar to regular users of the M4. It lies on the south side of the motorway between the Reading Service Area and junction 12 and is the largest waterbody in the lower Kennet Valley (see http://bit.ly/2qb7vrv). These pits were formed by gravel extraction between the 1950s and 1980s and they are ornithologically important for a number of reasons. Part of the Theale and Burghfield complex supports nationally important numbers of wintering Gadwalls Mareca strepera, while in the breeding season there are nesting Oystercatchers Haematopus ostralegus, Little Ringed Charadrius dubius and Ringed Plovers C. hiaticula, Common Terns Sterna hirundo and Cetti’s Warblers Cettia cetti. In addition, substantial numbers of Common Nightingales Luscinia megarhynchos breed in the waterside vegetation (described as ‘Theale’ and ‘Reading’ in Hewson et al. 2018); in total, there are about 100 pairs, which makes it one of the largest populations in the UK. The Main Pit has been identified as a Local Wildlife Site, and is home to 25–30 Nightingale territories; just over the road is Hosehill Lake, a Local Nature Reserve managed by the Berkshire, Buckinghamshire and Oxfordshire Wildlife Trust (BBOWT) for West Berkshire Council. 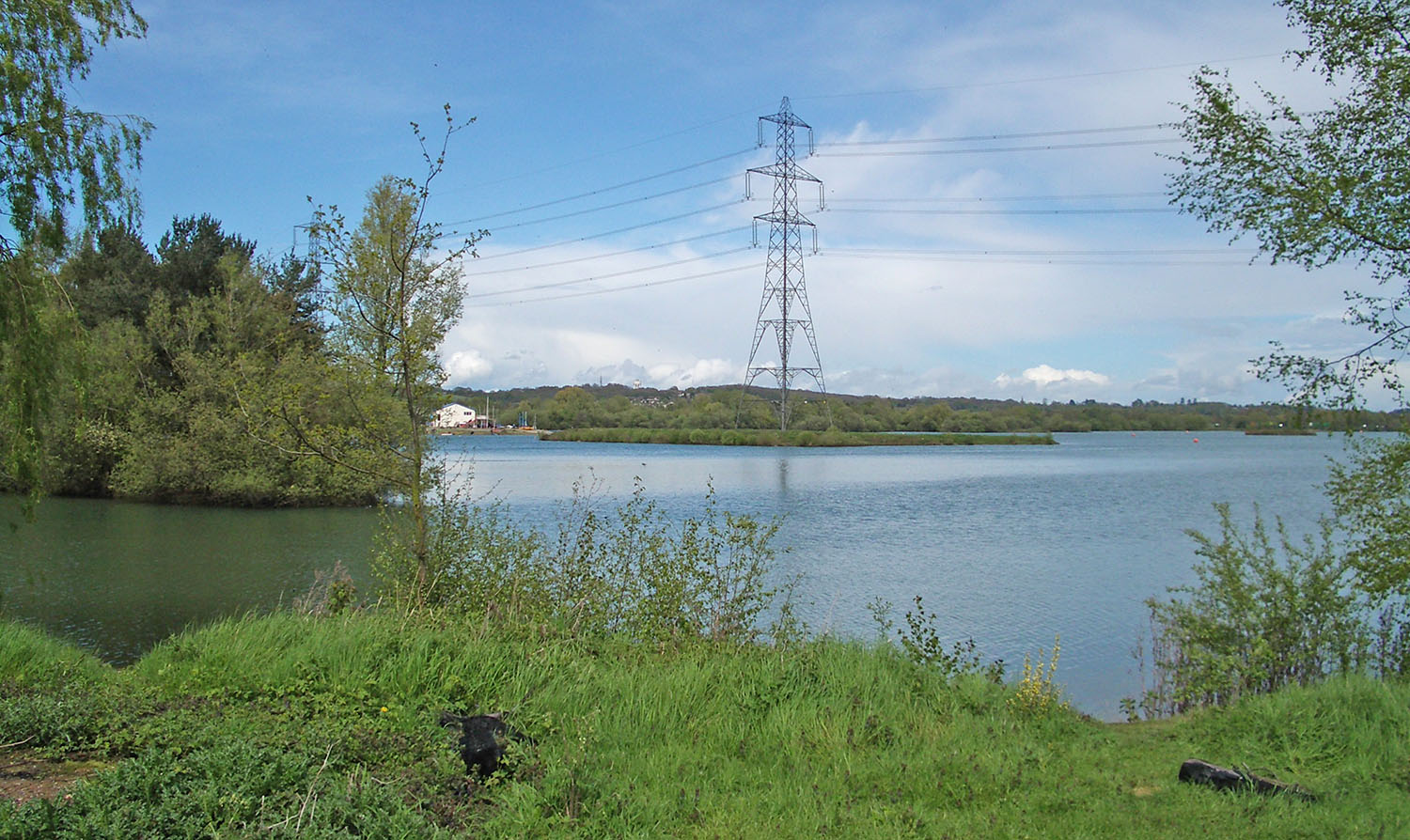 In 2016, a planning application was made for 225 new homes, of which 24 were to be ‘can float’ homes along one shore of Main Pit, while the remainder were to form a conventional housing estate on land in the northwest corner of the site. At first sight this seems an odd place for such a development. Quite apart from its importance for wildlife, the site lies in a flood plain (see www.youtube.com/watch?v=ypuHsPse9Zc), and access to Reading, the nearest major town, is via one of two single-track bridges. The scheme was rejected by the local planning authority at the first stage of the process under the Local Plan for identifying suitable sites for residential development. However, Prudential Assurance paid over £3 million for the site in 2006, and it is arguable that West Berkshire Council has not identified sufficient housing sites beyond a five-year supply.

How does planning policy deal with an application such as this? In England, the local planning authority (which is usually the local district, borough or unitary council, but may also be a National Park authority or a development corporation) has to follow national policy, both when setting the policy they are meant to put in place for their area in a Local Plan (which should establish the criteria by which planning applications are determined) and when deciding individual planning applications where no up-to-date Local Plan policies exist. Until 2012, national planning policy was set out in 23 different Planning Policy Guidance notes or Planning Policy Statements. This often resulted in parties to planning disputes quoting selectively from one or more of these when presenting their case. In 2012, the UK Government drew together a group of four experts (representing the house-building industry, local government, the planning profession and the RSPB) to consolidate these into a single unified policy document.

The result was the publication of the National Planning Policy Framework (NPPF). This established a definition of ‘sustainable development’, which is the benchmark by which local policy and planning decisions have to be assessed. Applications should meet the social, economic and environmental objectives set out in the NPPF; unless all three are satisfied, permission for development should not be granted. Despite opposition from some quarters (most notably the National Trust and the Daily Telegraph), claiming that the NPPF was a ‘developers’ charter’, it was a step forward, in my view. The environmental objectives include contributing towards protecting and enhancing our natural environment and helping to improve biodiversity; and these now have to be part of local policy and planning decision-making.

The NPPF has been revised this year. Unfortunately, Local Wildlife Sites have been removed from the list of sacrosanct sites in the latest version, but local planning authorities remain under a duty to identify, map and safeguard sites of biodiversity value, and to promote the protection and recovery of priority species. Planning decisions still have to protect and enhance sites of biodiversity value, and have to minimise impacts and provide net gains for biodiversity. NPPF 2012 added a proviso ‘wherever possible’ to the latter, which has now been removed. One of the key issues in relation to the appeal at Theale is the impact on the Nightingale population, as a result of both habitat loss and increased disturbance, and the adequacy of the proposed mitigation.

Where does citizen science fit into all this? Guidance to local planning authorities regarding discharging their duty to identify local sites for wildlife pre-dates NPPF 2012. A circular published by Defra in 2006 (06/2005: Biodiversity and Geological Conservation – Statutory Obligations and their Impact within the Planning System) and accompanying guidance notes (Local Sites Guidance on their Identification, Selection and Management) remain current. The latter gives guidance to local planning authorities and encourages engagement with local wildlife groups when identifying such sites. Local societies such as bird clubs usually hold the records that provide information upon which decisions can be based.

One of the problems is that it may not be straightforward to extract the relevant information. Birders are notorious for giving sites names that they understand, but which either mean little to others or differ from the ‘official’ name; while the level of detail in submitted records is often haphazard. Casual records, which often form the bulk of county and club records, tend to reflect where we go birding, rather than providing a true picture of the distribution and status of species of conservation concern. Local tetrad atlases undoubtedly help to fill the gap, and in Berkshire the BOC and Newbury District Ornithological Club’s joint conservation committee has used the results of the 2007–11 local tetrad atlas (http://berksoc.org.uk/county-atlas/distribution-maps/distribution-maps-overview) as the basis for undertaking a review of existing local wildlife sites in the county, and identifying new ones.

Citizen science has contributed towards opposition to the planning application at Theale. Accompanying the application was an ecological report that sought to downplay the site’s importance. No reference was made to the recently published county avifauna (Bucknell et al. 2013), the atlas survey results nor the consolidated online Thames and Chilterns Bird Atlas (http://thamesandchilternbirdatlas.org.uk). All of these were highlighted in our representations against the application. We also used the results from the national BTO Nightingale Survey, while local surveyor Richard Crawford carried out a further comprehensive survey of the Nightingales breeding on the site in 2016, which helped to bolster the case against the proposal. There was relief when in June 2017 the council turned the application down but an appeal was lodged near the end of the six-month period allowed, so we have had to prepare our representations for this too.

Hopefully, the appliance of citizen science will successfully counter the threat to the Nightingales at Theale. And hopefully the experience gained will be useful if there is a similar threat in the future. The lessons for other local clubs from our experience so far include the importance of:

Another lesson is that the Chartered Institute of Ecology and Environmental Management (CIEEM), the body representing professional ecologists, appears to discount information from citizen science. Disappointingly, its recently published ‘Guidelines for Ecological Impact Assessment’ makes no reference to sources such as recently published local avifaunas or atlases, or indeed local faunas or floras at all, nor relevant local ecological groups. In 44 pages of guidance, there is one reference to ‘sharing data’ with local records offices, one to ‘engaging stakeholders’ and one to ‘working together with other specialists’. Instead of citing the wealth of local information derived from citizen science, the Theale applicant’s CIEEM-registered consultant’s reports included results from a CBC-based breeding bird survey undertaken on only three dates, two in March and one on 20th April, well before many summer migrants arrive.

Whatever the quality of the evidence, the public inquiry resumes in January, with a decision unlikely before spring 2019. Let’s hope that the hard work of local birders over many years will help to secure this site’s future for Nightingales, as well as the future of other important sites for wildlife wherever they come under threat.